The following blog post was written by Michael G. Smith originally for motherearthnews.com and I have shamelessly posted it here to further spread his wise words. 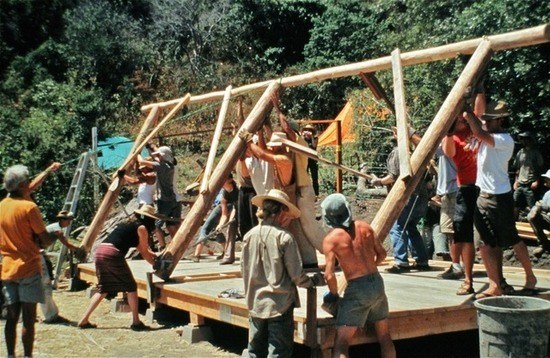 A group of about two dozen people gather on a wooded hillside in Northern California. They are women, men, and children, ranging in age from three to 72. They come from many different backgrounds: students, a professional truck driver, a potter, a couple of architects, a retired bureaucrat, a single dad accompanied by his young son, a woman with severe physical disabilities. They look like a pretty diverse bunch, but they all have at least two things in common: They are here to learn to build their own environmentally friendly homes, and all of them are splattered with mud from head to toe.

I attended my first natural building workshop in Oregon in 1993. After completing a degree in Environmental Engineering, I had spent two years in Costa Rican rainforest, volunteering for a sustainable forest management project. I was searching for ways to use my construction background to make a positive difference to forests everywhere, to help develop building alternatives based on earth that would leave more trees standing. When the workshop was over, I approached the instructor, Ianto Evans of the Cob Cottage Company, and asked if I could join his team.

For the next five years, Ianto and I and other members of the CCC traveled all over North America and beyond, training groups in how to build their own homes from the ground under their feet. Although the constant travel became tiring after a while, I wouldn’t trade those years for anything. I learned so much and met so many amazing people – many of whom remain close friends to this day.

Twenty-seven years later, I still believe in the power of mud to change the world. In fact, the urgency today seems higher than ever before. Worldwide, construction and operation of buildings generate nearly 40% of all greenhouse gas emissions (GHG). To meet Paris Climate Agreement targets, we must eliminate all GHG emissions from the built environment by 2050. The only way this could be possible is if we trim wasted energy from the building sector in many different ways: increasing the energy-efficiency of our buildings by using passive solar principles and excellent detailing; making smaller homes that are built to last much longer than those produced by the profit-driven construction industry; improved materials technology including recycling and carbon sequestration; and the increased use of local, natural materials.

Building with locally-harvested materials reduces GHG emissions from both the manufacturing and transportation sectors, sometimes nearly to zero. For example, many builders harvest clay soil from the building site during the leveling and excavation process, then use it to build the house. Using simple, low-tech techniques that anyone can learn, clay soil can be turned into walls, floors and plasters with only the addition of sand and straw. You can use machinery to mix clay, sand, and straw into cob — or you can use your feet. Building with local materials also concentrates environmental impacts where the communities using them can take responsibility for sustainable management and mitigation. 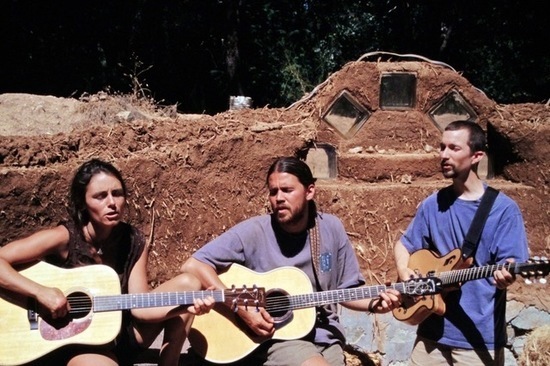 Earthen materials have excellent thermal mass properties which lend themselves to efficient passive solar designs, reducing energy use for heating and cooling over the long run. It’s true that earthen walls have poor insulation value and are not appropriate on their own in cooler climates. But cob can be combined with better-insulating techniques such as straw bale, straw-clay, chip-and-slip, hempcrete, or ricecrete in a hybrid design. The most efficient passive solar designs require a combination of both insulation and thermal mass in the correct relationship to one another. All of these building systems, when properly protected by a thick layer of earthen or other natural plasters, are highly fire-resistant – an increasing concern in our wildfire-ravaged world.

Although it can still be challenging to get official permission to build with natural materials, great strides towards this end have been made in recent years. The International Residential Code, the model code used as the basis for building codes in 49 of the 50 United States, now includes appendices on both straw bale and light straw clay construction. The nonprofit Cob Research Institute recently submitted an appendix on cob construction, which was accepted as part of the 2021 IRC. For the first time ever, states and local jurisdictions will now have a model cob building code approved by the highly respected International Code Council available for adoption as part of their local building regulations. (Find out more at The Cob Research Institute)

While cob, adobe, or rammed earth walls have historically been used to support the weight of roofs and second floors, hybrid designs often include a wooden structural framework. Round poles and locally milled wood from sustainably managed forests will provide the bones of a new climate-resilient architecture, while at the same time generating jobs and increasing fire safety by incentivizing sustainable forest management. We need not only a new framework of regulations and economic incentives to make the use of local building materials more attractive, but also a rapid scaling up of the skills necessary to use these materials safely and effectively.

That’s where hands-on building workshops come in. As I discovered during my years with the Cob Cottage Company, nearly anyone can learn to build a cob wall in just a few days. That includes simple but effective ways to analyze soils and determine recipes for the strongest mix, as well as how to install doors and windows and sculptural techniques such as arch-building.

Nowadays, my workshops also include a foundation in passive solar design and better-insulating wall techniques. Students leave the workshop with both the conceptual and practical tools they will need to contribute to a sustainable re-imagining of buildings. Every home built by hand from the earth rather than being assembled of factory-made components reduces the amount of carbon we are pumping into the atmosphere. Incorporating wood, straw and other plant materials into long-lasting buildings also helps sequester carbon. We are constructing a living library of alternatives that we and our descendants can learn from in the coming decades of experimentation. If all goes well, we’re helping to develop a new building vernacular where every region will showcase its own sophisticated solutions, based on climate, seismic conditions and locally available materials.

The muddy people on the building site are hard at work. In the flat area south of the rising walls, groups of two dance on tarps, their muddy feet beating the disparate elements of clay, water, sand and straw into a coherent mass. Another group takes the mixed cob and sculpts it around a window and door frame. Two women insert electrical wires and outlet boxes into the nearly complete straw bale wall. In the background, several people are stripping bark from round poles for roof beams and rafters. The atmosphere is concentrated, with little extraneous conversation, but also quietly celebratory. The people here know what they are building: not only a beautiful, low-impact shelter for a couple of people, but also a future full of hope for the rest of us.

Find a natural-building workshop on the Cob Workshops page.

Michael G. Smith is a natural building pioneer, credited as bringing cob construction and other techniques back to North America after a century of disuse. He is co-founder of The Cob Cottage Company and is the author of The Cobber’s Companion, the co-author of The Hand-Sculpted House: A Practical and Philosophical Guide to Building a Cob Cottage (Chelsea Green, 2002) and co-editor for The Art of Natural Building: Design, Construction, Resources (New Society, 2nd Edition 2015). He farms with his partner, Cathy, at Spreadwing Farm. Connect with Michael at Straw Clay Wood and Cob Research Institute, and read all of his MOTHER EARTH NEWS posts here.

Michael has also been the resident expert on all things cob and light straw/clay at greenhomebuilding.com  where you can find the answers to hundreds of questions that have been sent to him over nearly two decades. You can ask your own question via this route as well.

1 thought on “Michael G. Smith Writes about the Value of Cob”