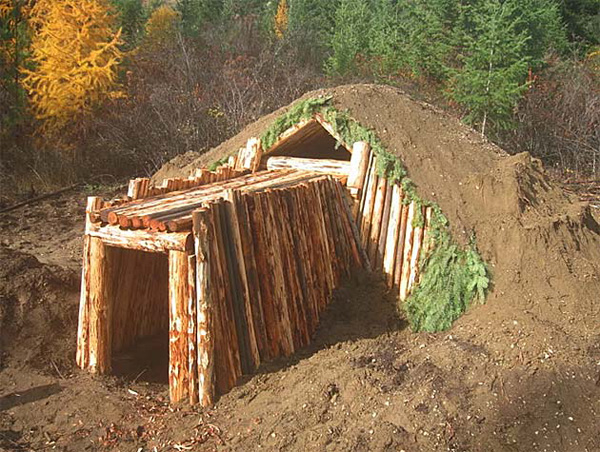 ‘Quiggly Hole’ or earth lodge used by the native people of British Columbia.

“Ever wonder what it would be like to live completely underground? Picture a beautifully built dwelling etched into the ground, used as refuge from cold winter months. This is what is known as a ‘Quiggly Hole’ or an earth lodge used by the native people of British Columbia, also known as The First Nations.

Originals were mostly built of cedar, as this wood is easily split and saws were yet to be invented. Circular in shape, an opening in the top was used as a smoke escape. For most original quiggly holes, a ladder was used to enter the dwelling from this opening as well. You might compare quiggly holes to modern day root cellars. Many people used these dwellings as storage for food that had been gathered and prepared for winter storage. Others used them as make shift kitchens.

Making quiggly holes was not that difficult. It consisted of carving out the earth in a round, circular manner. Logs were used to create the dome shaped roof. The size of the home was often determined by the length of the trees being used. Sometimes they were constructed for just one person, but other times, groups of families would chip in and build a large one together, easing the workload on each person.

Because these homes were actually built INTO the earth, they appear from the surface as circular indentations in the ground. Original quiggly holes were often built in clusters, forming towns or villages, indicating there was a huge population of these people at one point in time. These clusters were built close to game and water, making it easy for people to gather food.”