The last day of the Natural Building Colloquium in New Mexico was open to the general public as the Art of Natural Building Faire. We started out our day with the usual morning circle where several of the key organizers of the Colloquium were honored. This included Michael G. Smith who coordinated the entire schedule for the week; he did an excellent job of  this.

Catherine Wanek, the owner of the host Black Range Lodge and one of the primary coordinators of the NBC, was also honored with a special gift. 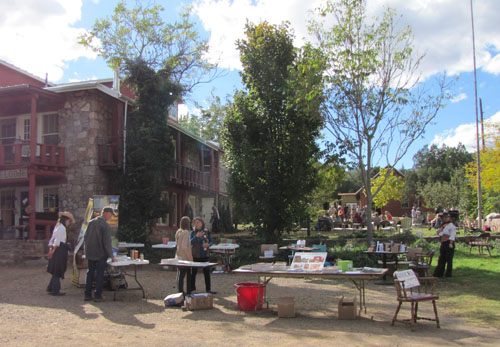 As part of the Faire we had tables of books written by many of the participants where autographed copies were available. Some of the authors also made short presentations about their books. I had the three books available as part of my Green Home Building series and I sold a few of these.

The public had many choices for activities, including tours of local natural building attractions, hands-on demonstrations, and a number of slide show presentations. Joe Kennedy and I co-presented about earthbag building and that was very well received.

Live music was provided by Tim Weed and a group of participant musicians that included Matts Myhrman on the washboard.

The Art of Natural Building Faire, with all of its festivities, was a fitting finale for what was a magnificent week of immersion into the world of Natural Building. We came together with common interests and emerged as a united family with strong bonds that will last for years.