Tour of our finished homestead. The forest garden is now a lush haven for humans and native wildlife. Our banana plants are around 9’-16’ high and producing nicely.

After a long delay, I’m posting another video about our homestead and forest garden. Everything is pretty much finished except small odds and ends. In summary, the project is a major success on many levels – personally, affordability goals, improved health from working in the garden and eating better, and just plain fun and rewarding. It’s great being in nature. It’s definitely been one of the best projects of my life. 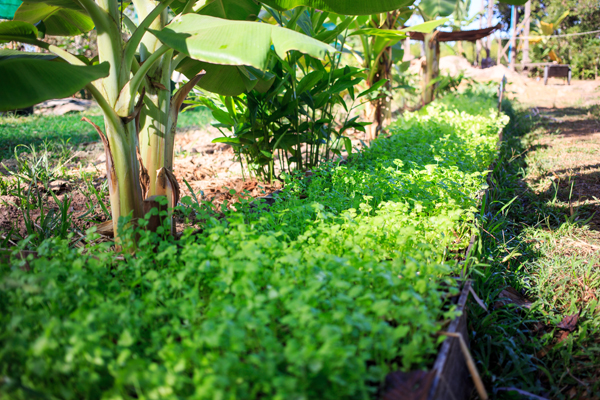 Despite the clay soil in the garden and concerns of flooding, the forest garden is booming almost beyond belief. I’m used to struggling with gardens in Colorado’s harsh environment. Things are way different here! The banana plants are aout 9’-16’ high or even higher and producing nicely. The fruit trees that mostly started out as tiny ‘stick trees’ about 12”-18” high are now upwards of 5’-9’ high and some are already producing fruit. I attribute the success to our tropical climate, gradually adding about 10 truckloads (by hand) of topsoil, rice hulls, rice hull ash, chopped coconut husks, manure, lots of sugar cane compost (my favorite), and 1-2 bags of commercial bagged compost around each major fruit tree. Plus, the roots only have to go down about 2’ before they hit the original rice field and high water table that we built on top of. I still plan to add rock dust, although it’s been difficult to find. In the middle of the garden there’s already a sensation of being in a forest – there’s a hushed calm and profusion of growth everywhere. The garden is already a haven for wildlife – bees, wasps and hornets of all kinds, butterflies, salamanders and geckos, snakes, frogs, birds and bats. Our dogs love it too.

Added details that didn’t fit on the video:
– It’s much more difficult to do videos now that our videographer/photographer son is currently unavailable for making videos. Sorry for the delay.
-The dry season was a non-issue. Even though we get broiling temperatures for months without rain, our well provided all the water we needed. Very few plants suffered. I created a bowl around each tree and watered them every 2-3 days. The larger banana plants and the neighbor’s bamboo provided much needed shade.
– I’ve decided to not introduce worms from elsewhere after reading it’s best to improve the soil and encourage the native worms to multiply naturally. And as reported previously (search our blog for earlier posts) I’m definitely not going to raise worms. It’s better and easier to improve the soil and let the worms increase naturally. (The worms in our garden are enormous!)
-We added recycled wood raised garden beds on two sides of two of the forest garden beds for leafy greens such as kale, spinach, mustard greens and celery. The amount of food produced was incredible. (The soil is resting now during the rainy season.) For a good while I was practically living on baby greens and microgreens of different kinds. Clearly, a garden this size can produce more than enough food for a 5-person household with extra produce to sell or share with friends. Eventually the old boards (scrap wood from the house) will be removed as the garden matures into a more wild state.
-The road base raised bed experiment is not recommended. There’s too much gravel in the soil for my liking. What we did elsewhere is more effective.
-Don’t sweat the small stuff. A few trees will likely die no matter what, especially if you’re planting tiny starter trees. That’s the most vulnerable stage. Some of ours only cost 50 cents or even less. It’s quick and easy to pop in a new tree since the tree hole in the clay subsoil is already dug.
-Sugar cane compost is highly recommended. After sitting several months, the compost attracts worms and gets filled with root hairs. Obviously the plants love it.
-We’re gradually adding small plants such as mint, basil, onions, chives, chili, celery, pumkin and flowers around the fruit trees to create plant guilds. Most prefer to be on the shady side of the tree during the first year.
-We’ve planted three kinds of beans and other ground covers to good effect. The runner type is longer lasting and tends to strangle the smaller trees. They’re key soil builders and easy to grow. The bees love the blossoms and it’s a little sad chopping them down at that stage.
-We trimmed our mulberry trees and planted over 100 8” pieces from the branches. The ends were cut at an angle and we just stuck them in the ground, that’s all. Almost all lived to my surprise. The perimeter of our garden will likely become a wall of mulberry trees this next year. They grow like weeds here and produce a lot of delicious fruit. We’ll cut them off 1’ from the base every year so they don’t get too big.
-I’m not keen on using more manure. A relative experienced major loss from adding too much manure. It’s very concentrated and so plants can grow too fast and become spindly and weak. Manure also introduces thousands of weed seeds that create lots of extra work. Even though we get manure from friends and relatives who raise grass fed cattle, the problems it causes makes using questionable unless it’s first broken down in a compost heap.
-The largest problem was too much water during last year’s monsoon season. The trees had just been planted and excess water built up in some low areas. Pretty much every tree that died or was stunted were in these low areas. Since then the garden beds have been raised several inches with the soil amendments listed above and the soil is looking very good.
-The trees and plants in the garden are now growing at a crazy rate. Some fruit trees are growing 6”-12” per month. Sweet potato vines are taking over large swaths of the garden including pathways. Tree branches are leaning over the pathways. That’s part of the plan. Another year or two and the garden will likely become wild looking as a natural balance develops between plants.
-Advice for others who want to build a tropical forest garden: even though we were warned by multiple experts not to add too many amendments at first (so as not to create a saturated sponge), I suggest adding 2”-3” of topsoil, plus rock dust and possibly some decomposed rice hulls to loosen the clay soil before starting. In other words, do some initial soil building before planting to reduce wheel-barrowing, and add more soil amendments gradually in the future. Mound the beds for good drainage. This approach should not waterlog the young plants as we’d been warned and would have saved a couple hundred hours of manual labor.