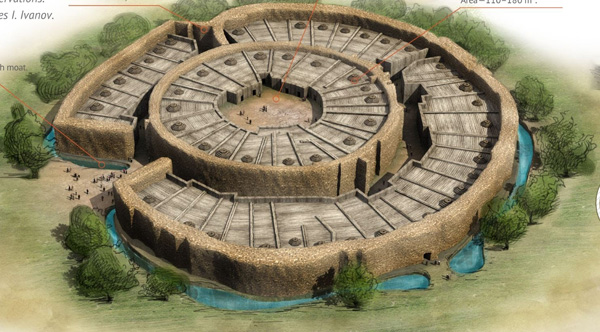 Arkaim is an archaeological site situated near the Kazakhstan border.

There are hundreds or even thousands of ancient historical sites of interest. Arkaim caught my eye because of the interesting shape and history. The defensible design is perfect for rural sustainable communities that foresee difficult times ahead.

“Arkaim is an archaeological site situated in the Southern Urals steppe just to the north from the Kazakhstan border. The site is generally dated to the 17th century BC. Earlier dates, up to the 20th century BC, have been proposed. It was a settlement of the Sintashta culture.

The site was discovered in 1987 by a team of Chelyabinsk scientists who were preparing the area to be flooded in order to create a reservoir.

There are four entrances into the settlement through the outer and inner wall with the main entrance to the west. The dwellings were between 110–180 m2 (1,200–1,900 sq ft) in area. The outer ring of dwellings number 39 or 40, with entrances to a circular street in the middle of the settlement. The inner ring of dwellings number 27, arranged along the inner wall, with doors to the central square of 25 by 27 m (82 by 89 ft). The central street was drained by a covered channel. Zdanovich estimates that approximately 1,500 to 2,500 people could have lived in the settlement.