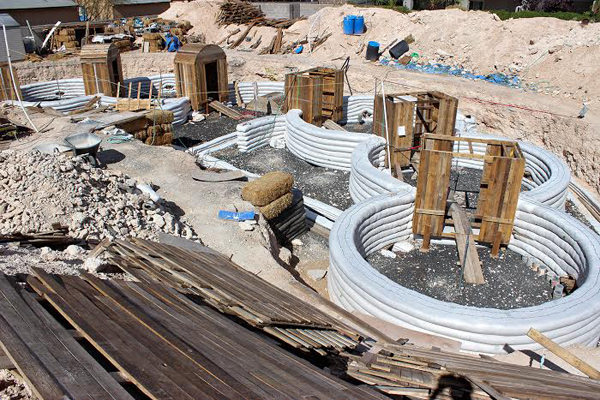 LAS VEGAS, Nevada – Oct. 23, 2015 – In a cozy residential neighborhood amidst the never-sleeping city of Las Vegas, a home of a new breed is being born. Liz Kerby had a dream and a plot of land. She wanted a 100% sustainable home that she could love and have it love her back. Rather than go the more conventional route of homebuilding, Kerby opted for a far more earth-friendly, albeit extreme, choice. “Open Arms Domes”, as her soon-to-be dwelling was dubbed, is a Superadobe/Earthship hybrid home consisting of 7 domes, off-the-grid utilities, and a greenhouse entryway that also serves as the house’s heating source. And in August, the city of Las Vegas finally said “yes” to her build.

Superadobe is a sandbag and barbed wire construction technique developed by the late Iranian architect Nader Khalili, founder of CalEarth in Hesperia, California. Thus, it was an easy decision for Kerby to choose a designer for her eco-friendly build. Erik Ven, founder of Gaia Earthen Technologies, is a CalEarth alumni, and the only CalEarth-authorized provider of off-site Superadobe workshops. Together with Kerby, Ven helped bring shape to the home that she had once only dreamed of.

The site began coming to life in October of 2014 when the first preparations were made. The land was excavated and groomed by Ven, like-minded volunteers, and Gaia Earthen workshop participants wanting to gain their own expertise in do-it-yourself sustainable building techniques. By definition of earth-building (consisting of over 90% earth beneath your feet), all excavated soil would then be placed into long sandbags and coiled to form the 7 beehive-shaped domes and conjoined vaults that will fashion Kerby’s Open Arms Domes residence.

Acquiring the permits to move to that next step was no easy feat for Kerby and Ven. Sustainable houses, while becoming quite chic, have yet to see the light of day outside of backwoods locations. To place this unusual and off-grid abode amongst traditional residences in a prominent city proved to be quite an undertaking. According to Kerby, it took seven months of revisions and compliances to the design plans before the City of Las Vegas Department of Building and Safety signed off on them, allowing for the very first house of its kind. “Finally receiving the permits was so exciting!” exclaimed Kerby “All of the cooperation between us and the building department paid off and not just for Open Arms Domes; we were able to pave the way for other people who want to live sustainably off-grid, and still be within a city neighborhood.” Making the permit process easier on the next earth-builder wasn’t the last public benefit of Kerby’s project. The affordability of such a venture (lack of building costs and utility bills) makes on-site training beneficial to displaced individuals as well, that aspire to create domes of their own for living or emergency shelter.

With permits in hand, Kerby’s Open Arms Domes house is now underway and being built from the ground up (quite literally). Volunteers and Gaia participants are giving form to function while learning the techniques, trials and solutions of building from the earth. “It is amazing to see it taking shape”, stated one builder, who travelled from Bogota, Colombia to be a part of the event. Participants have come from Australia, Britain, Florida, and many other great distances to partake as well, leaving with the knowledge that they desire to begin their own earth-friendly ventures. If you, too, would like to take part in their eco-modern type of Vegas experience, take a workshop, volunteer for a day, or simply follow their progress, join them on Facebook at The Open Arms Domes.