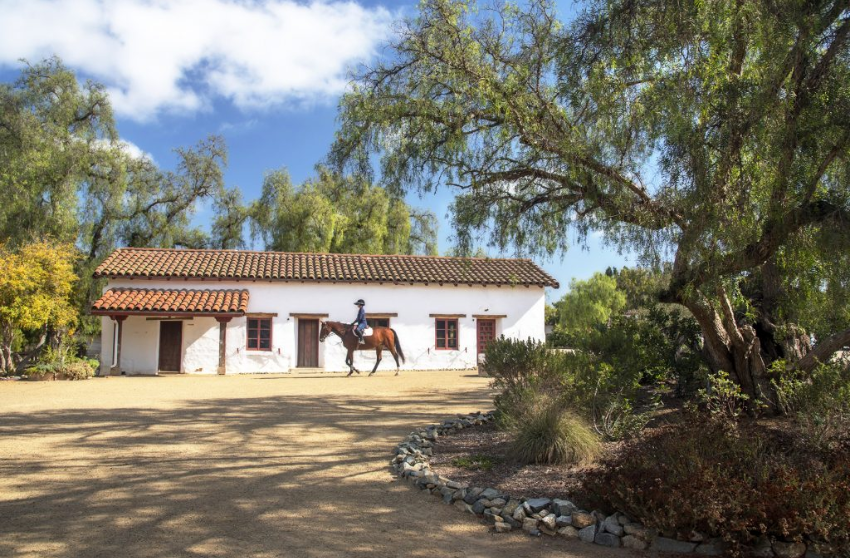 Much of our local adobe rancho history has crumbled into ruins, a trend that changed course at the turn of the 20th century, when gentleman farmers looking to escape urban life moved into the area to plant citrus groves in Escondido and develop equestrian facilities in Rancho Santa Fe. With a renewed interest in a simple life where handicraft and living close to nature was emphasized, landowners and their architects restored abandoned adobe structures and built new hacienda-style and Spanish Revival homes using bricks of native adobe mud.

The popularity of adobe ranch homes enjoyed another revival in the 1950s, though smaller in scale and in urban and suburban settings. The romance of these adobe homes is represented by the use of rough-cut beams, tile roofs, practical floorplans and commanding views.

Modern adobe construction wasn’t rare in San Diego’s North County, but it also wasn’t common — until a revival in the late 1940s.  In the mid-20th century, it became so popular in the region that today the Escondido area has the highest concentration of adobe homes and structures anywhere in the country outside of New Mexico.

Given the thermal properties of thick adobe wall construction, which allows for less use of energy for cooling and heating, adobe builders were creating environmentally friendly “green” homes well before there was a call for such a thing. Many of the homes were built with bricks made on site, reducing the need for shipping.

In the early 1980s, the state of California made significant changes to building codes – most notably seismic restrictions – which slowed the adobe building boom. As a result, though homes have been built featuring non-structural adobe brick facades, the era of true adobe home construction came to an end.

Because adobe houses will never be built on a large scale again in California, the collection of existing homes across San Diego’s North County is a finite treasure that requires the stewardship of people willing to maintain these now irreplaceable structures.

You can read the original article at www.valleycenter.com