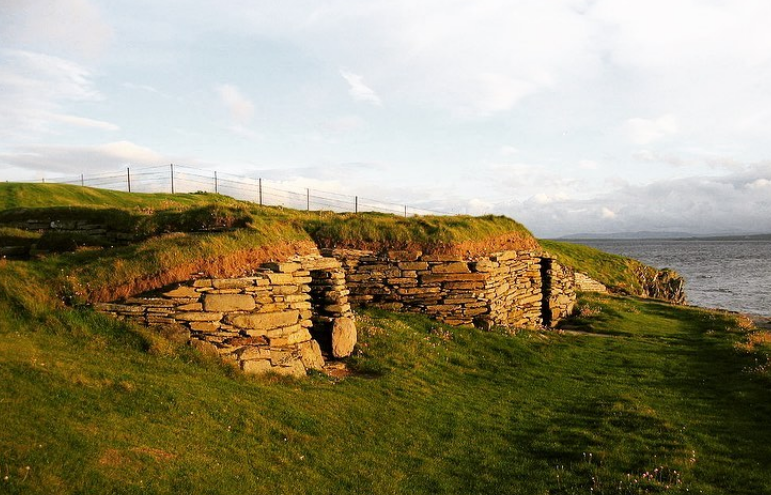 The oldest preserved house in Scotland (and indeed in all the United Kingdom) is on Scotland’s Orkney Islands. The house is an ancient Neolithic farmstead called Knap of Howar, which was occupied before the pyramids of Giza. The Knap of Howar seems to have been occupied from 3700 BC to 2800 BC – making it about a thousand years older than the pyramids. At around 5,000 years old, it is somewhere around the age of England’s famous Stonehenge. The ancient Neolithic farmstead is made up of two adjacent rounded rectangular thick-walled stone buildings. To get in, one would need to duck to get through the very low doorways facing the sea. They were constructed on an older midden, and the surrounding midden material has helped to protect the structures. Studies of the middens have indicated that the inhabitants kept sheep, pigs, and cattle while they cultivated barley and wheat and fished and gathered shellfish. The Neolithic farmsteads did not have windows. Instead, they had a hole in the roof so that the smoke of the internal fire could be let out. Visitors can still see the prehistoric stone furniture that helps give a vivid impression of what life would have been like in the homes long ago. The stone hearth, partition screens, beds, and cupboards are preserved. Thousands of years ago, they would have been further inland than they are today.

You can read the original article at www.thetravel.com