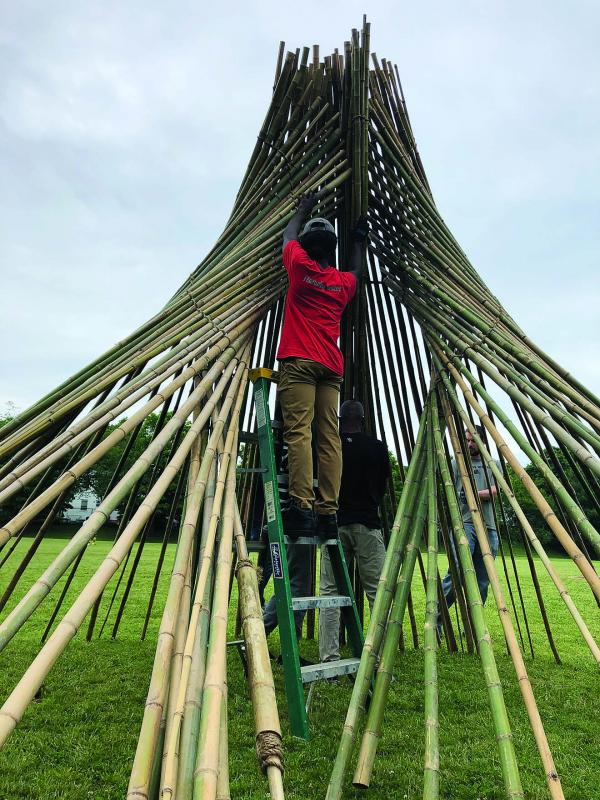 A pair of new bamboo structures have appeared in a Park in the Dorchester neighborhood in Boston, MA. The 14-foot tall bamboo teepee-like structures were installed by alumni from Wentworth Institute of Technology (WIT) who learned about bamboo construction and architecture through Bamboo Bali Studio, a WIT independent study program set in Bali.

In recent years, Wentworth professor Robert Cowherd has led students in an independent study program at Green School Bali, forging a collaboration with the school’s bamboo design-build program that has since graduated over 200 Master Builders, including 32 Wentworth Architecture students. In a press release, Cowherd provided some background on the history of bamboo construction as an important cultural legacy in Indonesia:

“During the 18th and 19th centuries, Dutch colonial officials banned bamboo buildings throughout the Southeast Asian archipelago as ‘unsanitary.’ Today a dedicated network of self-proclaimed ‘Bamboo Revolutionaries’ in Indonesia, the fourth most populous country in the world, is working to create bamboo forest economies as an alternative to short-sighted extractive projects driving climate change.”

You can read the original article at www.dotnews.com