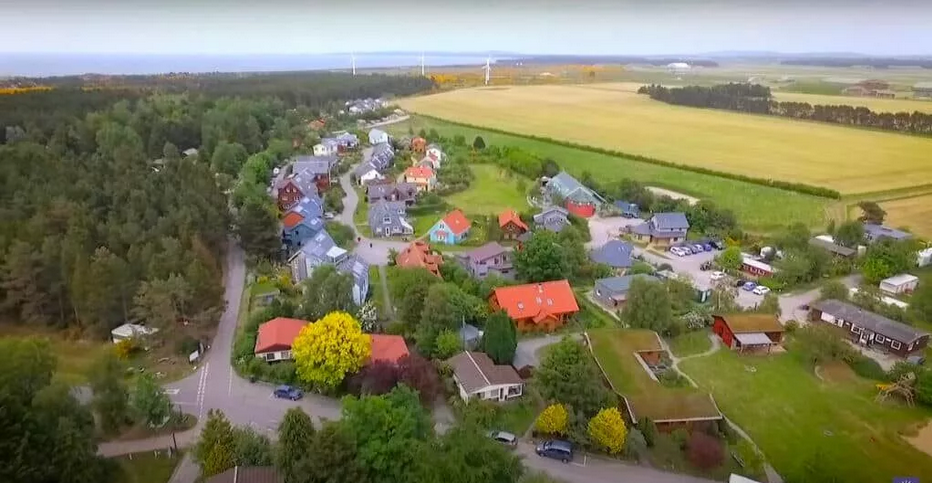 Ecovillages are intentional communities designed to be environmentally, socially, and/or economically sustainable. The concept gained popularity in the 1960s and 70s, although many traditional, rural communities have long engaged in these practices.

All of these communities share a few common elements, such as locally grown and managed food sources, renewable energy and waste treatment systems on the property, shared spaces and resources, community gatherings, or shared businesses. Some ecovillages also run educational programs for residents and visitors. An awareness of their environmental impact and social responsibility are usually key components, as is the contribution of all community members to maintaining their village.

Below are some examples of well-established ecovillages.

What started as 300 like-minded individuals in San Francisco led by Stephen Gaskin has become one of the oldest ecovillages in the United States. Founded on principles of nonviolence, vegetarianism, and respect for the planet, The Farm in Tennessee is now home to 200 residents and 20 Farm-run businesses.

Farming, composting, and alternative energy production are important parts of the village, as is spirituality, although the group follows no specific doctrine. Their members place great importance on community-building, and are bound by the desire to make positive change in the world by working collectively and peacefully.

The Farm also runs a well-recognized midwifery center with workshops, an international development and relief nonprofit, a K-12 school, a book publishing company, and the Swan Conservation Trust to protect nearby lands, among other projects and initiatives. In 1994, they opened the Ecovillage Training Center, which teaches students about permaculture, green building, renewable energy, and other important tenets of eco-living. You can watch a video about The Farm at www.youtube.com

When Crystal Waters Eco Village in Australia was founded in 1984, it was the world’s first permaculture village. Their 250 residents now enjoy 640 acres of bushland, which is classified as “Land for Wildlife” and is abundant with birds, kangaroos, frogs, and wallabies. 20% of the land is occupied by the residents, and 80% is available to be licensed by them for agriculture, forestry, recreation, and habitat projects.

The Village was founded on the principles of clean air, water, and soil, the freedom of spiritual belief, and meaningful social interaction among their members. The community was also formed based around the values of permaculture and members work with rather than against nature when building settlements and farming the land. These permaculture concepts also influence their forestry and water management practices, as well as their way of life.

The homes at Crystal Waters are clustered together in smaller groups to foster a greater sense of community and connection while living a rural lifestyle, and the Village Green provides space for their monthly markets and musical performances. They also run a permaculture course that teaches participants technical skills and the theory behind permaculture.

You can view a 90-minute documentary film about Crystal Waters on their website.

Located only two miles from downtown Ithaca, New York, EcoVillage sees itself as “part of a global movement of people seeking to create positive solutions to the social, environmental and economic crises our planet faces” — and they’re succeeding. The ecological footprint of EcoVillage residents averages about 70% lower than the typical American.

Three neighborhoods in the village — named Frog, Song, and Tree — contain 100 homes for more than 200 multi-generational residents, but 80% of their 175 acres is to remain open space indefinitely. Their green buildings use passive solar design for natural heating and cooling, and some have photovoltaic panels for solar power. Additionally, homes in the Tree neighborhood follow Passive House design methods, and their homes are air-tight so that no heating/cooling energy is wasted.

EcoVillage embraces a co-housing model of community-oriented living: cars are parked outside the neighborhood, paths connect the homes, and communal spaces are used for community meals, play areas, and classes. Three organic farms on site provide fruits and vegetables to the village, and many residents grow things in their own plots or one of the community gardens housed in each of the three neighborhoods.

You can watch a video about EcoVillage at www.youtube.com

First established in the 1980s in Moray, Scotland, Findhorn EcoVillage is now the largest single intentional community in the UK, and has been influential since the beginning of the ecovillage movement. Its founders were even involved in establishing the Global Ecovillage Network.

The Findhorn Foundation is housed at their main facility, The Park, in Findhorn Bay, and maintains three other sites as well: a nearby former Victorian hotel called Cluny Hill, a small community on the Isle of Erraid, and a retreat center on the Isle of Iona.

The “living laboratory” EcoVillage — which received the Best Practice designation from the United Nations Centre for Human Settlements — thrives on place-based and low-carbon practices, and seeks to demonstrate the connections between the social, spiritual, economic, and ecological aspects of life. The village has one of the lowest ecological footprints of any community in the developed world, and half the UK average. It’s been used as a model of a “20-minute neighborhood,” where all necessities are within a twenty-minute walk, thereby reducing dependency on cars.

At COP26, Findhorn Ecovillage announced their plan to become carbon neutral by 2030, focusing more on offsetting the travel-related carbon emissions from their many visitors and offering more online alternatives to in-person programs.

Findhorn has been a valuable resource for nearby schools and visitors, offering permaculture design certificate courses, foraging classes, and online seminars, as well as on-site retreats and events.

There is a short video at www.youtube.com

On the Peruvian Pacific coast, eighteen iconic conical stone buildings house Eco Truly Park’s  artistic, self-sustainable, and spiritual community. Its members follow Indian Vaishnava-inspired ideals of healthy living, yoga, and leading a simple and thoughtful life. They believe that caring for the land is an important part of daily health, and through their Agro Awareness project have transformed the sandy soil into a productive organic farm. Vegetarian food makes up their daily diet, and the community emphasizes the impact food has on both our bodies and the environment.

Eco Truly Park is also home to The School of Conscious Art, which has a gallery and a workshop. They welcome visitors to their compound to enjoy vegetarian food, tours, workshops, and yoga classes. The community is known as an important tourist destination by the government, and more than 75,000 visitors have come since it was created. Eco Truly Park hosts a volunteer program where participants learn organic farming techniques, art, and take yoga and philosophy classes that teach their principles of non-violence and respect for nature.

You can watch a short video about Eco Truly Park at www.youtube.com

You can read the original article at www.ecowatch.com