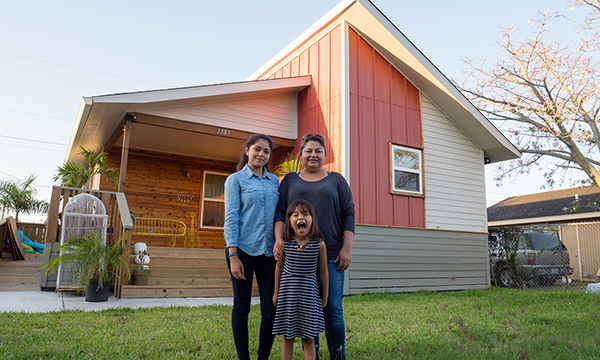 The core of the houses are built with pre-fab panels designed so the home can be finished in a week with only four workers.

The RAPIDO program was originally conceived in response to the snail’s pace of rebuilding efforts for low-income residents after Hurricane Rita hit Houston in 2005. “We were appalled by the initial nine-month delay—which in retrospect was actually lightning fast compared to Hurricanes Ike, Dolly, and Harvey,” says John Henneberger, executive director of the Texas Low Income Housing Information Service (TLIHIS).

After Rita, TLIHIS spearheaded a housing design competition. The winning temporary-to-permanent modular design came from Dallas-based BC Workshop, a nonprofit architectural firm. After Dolly, BC Workshop opened a Brownsville office and began working with the CDCB to turn the concept into action.

“Our goal with RAPIDO was to do it fast and cheaply, but also for the house to reflect who the family is, rather than ‘this is just a disaster recovery project,’” says Elaine Morales, the architect with BC Workshop who designed the homes.

The 432-square-foot core of the RAPIDO homes uses pre-fab panels designed so the home can be finished in a week without heavy machinery and by a team of two framers, an electrician, and a plumber.

Before and during the core construction process, clients meet with the architect to make choices about floor plans and design details. “What was interesting was that people didn’t complain that the core was small,” Morales says. “What they really wanted was to stay on their lot, for their kids to be close to their school, and to have the same commute to work. They were more concerned about the design of the permanent part of the concept.”

The new Mi Casita program will explore how to apply the RAPIDO incremental building model more broadly in communities such as Brownsville, where thousands of low-income homeowners living in dilapidated housing can’t qualify for conventional mortgages.

20 such homes—including the extra bedrooms—were completed through the RAPIDO program, each in under six weeks and for about half the cost of federal replacement houses. The CDCB envisions building hundreds of these temporary-to-permanent houses after disasters, extending limited recovery funds to more residents while getting them into finished homes in weeks rather than years.

Read the complete article at Yes! Magazine
Thanks to Rosana for this tip.