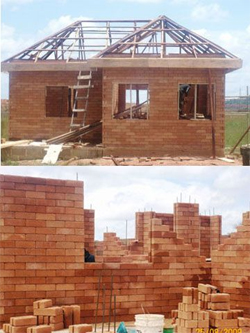 “Habitech Center is a research and development center for building components and building technology at the School of Engineering and Technology (SET) of Asian Institute of Technology, Pathumthani (AIT), Thailand.

Established in 1988, Habitech Center has been involved with the research and development of various building components, which are environmental friendly, energy-efficient and cost-effective. It has developed a cost-effective building system named Habitech Building System. This system has been tested, demonstrated and disseminated through various housing projects in Thailand and in other countries of Asia and other parts of the world.

Habitech Center has been actively participating in various housing projects through cooperation and partnership with individuals.
In year 1992, Habitech Center was chosen as a Reference Center of Development of Construction enterprises producing Local Building Materials (DECO), an inter-regional project of the International Labour Organization (ILO) for Asia and Africa, for the promotion and the development of enterprises producing MCR tile technology in Thailand and neighboring countries such as: Laos, Cambodia and Vietnam.”

Owen: The following reply was sent to someone who’s interested in making interlocking blocks with stone dust, which is more readily available in their area than clayey soil. These interlocking blocks are often called compressed earth blocks or CEBs for short. One option includes mixing stone dust with magnesium cement or, if you can find it in your area, geopolymer cement. Another idea is to add a vibrating plate to a CEB machine to speed production. And be sure to buy a machine that makes uniform height blocks. Irregular height blocks is the biggest flaw in CEBs that I’ve seen.

There are tens of thousands of buildings in Thailand and surrounding countries, plus countless privacy walls, etc. built with Habitech technology. There are cottage scale companies in every town and city and many villages that make CEBs. The king of Thailand has helped support this technology for close to 40 years. This why the CEB machines in Thailand are so good.

Instead of trying to communicate with Thai companies (very slow and awkward since their English skill is often low) I suggest either: 1. contacting Habitech directly, 2. hiring a translator or 3. working through the Asian Institute of Technology that most likely has a professor who specializes in interlocking blocks and can answer your questions. AIT by the way is a world class institute with English language instruction.