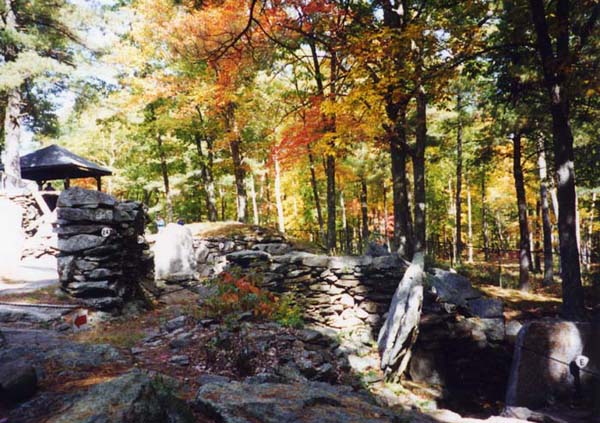 America’s Stonehenge is an archaeological site consisting of a number of large rocks and stone structures in New Hampshire.

Park sign:
“Located near the summit of Mystery Hill is a massive complex of stone chambers, walls and large standing stones, both radio-carbon dating (C-14) and the placement of the astrologically oriented standing stones indicate this site was constructed at least 4,000 years ago. Like the Stonehenge of England, America’s Stonehenge accurately plots many solar and lunar events, such as soltices and equinoxes, as well as many ancient holidays.”

From Wiki:
“America’s Stonehenge is an archaeological site consisting of a number of large rocks and stone structures scattered around roughly 30 acres (120,000 m2) within the town of Salem, New Hampshire in the northeast United States.

Carbon dating of charcoal pits at the site provided dates from 2000 BC to 173 BC, when the area was populated by ancestors of current Native Americans. In archaeological chronology, this places indigenous use of the site into either the Late Archaic or the Early Woodland time periods.

In 1982, David Stewart-Smith, director of restoration at Mystery Hill, conducted an excavation of a megalith found in situ in a stone quarry to the north of the main site. His research team, under the supervision of the New Hampshire state archaeologist, excavated the quarry site, discovering hundreds of chips and flakes from the stone. Both the state archaeologist and Dr. Stewart-Smith concurred that this was evidence of indigenous tool manufacture, consistent with Native American lithic techniques, although no date could be ascertained.”