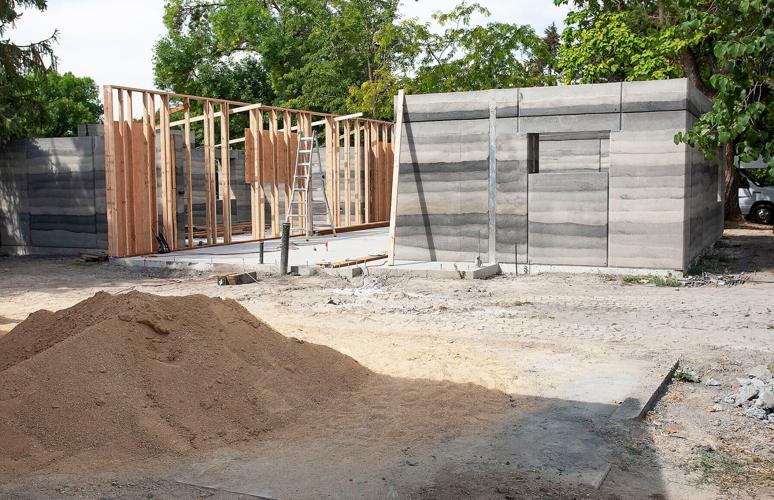 “Since the city wasn’t familiar with rammed earth, because this is the first one, it took me a while to get all the permits and get the engineering done,” Jinkins said.

Rammed earth walls are constructed by ramming a mixture of gravel, sand, silt and clay, with a small amount of cement — typically 5–10% — to make the walls more stabilized. Often, people will add certain dyes to their mix to give the walls different colors. The result is a unique appearance featuring layered ribboning. Historically, rammed earth walls are made with the materials found at the site, but Jinkins had to source his building materials from a local supply yard due to today’s building codes and standards. His mix is made up of 70% sand, 22% small gravel chip rock and 8% Portland cement. He also has rebar running throughout the walls.

Jinkins currently lives in a more traditional-style home that he also built. When he was smokejumping, he used to get laid off in the winters because there weren’t any wildfires, so he took up building in his spare time and has enjoyed the learning process. His first home took him four winters to build. He said two things drew him to trying rammed earth this time around: its longevity and energy efficiency. “I really liked that concept of a house that would last for centuries,” Jinkins said. Because of the home’s durability, he sees it as a more sustainable alternative to typical frame houses. His rammed earth walls are also hydrophobic, which adds to their durability.

According to Dr. Jillian Moroney, an assistant professor of urban studies and community development at Boise State University, “The thick walls make them very thermally efficient, so less heating and cooling is needed. I think they are well suited to desert environments also because we have less rainfall that could potentially damage the structure.” But Boise also gets cold in the winter, so Jinkins has added insulation to the walls to help with that. He said once the structure has been heated by his radiant heat flooring or cooled by his central air conditioning, it should be able to hold that temperature for hours or sometimes even days at a time.

While he knows rammed earth homes aren’t for everyone, Jinkins wants people who are interested to not be deterred by difficulties in finding someone to do it or by the potentially large upfront cost.

You can read the original article at www.idahostatejournal.com