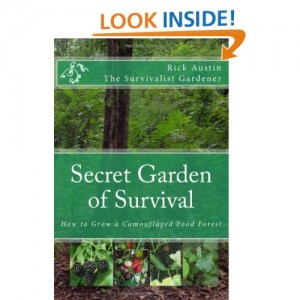 “Imagine a food garden that you only have to plant once in your life-time, that takes up very little space, that will provide food for the next 30 years; that can grow five times more food per square foot than traditional or commercial gardening; and where you never have to weed, never have to use fertilizers and never have to use pesticide– ever. All disguised as overgrown underbrush, so nobody knows you have food growing there! This book will show you how to do it in one growing season!”

From Mother Earth News:
“Rick Austin has not planted a garden in years, yet he plops 3 to 6 gallons of fresh-picked fruit and vegetables every day onto the kitchen counter for preparing or storing.

Often, Austin’s gathering binges prompt his wife to say, “Stop! I can’t keep up with you,” as she readies the harvest for dehydrating, canning or eating.

Outside their Appalachian off-grid home in North Carolina, the Austin’s carved out a completely natural, perpetual garden spot from the mature oak and pine forest. With the help of a hired bulldozer, in one afternoon they cleared a half acre right down to rock and red clay – the kind that turns to brick in hot, dry weather.

The Austins sold the hardwood, milled the pine for building materials and used the brush and rotted logs to construct berms for hillside terraces. Then, after all available soil was pushed into place, they began planting.

No straight, even, meticulously groomed rows of beans, corn and onions designate the area as a garden plot, however. In fact, whether from a distance or nearly atop the vegetation, it is almost impossible to realize a garden exists there at all.”

Read more at the source: Mother Earth News
Secret Garden of Survival on Amazon
Facebook
Secret Garden of Survival.com
From the book preview (reworded for brevity): This gardening method is based on studies of native indigenous people around the world who lived for generations without modern conveniences. These hunter/gatherers spent the majority of their time harvesting food without all the work that you would typically think of without traditional gardening.