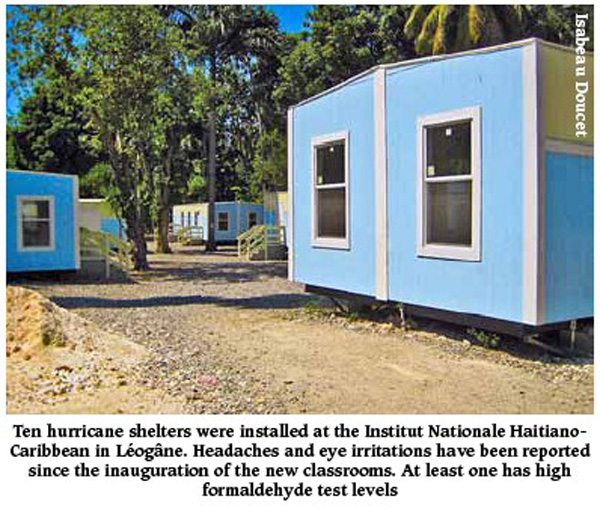 Where did the billions of dollars in donations to Haiti go? A big portion went to enrich the few who were overseeing the aid program.
“Structurally unsafe and laced with formaldehyde, the “hurricane-proof” classroom trailers installed by the Clinton Foundation in Haiti came from the same company being sued for sickening Hurricane Katrina victims.

By Isabel Macdonald and Isabeau Doucet
The project was announced by Clinton as his foundation’s first contribution to the Interim Haiti Recovery Commission, which the former president co-chairs. The foundation described the project as “hurricane-proof…emergency shelters that can also serve as schools…to ensure the safety of vulnerable populations in high risk areas during the hurricane season,” while also providing Haitian schoolchildren “a decent place to learn” and creating local jobs. The facilities, according to the foundation, would be equipped with power generators, restrooms, water and sanitary storage. They became one of the IHRC’s first projects.

However, when Nation reporters visited the “hurricane-proof” shelters in June, six to eight months after they’d been installed, we found them to consist of twenty imported prefab trailers beset by a host of problems, from mold to sweltering heat to shoddy construction. Most disturbing, they were manufactured by the same company, Clayton Homes, that is being sued in the United States for providing the Federal Emergency Management Agency (FEMA) with formaldehyde-laced trailers in the wake of Hurricane Katrina. Air samples collected from twelve Haiti trailers detected worrying levels of this carcinogen in one, according to laboratory results obtained as part of a joint investigation by The Nation and The Nation Institute’s Investigative Fund. 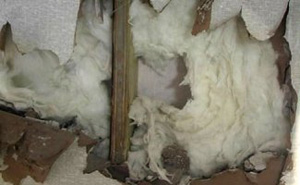 Hole in wall of Clinton shelter in Haiti.

By mid-June, two of the four schools where the Clinton Foundation classrooms were installed had prematurely ended classes for the summer because the temperature in the trailers frequently exceeded 100 degrees, and one had yet to open for lack of water and sanitation facilities.

As Judith Seide, a student in Lubert’s sixth-grade class, explained to The Nation, she and her classmates regularly suffer from painful headaches in their new Clinton Foundation classroom. Every day, she said, her “head hurts and I feel it spinning and have to stop moving, otherwise I’d fall.” Her vision goes dark, as is the case with her classmate Judel, who sometimes can’t open his eyes because, said Seide, “he’s allergic to the heat.” Their teacher regularly relocates the class outside into the shade of the trailer because the swelter inside is insufferable.

Lab tests conducted as part of our investigation in Haiti discovered levels of the carcinogen in the sixth-grade Clinton Foundation classroom in Léogâne at 250 parts per billion—two and a half times the level at which the CDC warned FEMA trailer residents that sensitive people, such as children, could face adverse health effects. Assay Technologies, the accredited lab that analyzed the air tests, identifies 100 parts per billion and more as the level at which “65–80 percent of the population will most likely exhibit some adverse health symptoms…when exposed continually over extended periods of time.” “You should get those kids outta there,” Maddalena said.

In the proposal approved by the IHRC, the Clinton Foundation said that “up to 300 local workers would be employed to build the schools.” Cinéas said there were only five to eight people hired by his firm on a very temporary basis, and the foundation declined to comment on what additional jobs were created.”

Read the rest of the article for free at The Nation Magazine. The article goes on to talk about the $1 million sweetheart no bid deal given to Clayton Homes that built the formaldehyde filled trailers for Hurricane Katrina victims, the leaky roofs and doors, windows without storm shutters, the lack of toilets and more.

What do I think will happen to these shelters? They’ll probably rot and blow to pieces in windstorms within a few years. What a shame. This news is sickening. Far safer and lower cost alternatives were provided by numerous groups. Patti Stouter and I designed ultra low cost earthbag shelters for Haiti and provided the plans for free. There were other similar earthbag projects popping up across Haiti after the earthquake due to the low cost and excellent earthquake and hurricane resistance. I know of one NGO that was prepared to build hundreds or thousands of earthbag shelters, but they basically got shut out of the process by USAID and the corrupt Haitian government. The same thing (insider deals given preferentially to friends and donors) happened over and over on many other projects. Haiti now has very little to show for the billions of dollars that were donated to rebuild their country.

This article says the mayor plans to remove the Clinton trailers to make way for stronger school buildings.