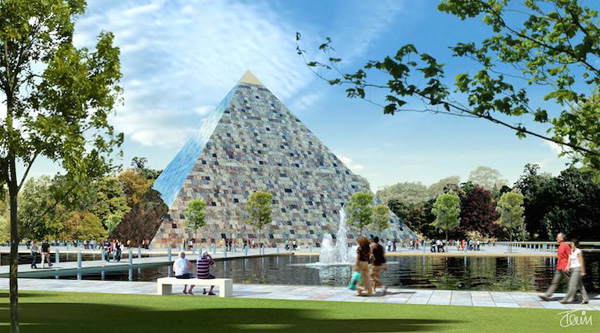 The Earth Pyramid will be the world’s largest time capsule

“What is the Earth Pyramid?
The Earth Pyramid will be the world’s largest time capsule giving the world the chance to take part in a historic project that will echo through the ages.

What is its purpose?
The purpose of the Earth Pyramid is to create a platform that will connect a generation of the world’s children through a shared experience and get them thinking about the future of our planet.

What will be put inside?
The chambers within the Earth Pyramid will hold contributions in a variety of ways. From information being preserved in a digital medium that will last for 1,000 years to acid-free paper and pencil. Some artifacts will be included but the main aim of the Earth Pyramid is to capture our thoughts.

What will the pyramid be made of?
The exterior of the Earth Pyramid will be made of stone from all over the world. Granites, marbles, sandstones and many other types will be used. This is what gives the structure its patchwork look that you can see in the images above. As this is a modern pyramid we feel it’s important to have modern materials on show in the finished structure and so the metal, glass, polymer, will also be visible. These materials will weather and age in different ways over the next 1,000 years, which will give visitors to the site an insight into how the materials change over time.

The base layer of facing blocks will be sourced from many countries and overseas territories around the world. Symbolically the foundation of the pyramid will be supported by the world.

The core of the structure will be made of blocks cast from eco-friendly geopolymer concretes to try and reduce the carbon footprint of the structure. We aim to push the boundaries of modern and ancient technology with this build.

The top pyramidion will be cast from brass. This brass will be made up from old bullet shell casings that have been gathered from conflicts around the world. This idea came from a student at a Peace Jam event and their exact words were “It will be a great way to turn something negative into something positive”.

The construction process is expected to take between 4 and 5 years. When construction is complete, the time capsules will be stored in the chambers and the pyramidion will be placed on top, sealing the pyramid.

Jean-Pierre Houdin is a French architect who, after being inspired by his late father, developed a theory of how the Great Pyramid at Giza was constructed. His theory will form the basis of the construction process.”