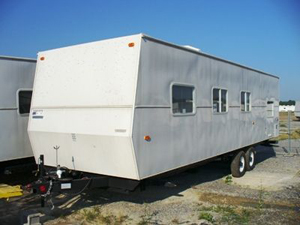 Your tax dollars hard at work. Agency spent more on trailers than it would have cost to buy new houses.

Comments from yesterday’s blog post prompted me to look up the cost of FEMA trailers for Hurricane Katrina victims. We all know the government buys $600 toilet seats, but this report about FEMA trailers really shocked and disgusted me.

“A new report by government watchdogs obtained by NBC News estimates expenses for each FEMA trailer at the Port Bienville site could reach a staggering $229,000.

“I could have bought a brand-new trailer! Or a house even!” Guidroz says.

Investigators with the Government Accountability Office (GAO) say the trailers themselves cost only $14,000, but FEMA wasted big money by placing them at a small temporary site built from scratch with huge maintenance costs.

The GAO found that over a seven month period, FEMA made a total of $30 million in improper or fraudulent payments for trailer maintenance alone. The investigators also found examples of phony inspections, rigged bids, and excessive payments.”

Owen: Back to yesterday’s discussion about building things to last. Jay pointed out how sometimes it’s best to build low cost temporary structures, and then brought up how FEMA trailers are a terrible waste. He said straw bale emergency shelters would be a thousand times less expensive and better to live in than FEMA trailers. (See video here.)

Of course FEMA will never build straw bale emergency shelters. There’s no money to skim off the top. No way for insiders to profit. No pork. Related: I just heard about a photographer who was threatened with arrest for trying to photograph one of the shoddy FEMA camps in Louisiana. Guess they don’t want the negative publicity. So much for free speech.

Idea for the next disaster: Volunteers could build a straw bale shelter or earthbag shelter near the disaster area and let people decide where they’d rather live. The main challenge would be finding a place to build it. Build it nice enough — maybe splurge $1,000 or so above basic costs — and many people would choose one of these over the FEMA trailers (especially if they knew about the high risk of lung diseases and cancer from all the nasty chemicals in trailer houses). Can you imagine the massive embarrassment to FEMA? The headlines would read something like “Family chooses $1,000 straw bale shelter over $229,000 toxic FEMA trailers.”