A team of researchers from Switzerland and Germany has found that modeling the contraction of wood while drying can be used to create curved structures. Manufacturing complex, curve-shaped wooden objects often takes a lot of time and energy and produces a lot of waste. This is because machines are typically used to cut or grind off excess parts of the wood. The researchers have found a way to take advantage of wood’s natural ability to absorb and release moisture to make similar structures.

Wood absorbs moisture and then releases it, which can lead to warping. In the manufacturing process, this ability is considered to be a problem to be overcome. But the team in Switzerland thought it might also be an advantage if used in a certain way.

The researchers began with the idea that it should be possible to predict the way wood warps and by how much. To find out if that was the case, they created computer simulations that accounted for such factors as the type of wood and how much moisture it contained. They next reasoned that if they could get many pieces of wood to bend predictably using only their natural warping tendencies, they could use them to create desired shapes. They created computer models of wood planks made of different types of wood and ran them through simulated wet and dry periods. The researchers report that their models showed that it should be possible to create complex curved structures without resorting to machining. To that end, they designed a 14-meter structure they dubbed the Urbach Tower and then built it at a real site in Germany. 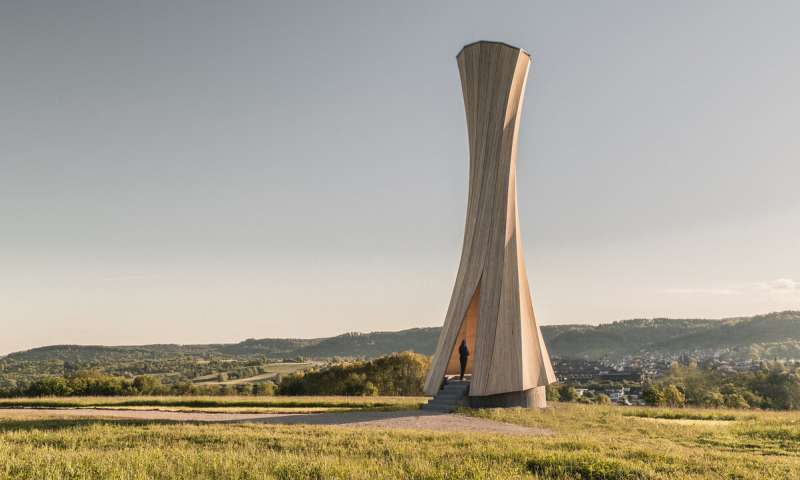 To create such curved structures, the researchers started with “wet” wood of different types—in this case, European beach and Norway spruce. A layered plank was made by gluing thin planks together. As the planks dried, one of the layers would shrink, while the other did not, forcing the entire plank to bend without cracking. After the desired shape was obtained, the wood would be bonded to prevent further change—and then combined with other planks that were bent in specific ways to build an entire structure.