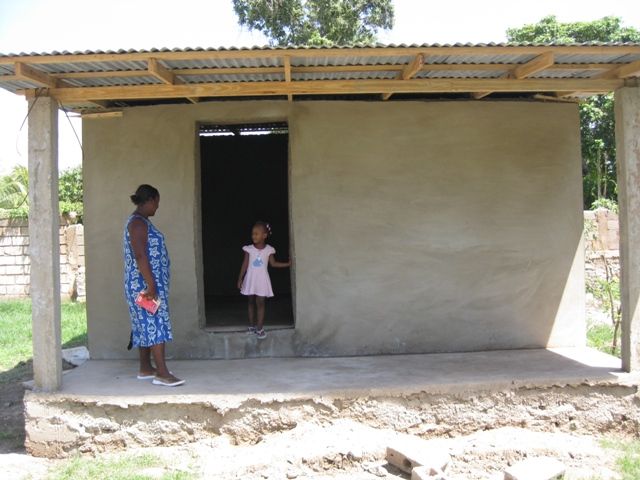 Former Uganda missionary, Mark Long,  joined with Haitian workers to construct the first earthbag house for the Haiti Christian Development Project during their brief summer evaluation trip, July 8-15, 2010. This demonstration home for Pierre Charles, long-time farm worker will be his first house. Since the completion of the house, admiring neighbors have become frequent visitors and are asking that they have one built.

Because of the great challenge of finding affordable, earth-quake resistant, and appropriate housing for Haitians, David Smith conducted an extensive internet search for weeks after the earthquake trying to get building ideas that would be acceptable to Haitian people. He rejected most of them for several reasons.

Mutual friends in California told David of Mark and his past work with building an earthbag dome house in Uganda. David became convinced that Mark would be the right man to lead the successful construction of their first earthbag house.

The mason foreman and his three workers were superb and completely  cooperative partners for this project.  Joining them in the long days in early July with the 115 degree heat index were farmer (tractor driver) Hervey Madden and senior Bible major, Andrew Riley. Mark detailed the process with brief narrative and excellent pictures.

This first house had to be raised about three feet with a rock wall which was filled with dirt. This and the addition of a concrete floor added to the costs. In spite of the high cost of building materials in Haiti, this very strong and functional house will cost between $2100-$2500. They were so impressed with it that they are asking that a dormitory (to house visitors and some refugees) using this type of “technology” be built. Depending on their assessment with its durability over time, several other relief houses may be built.

You can view details about exactly how this house was built from this excellent PDF document that they prepared.