In addition to the tree house and rocket stove projects already described, there were quite a few other hands-on demonstration projects happening at the Natural Building Colloquium (NBC), and I’ll describe a few of these. 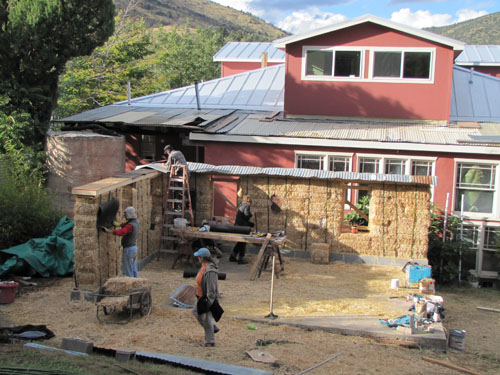 A simple straw bale wall was erected on a prepared concrete foundation; this was directed by Bill Steen with the assistance of Matts Myhrman and many others. This L-shaped wall would immediately serve as a kind of performance stage and could eventually be enclosed for a building. 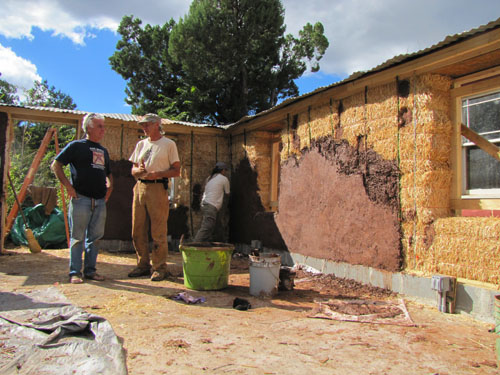 The same wall was used for demonstrating earthen plaster with Sasha Rabin. Jacob Rascusin and Ace McArleton also demonstrated how plaster can be used as an effective air barrier. 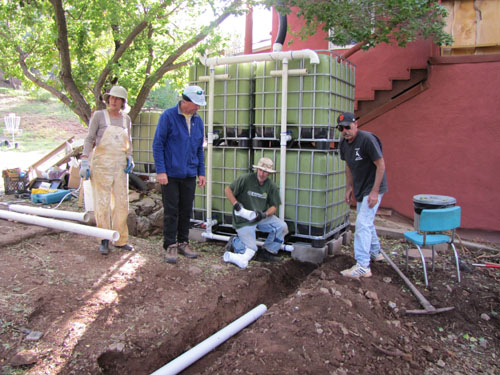 A rainwater harvesting system was installed under the direction of Asher Gelbart, using several large tanks connected together. It was actually put to use during the week of the Colloquium when we were blessed by about half an inch of rain. 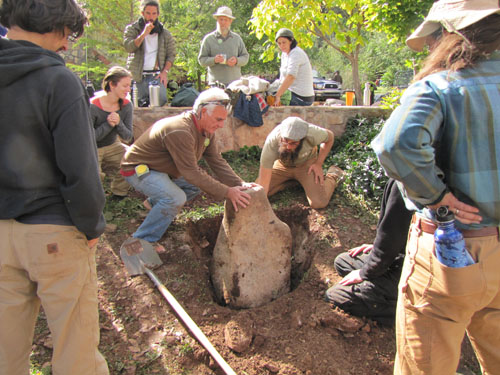 Steve Chappell of the Fox Maple School of Traditional Building demonstrated how to scribe a post to fit perfectly on a stone base, as might be done for a post and beam foundation. It took several people to wrestle this stone into an earthen socket. 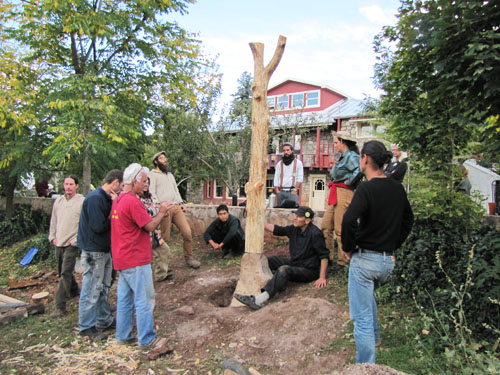 After several hour of careful measurement and carving to match the post to the stone, the post eventually stood perfectly erect without any other support. When I suggested that a steel pin could be used to make the monument a permanent attraction, Steve said that he was too much a purest to ever do that. 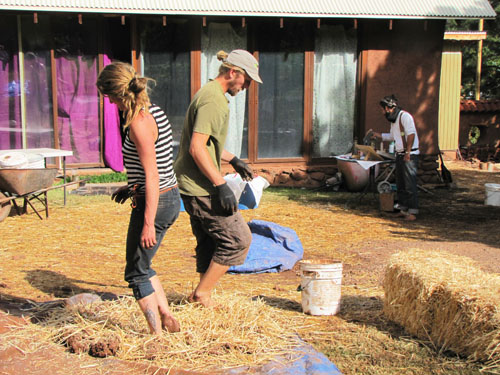 There were several projects that used cob, which is a mixture of clay, sand and straw. An effective way of mixing these ingredients together is to do the cob dance on a tarp, which is occasionally lifted to roll the mass and mix it further. 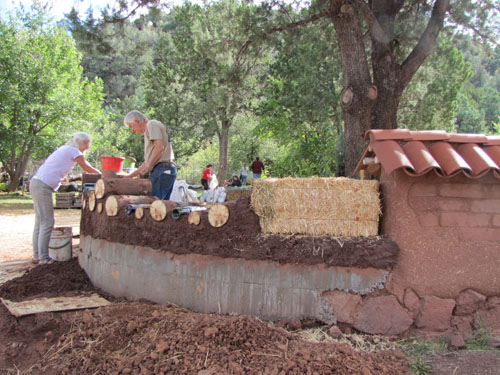 One of the recipients of the cob can be seen in this demonstration “cobwood” wall at the entrance of the Lodge. Rob and Jaki Roy, of the Earthwood Building School can be seen laying out the initial log ends. As a foundation for both the cordwood and straw bale is a preexisting poured concrete stem wall with one course of gravel-filled earthbags on top of it. I prepared the earthbags (with the help of a volunteer); Kaki Hunter and Doni Kiffmeyer demonstrated another earthbag retaining wall nearby. The little wall will eventually be topped by some terra cota tiles to protect it from the weather. 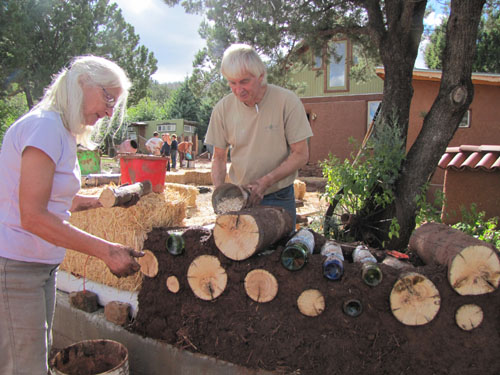 In the above photo Jaki is about to place a small log end in the wall, while Rob pours sawdust and lime insulation in the central void, as is traditionally done with insulated walls. You can also see several coupled bottle ends laid into the wall as part of the decoration. One night they demonstrated how a flashlight can be swept across the back of the wall, providing a mesmerizing light show on the opposite  side.

Besides the workshops described above, there were at least an equal number that I was unable to document; there were simply too many things going on to do it all!