Think about the people that you know and ask yourself how many of them fit into the “single family” model of chosen lifestyle. Perhaps you know an elderly person who doesn’t want the responsibility of maintaining a big home and would rather live with other folks in a similar situation. Maybe you know someone who doesn’t want to be married, but does want to live “in a relationship” with other people. How about a young person just starting out on her own, who is ready for some independence, but is not ready to take on homemaking on her own? What about a several generational family that wants to be close to each other, but not necessarily live in the same house?

In general, the zoning for developing residences across much of the United States is classified as “single family”; only one family may reside on any given lot. So what is a single family in the United States at the beginning of the 21 st Century?” The definition of what constitutes a family has gotten rather vague.

I feel that it would be much better to recognize and accept the great diversity of people around us, and actually provide homes for all of us, legally. This would mean making available small rental units, mother-in-law apartments, co-housing projects, cluster housing projects, multi-unit dwellings, along with the single family homes. Embrace the diversity!

This would not only be good for people, but it would also be good for our environment in that sharing facilities and leaving more open space is a more sustainable approach to living. Less redundancy means more efficiency in energy and materials used. 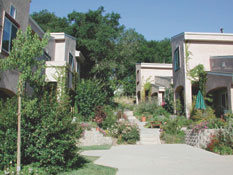 Co-housing is a particularly interesting concept, in that it provides for the needs of individuals or small family units, while at the same time giving them access to each other as a close-knit community. A typical co-housing project will have space for six or more living units which are private from each other, and then there will be common space to be shared. This shared space might include a large kitchen and dining hall, a recreation or meeting room, meditation or spiritual room, laundry facilities, and workshop or garage space. There are many forms that such a community could take, and this form is under the control of those who organize it. Usually members own their particular quarters, and have shared rights for the use of the common space.

Cluster housing is a little different, but has some similar attributes. Basically the idea is to cluster several houses within a relatively small area, leaving a substantially larger area undeveloped as open space. This gives the residents the opportunity to share their lives and facilities in some ways, like co-housing projects, while maintaining greater autonomy. This also affords the preservation of more open space than would happen with the same number of houses occupying lots in a conventional way.

Many folks express their concerns about allowing more than one “unit” on a lot. Some think increased traffic would be a problem; others feel that greater density would not pay for itself, in terms of maintaining the infrastructure. Someone might ask, “What about all of the lot owners who bought their lots knowing they were zoned for single families, and then years later discover an apartment next door?” I feel that these are all valid concerns that need to be addressed.

I think it is possible to have denser development without compromising open space. One approach to keeping density in check would be to require co-housing projects to acquire as much land as would be needed for a comparable number of single family units. Cluster housing typically creates more open space than would be left if the same land were developed as a series of single units. Likewise, there could be minimum lot sizes for allowing other forms of multi-unit development. Doing this would also equalize the potential for greater traffic.

How do you fit into our social equation? Why not make space for all of us to live to our fullest potential within housing arrangements that allow for the marvelous multiplicity of our personalities?

4 thoughts on “Housing Our Society”