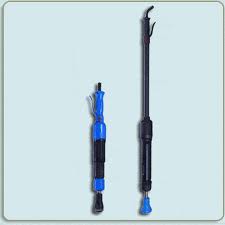 My focus has always been on low cost, low tech housing solutions. But people are starting to plan large earthbag projects, and it’s only natural to look for ways to reduce costs and labor. One option is to modify the pneumatic tampers used for rammed earth by adding a wider base. It would take some experimenting to determine the optimum size. Too large and you wouldn’t get adequate compaction. This would require a large air compressor, especially if you’re running two at once. It would be interesting to find out what brand David Easton (the top rammed earth expert) uses at Rammed Earth Works. Rammed earth is very similar to earthbag, as explained here. One of the main differences is expensive wooden forms aren’t needed because the earthbags contain the soil.

And if you’re going to use pneumatic tampers, you’ll probably want to speed up the rest of the process. A truck mounted auger could feed soil directly from a dump truck. (Use an earth auger, not a grain auger.) This doesn’t have to be complicated. One worker could hold the tube and bucket chute in the same way as if being filled by hand, while soil flowed from the auger. This wouldn’t be totally automated, but it would allow a human to control and fine tune the placement of the tubes. You’d want clearance around the entire building so the truck could drive on all sides. And if you purchased road base or something similar there wouldn’t be any mixing – you’d have an engineered mix that’s good to go. In many cases you wouldn’t even need to add water since road base is often delivered moist. Use mesh tubes on vertical walls (Hyperadobe) and you eliminate barbed wire and the pinning that’s associated with bags. Add rebar on both sides as prescribed by Precision Structural Engineering and you can meet code without building buttresses. And since Hyperadobe dries much faster than poly tubes, you can start spraying plaster much sooner.

The earth auger could look something like the Instee Levee Builder that can produce 400’ of 18” wall per hour. You’d want to go slower and produce nice straight walls.