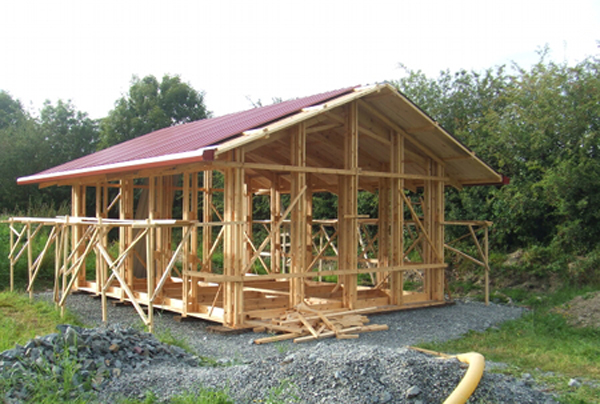 Peter Cowman – The Shelter Maker – teaches others how to build affordable housing.

“The structures that Cowman helps build are an extension of the humans who he helps to build them. As he says, each of us have boundaries, just like houses. But beyond the physical self, a home should also reflect the intuitions and dreams of its occupants: Cowman calls this invisible architecture. The design process, it is stressed, begins the moment we imagine our ideal; in other words, when we dream. Homes, he says, quoting Jung, are an extension of oneself and one’s desires. But in order to dream effectively, we must first get in touch with our own lives.

Cowman is unapologetically critical in his appraisal of contemporary architecture. Most Irish people, he says, are enslaved by the dominant economic philosophy of our time – the market economy. One of its crucibles is the idea that people should not be encouraged to build their own houses. Rather, it dictates that each individual should essentially auction their time, in the form of labour, to pay for space, as in rent, or a mortgage. Mortgaging, as Cowman notes, literally means “the wages of death.” By engaging in the mortgage system we tacitly agree to submit ourselves to work for the bulk of our time on earth, simply in order to occupy space.

Cowman links his life directly to his thought and method. This son of a carpenter lived a simple childhood in a carless 1950s suburban household. His father built an improvised structure in the back garden which would become a playspace, a study space and, later, an inspiration for Cowman’s “Econospace” method. After visits to America, he rejected conventional architecture in favour of a transient lifestyle. Later, returning to his discipline in the west of Ireland, Cowman was shocked to discover his extensive training had left him unprepared to actually build a home. Irish architects of the 1970s didn’t concern themselves with such things. Architecture was about “important buildings for important people and events.”

The substance of Cowman’s worldview would certainly be one of despair, if only his style was not so energetic, witty and infused with hope. His approach is not that of an architect, or indeed a builder, but a teacher…”

Read the rest of this well written article at Perpetual Cabbage.com