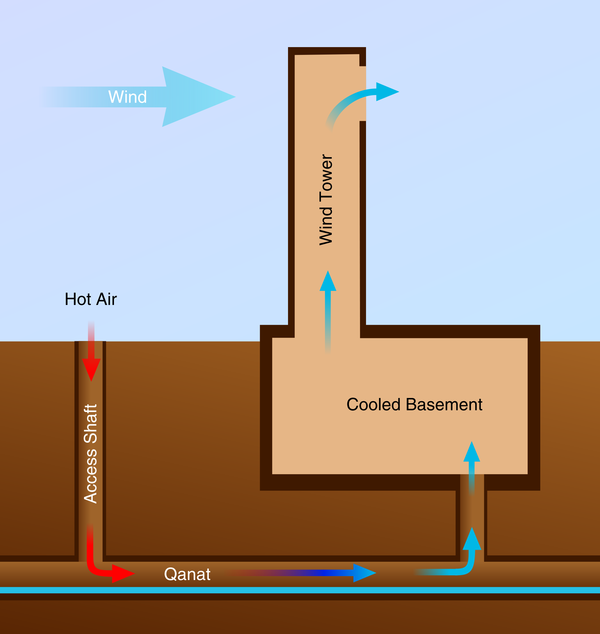 A windcatcher and qanat used for natural cooling

Many traditional water reservoirs (ab anbars) are built with windcatchers that are capable of storing water at near freezing temperatures during summer months. The evaporative cooling effect is strongest in the driest climates, such as on the Iranian plateau.

The construction of a windcatcher depends on the direction of airflow at that specific location: if the wind tends to blow from only one side, it is built with only one downwind opening. To keep buildings free of dust and sand blown in from the desert, windcatchers were built facing away from the wind.

One of the most common uses of the windcatcher is to cool the inside of the dwelling; it is often used in combination with courtyards and domes as an overall ventilation and heat-management strategy. It is essentially a tall, capped tower with one face open at the top. It does not necessarily cool the air itself, but rather relies on the rate of airflow to provide a cooling effect. Windcatchers have been employed in this manner for thousands of years, as detailed by contemporary Egyptian architect Hassan Fathy.

Windcatchers are also used in combination with a qanat, or underground canal. In this method, the open side of the tower faces away from the direction of the prevailing wind (the tower’s orientation can be adjusted by directional ports at the top). By keeping only this tower open, air is drawn upwards using the Coandă effect.

The pressure differential on one side of the building causes air to be drawn down into the passage on the other side. The hot air is brought down into the qanat tunnel and is cooled by coming into contact with the cool earth and cold water running through the qanat. The cooled air is drawn up through the windcatcher, again by the Coandă effect. On the whole, the cool air flows through the building, decreasing the structure’s overall temperature. The effect is magnified by the water vapour from the qanat.”