Few things give me more pleasure than living among green plants, especially when they are edible. If you couple this with the possibility of helping to heat your house, you can readily see why people become attached to their attached greenhouses. I have built several of them, with different materials and designs, but the basic concepts are really pretty simple.

It is best to design an attached greenhouse into the original house plan, but it is often quite feasible to retrofit one onto an existing house. You need some space on the south side of the house wide enough to accommodate a growing bed and space for access. The area should not be obstructed by trees or other things that would limit the available sun light. It could have an outside entrance, but it doesn’t have to. 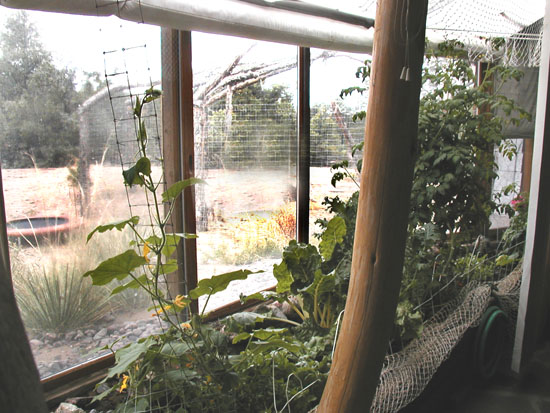 An essential element of a good growing space is plenty of translucent material to let in the natural light. This can be glass or plastic (such as Lexan). There are pros and cons of each. Glass is much more durable and clear, so you can see through it, but it is also more susceptible to fracture (a factor in choosing overhead material), and it does not pass on full-spectrum light. Plastics, on the other hand, can provide full-spectrum, diffused light (which most plants love) and they are more resilient to fracture, but they last only about 15 years at the most, and often you can’t see through them. The greenhouse shown in the photo employs some of both: the vertical portions are glass, and the roof section is Lexan. This works out well, since we can still see the view through the glass, but the plants get lots of diffused, full-spectrum light from above and we don’t have to worry about the possibility of falling glass.

My experience is that vertical glass alone is not sufficient to promote good plant growth; plants are happier with light from above. This can be accomplished either with overhead glazing, or with slanting glazing (see the photo of Paramananda’s greenhouse). Paramananda used glass and softens the light for the plants with a scrim material.

Any well designed solar greenhouse will have lots of thermal mass built into the design. This can be in the form of rocks or cement for the planter box itself, as well as the soil in the planter. Masonry floor materials can also contribute to this mass, and the wall materials can be chosen with this in mind. Some people include jugs or barrels of water in the greenhouse to store the heat. The idea is to store enough heat within the greenhouse, that you don’t have to provide auxiliary heat for the space.

Once you’ve captured all that heat in the greenhouse, you want to be able to keep it there over night, or during gray days. So portions of the structure that are not glazed and are exposed to the outside air should be well insulated. The glazing itself can also be insulated at night with thermal panels or curtains that are utilized at that time. We have both roll up curtains for the vertical glass, and insulating panels that fit into the overhead glazing. This pretty much assures that nothing will freeze, even in deep winter.

In order to utilize the extra heat that the greenhouse captures, you need a system of venting it into the rest of your house. This can be as simple as using operable doors or windows between the greenhouse and the other rooms, or providing high and low vents to accomplish the same thing. More elaborate methods involve heating ducts and fans to force the warm air where you want it. 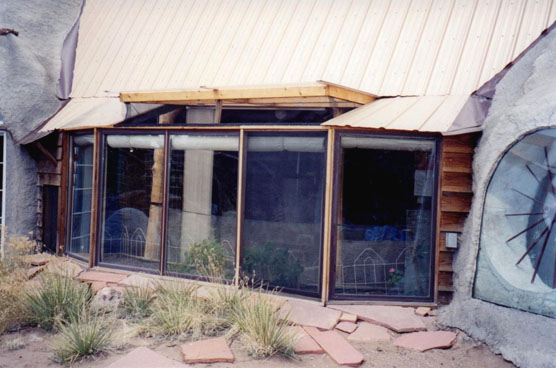 Now comes the question of dealing with too much heat. The space might be delightful in the winter, but a wretched furnace in the summer if proper ventilation is not provided. There are several strategies for managing the temperatures within an attached greenhouse. One is to vent the extra heat back into the atmosphere directly. This is what I have done. Several of the windows open to let in fresh air, and most of the roof section actually is hinged and can be lifted up to let the hot air pass right back out. Then we have shades that we draw across behind the planting beds to keep the heat and light from being too intense in the portions of the house beyond there. Generally, you want cooler air to be let in down low (preferably facing the prevailing winds), while the hot air is vented out up high at the opposite end of the space, where it naturally rises.

Another strategy for venting the greenhouse is employed by Paramananda. She designed and built her house in 1991. As a student of Permaculture design, Paramananda wanted her house to embody many of its concepts. As she says, “Every element of the design should serve many functions.” Thus her greenhouse is not only a commercial growing space, but it also almost completely heats her house. With two stories and about 2200 square feet of space, this is quite a tall order! She accomplishes this feat by cleverly hiding tons of rocks in the four-foot crawl space under the first floor. A thermostat at the top of her two story greenhouse automatically controls a drum fan that will force hot air through the basement of rocks, to emerge via warm air vents throughout the house. The rocks both store the heat for use when the sun is not shining and moderate the fluctuations in temperature. If the whole system gets overheated, she can open a vent into the garage and spill some of the excess heat. Colder air is allowed to return into the greenhouse via vents at the floor level of the second story, and through a screen door between the greenhouse and the first floor. We sat perfectly comfortably in her greenhouse for quite a while, on a very warm sunny day; I could feel a refreshing breeze on my skin. 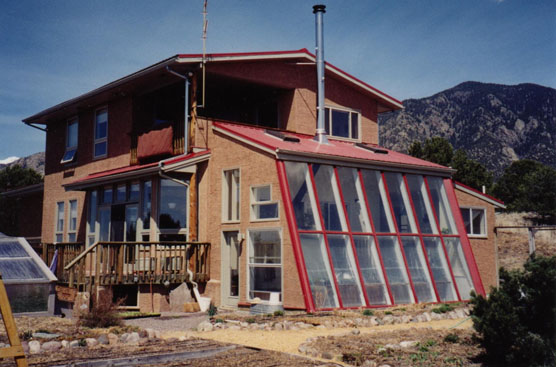 Paramananda’s greenhouse provides two other utilities (in keeping with her desire for multiple functions). Her clothes dryer vents directly into the space, thus providing needed humidity for the plants and allowing the heat to be recaptured by the circulating system. Also there is an enormous Russian stove in the space. These stoves are made with a huge amount of mass to store heat, and are amazingly efficient. Actually Paramananda says that this is one the few things she would change about her design, if she were to start again. In this climate where the weather fluctuates so rapidly, it is hard to know when to fire up her stove because it can have an effect some 24 hours after using it. She says a better choice for this climate would be a simple cast iron wood stove, that gives off heat much more immediately, and cools down more quickly. She typically only fires up the Russian stove about ten times a year.

While I was visiting Paramananda, I asked how she deals with the bane of all indoor gardeners: white flies and aphids. With white flies, she will vacuum up as many as possible, and then spray the affected plants with a mix of one teaspoon of liquid detergent in a pint of water. Also she makes little stakes that hold bright yellow cards (2″X4″) that are smeared with petroleum jelly. The white flies can’t resist landing on the yellow, and then they get stuck there. For aphids (and also white flies), her strategy is to spray them with “Bioneem”, made from the seeds of the Neem tree. This must be done every 7 days for five or six weeks, in order to interrupt their life cycle. Bioneem is available from Peaceful Valley Farm Supply (888-784-1722 or www.groworganic.com). Another remedy for these pests that I recently read about is to spay the affected plants with a fine mist of very hot water (about 140 degrees F.) for several seconds.

There are many books with specific designs for attached solar greenhouses and there are two plans shown at dreamgreenhomes.com. I encourage you to consider adding one to your house plans, or to your existing house. It will pay for itself many times over with food, heat and pleasure.

1 thought on “The Glory of an Attached Greenhouse”