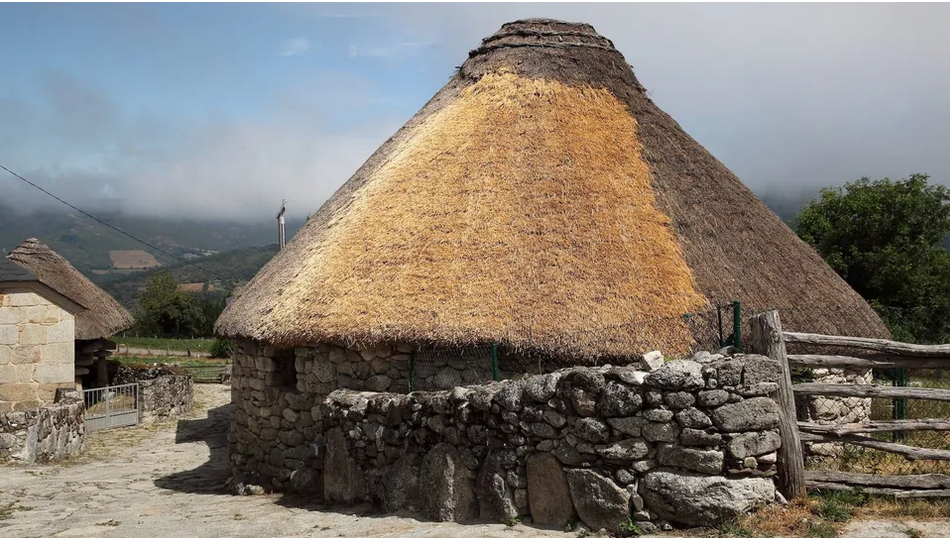 Deep in Ancares mountains of Spain are some centuries-old houses that look straight out of a fairy tale but are cleverly suited to the harsh realities of this remote region. Known as pallozas, the round huts are made of stone and topped with a teardrop-shaped roof of rye straw. There are more than 200 scattered among the rural villages. Many of these homes were built 250 years ago, though their architectural roots stretch back millennia – some historians contend that pallozas are pre-Roman, an evolution of Celtic and Iron Age construction. Pallozas are built from just a handful of materials: stone, wood and rye straw. However, despite their simplicity, they are perfectly adapted to the mountain region’s cold, windy conditions. For example, their round shape – with few windows or openings – lessens the impact of harsh mountain winds. And thick stone walls – made with granite, limestone or slate, depending on which was available in the area ­– insulate from the cold and conserve interior heat. Inside, the palloza’s fireplace and its indoor stable (for the family’s cattle) are essential for maintaining a constant temperature. Sitting next to the same fireplace that warmed four generations of his family, Jaime Fernández Uria explained how each palloza has two clearly distinguished areas inside: the ástrago, where people live; and the estravariza, the animal stable. He slept above the stable until he was 14, on a wooden platform warmed by the animals below it. “We used to have cows, pigs, chicken and a horse,” he said nostalgically.

Traditionally, the fireplace in the center was where the family came together to chat, eat and carry out tasks like preparing food, weaving wool or repairing tools. Food such as chestnuts, cheeses and meat were kept above the fire, where the rising smoke protected it from rodents. Next to the fire there may have also been an oven and a small pen for young animals that needed more warmth. A private bedroom built with wooden planks could be found on the other side, and it was reserved for the oldest married couple living in the house. “My mother was the last one to live here, until 1984.” said Fernández. For centuries, rye was the predominant cereal cultivated in the Ancares mountain valley, but over the past few decades, as the region’s population and rye crop have declined, palloza owners have struggled to keep the roof in good condition. “Every year we spend from 2,000 to 3,000 euros to repair the most damaged part of the roof. We do it ourselves, harvesting our own straw,” said Isolina Rodríguez López, owner of the Casa do Sesto Palloza Museum. She was the last of six generations to be born in this house, and she and her husband converted it into a museum in 1989. Some owners ended up installing a metal roof sheet; no one likes the solution, but it’s a more affordable choice.

For centuries, the palloza was the centre of a remote subsistence economy in which families produced everything they needed, with very little dependence on the outside world. Until the 1980s, the remote villages in this region didn’t even have electricity, water or paved roads. Villagers traveled in carriages pulled by animals. However, thanks to that unspoiled landscape, isolated location and complex biodiversity, the Ancares region was declared an Unesco Biosphere Reserve in 2006. The altitude here varies from 800m down in the valley to 1,670m in the Ancares Pass, creating a climate that sees a lot of rainfall, winter snow and moderate temperatures in the summer, although that is changing, like elsewhere in the world. “It is much hotter and snows much less than when I was a kid,” said Moreno, who is now in his late 70s.

Despite the tough climate and poor soil, residents traditionally raised cattle and pigs and grew vegetables such as potatoes, collard greens, onions and, in some areas, beans. Chestnuts were the most important harvested fruits, along with apples, and today there are still plenty of chestnut forests in the surrounding mountains.

Heritage Architecture is a BBC Travel series that explores the world’s most interesting and unusual buildings that define a place through aesthetic beauty and inventive ways of adapting to local environments.