Adaptive reuse fits the sustainability mantra of the “three Rs,” (reduce, reuse, recycle) but all too often we overlook the green side of architectural conservation. 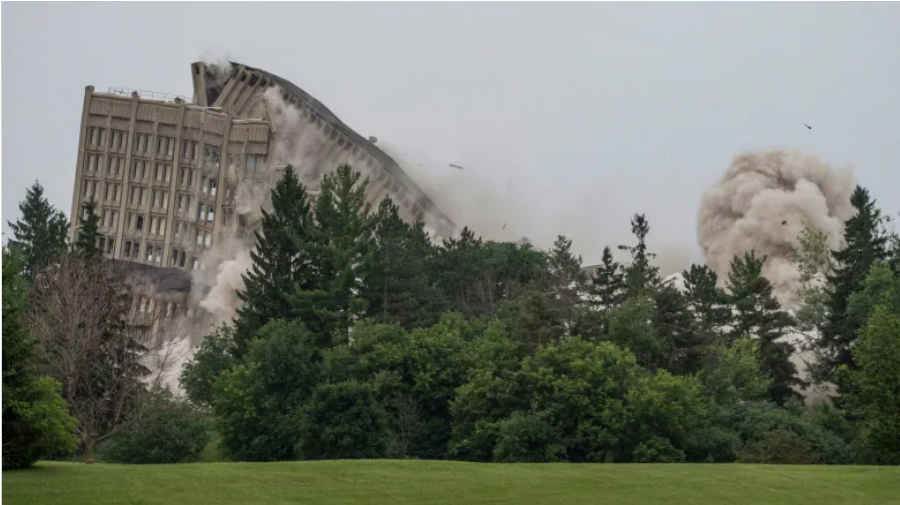 Whether it’s a Gothic Revival church, a modernist Centennial project, or a contemporary design in glass and steel, a completed structure has a huge carbon footprint. Demolishing an existing building, throwing it away in a landfill, is a staggering act of conspicuous consumption. And yet this destructive, extractive approach has become normalized over generations.

Reusing old buildings is an easy way to reduce our carbon footprint, but first, our thinking about development needs a reset. Our construction industry relies on a cycle of premature obsolescence, demolition, and redevelopment. Older buildings are often seen as a liability, while much new development still operates on a “take, make, waste” model — an extractive model for growth that’s the opposite of sustainable.

In the last 15 years, emissions increased the most from the extraction of non-metallic minerals associated with construction, such as sand, clay, and gravel. In fact, demand for concrete is so high that we are running out of sand. Add deforestation and throwing away millions of tons of wood waste, including old-growth lumber, and you have a colossal amount of waste.

Acknowledging the up-front emissions involved in construction lets us see existing buildings not as future trash, but as valuable stores of embodied carbon. Also known as embodied emissions or embodied energy, embodied carbon refers to the total energy expended — invested — in a building’s construction, from extraction of natural resources, manufacturing, and transportation, up to final completion of a new structure.

The greenest building is one that is already built. Heritage conservation is environmental conservation. They’re one and the same thing. The climate emergency demands that we undo the established, artificial division between natural and built environments for a more holistic view of conservation, heritage, and sustainability.

Since the Second World War, we’ve taken new development for granted as a sign of progress and prosperity. By the 20th century, architects had completely bought into a real estate process that had made obsolescence its rallying cry, not yet recognizing how unsustainable the cycle of destruction and construction can be. Architecture is a renewable resource. It’s time we stopped seeing it through the lens of planned obsolescence.

You can read the original article at www.cbc.ca