Over the weekend I had a chance to tour a genuine off-grid homestead that has a lot going on to interest readers. The genius behind what I will show you is Asher Gelbart, who makes his living as a rainwater harvesting technician and Permaculture specialist.

Just getting to his home was a bit of an adventure, as it is necessary to plunge through the Mimbres River and along a rough track for about a mile beyond the little town of Mimbres in Southern New Mexico. 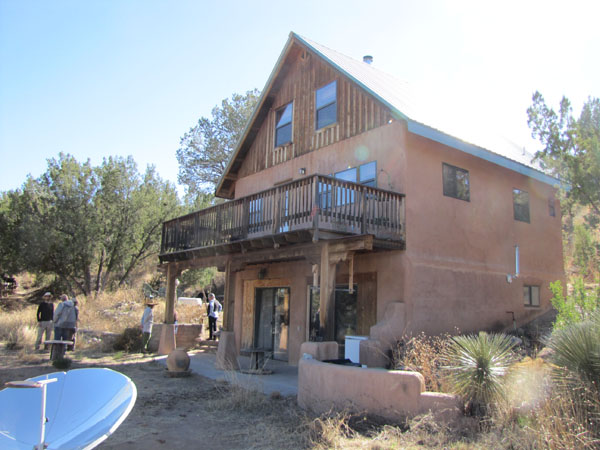 The house itself was not even part of the tour, as it is a fairly conventional home that Asher bought about a decade ago. It already had a 600 watt photovoltaic system installed with batteries for storage of the power when he bought the property, and he is still relying on this to produce all of the electricity that he uses. With this minimal system he is able to pump domestic water from a well below the house up to a large cistern on the hill above. The power also runs a small chest freezer that is set to refrigerator temperatures, which he claims is about ten times more efficient than a regular refrigerator with a vertical door because it doesn’t drain cool air when open. (You can read more about this, and other technology mentioned in this tour, at Asher’s website.) 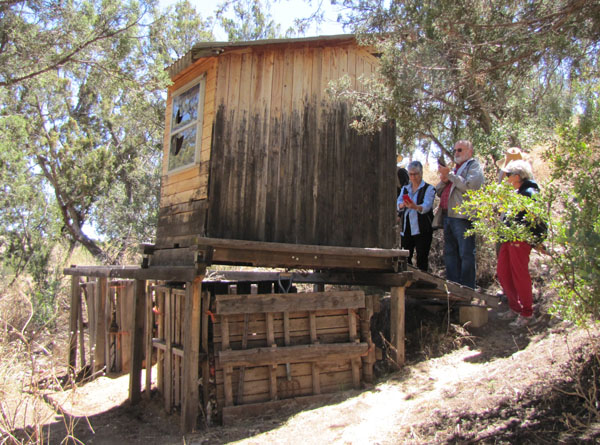 The first stop on our tour of the property was the compost toilet facility. Pictured is the outdoor privy, but there is also a simple humanure bucket arrangement that is used inside the house and emptied into the same compost piles beneath this privy. There are actually three large bins made from pallets situated beneath the outhouse. Asher has cleverly attached large castor wheels to the corners that allows him to simply push the outhouse along a wooden track over to the next bin when it is time move it, which happens about once every year. There is an active bin below the privy, a curing bin where the compost cures for a full year, and a central bin used to separate the two and provide storage for sawdust, etc.  There was no objectionable smell and it was all rather tidy. Asher periodically turns the compost to redistribute the pile that inevitably forms on top; it all stays aerobic through the addition of vegetable scraps and the open air nature of the bins. Asher also recommends this alternative barrel compost toilet system. 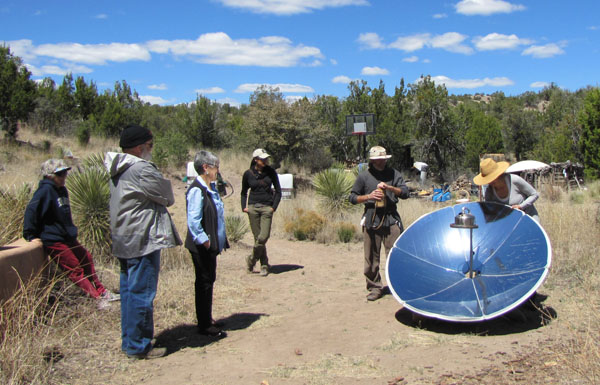 Next stop on the tour was the parabolic solar cooker that was busy boiling water on this sunny day. This was made from a kit that he purchased years ago. It takes careful adjustments rather frequently to focus the hot spot onto the cooking pot, but when you do the heat is intense, and it was demonstrated by his partner, Antonia, that it will actually catch grass on fire if placed in the beam. 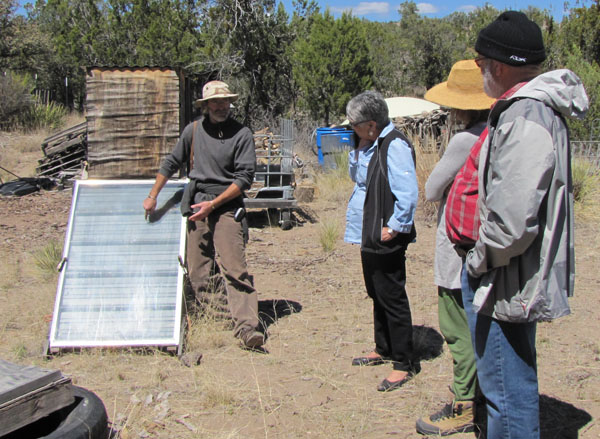 Here Asher is demonstrating a simple solar dehydrator that he made many years ago. The panel that he is pointing to provides hot air that is directed to the box behind it, which is where the dehydrating actually takes place. There are a series of trays that can hold all manner of items to dry, such as fruit, granola bars, herbs, etc.

I’ll continue with this tour in my next post, so keep tuned…