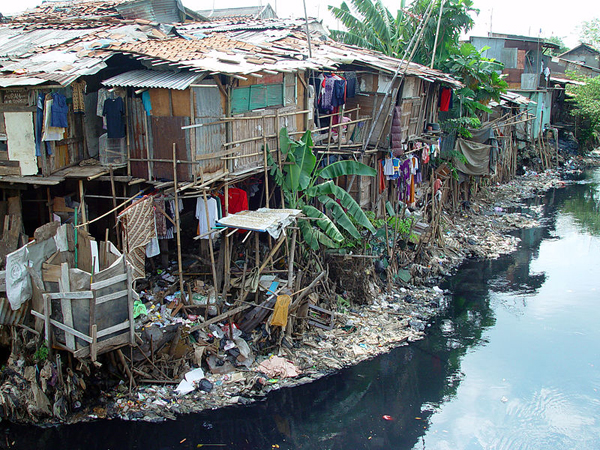 An example of urban poverty in this slum in Jakarta, Indonesia

Over a billion people in the world lack decent housing even though there are dozens of low cost housing methods that could eliminate this problem. Possibilities include building with earthbags, adobe, cob, pallets, bamboo and other locally available materials. These affordable, sustainable housing options are described on our blog in good detail. Additionally, the Internet has thousands of websites, blogs, online journals and forums with even more information about these building methods. There are thousands of low income housing groups working on this cause. And, there doesn’t seem to be a shortage of information on how to build affordable housing, and yet the lack of decent housing persists. So what’s going on? What’s the real problem here?

I don’t claim to have all the answers, but I venture to say the main problem stems from social and political issues. This includes failure of government to direct resources to the right place. The money spent on the wars in the Middle East, for instance, could have funded millions of simple houses.

Many of the world’s poor are already living in a nightmarish world. The houses in the photo above may not have clean water, toilets or land rights. Sewage may flow through the canal. The neighborhood may be near a landfill and polluting factories. Basically, the sort of place no one should have to live.

As you can see it’s a complex problem. I would love to hear your opinions on how to improve things.

For a better understanding of poverty see Poverty Facts and Statistics
“The poorer the country, the more likely it is that debt repayments are being extracted directly from people who neither contracted the loans nor received any of the money.” Source 25