Cob, a mixture of subsoil and straw, was historically used in England and there are examples of cob buildings over 500 years old. Despite renewed interest, cob construction remains the niche activity of a few enthusiasts. There are no standards for making and using cob, and insulation needs to be added to the walls in order to meet building regulations.

A joint British-French project aims to address these issues and move cob from obscurity into the mainstream. Called CobBauge, the conjoined British and French names for the material, the project is being led by Plymouth University. Other partners include Caen University, the Graduate School of Construction Engineers of Caen, Earth Building UK and Ireland, and Hudson Architects. The project started in 2017 and has now reached the stage where the walls of CobBauge’s first UK building have been completed. 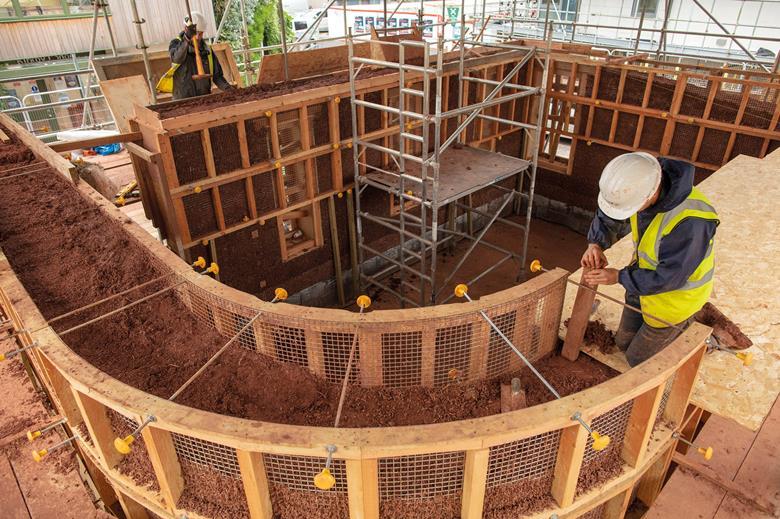 “The issue is getting through building regulations.” explains Steve Goodhew, the Plymouth University professor leading the project. According to Goodhew, a cob wall would need to be over a meter thick to meet the minimum U-values. “Anyone with a commercial sense isn’t going to accept that,” he says. The project aims to make cob commercially viable by backing it with clear performance and usage data showing that wall thicknesses can be kept below 600mm (2 feet) and built easily with industry standard equipment. 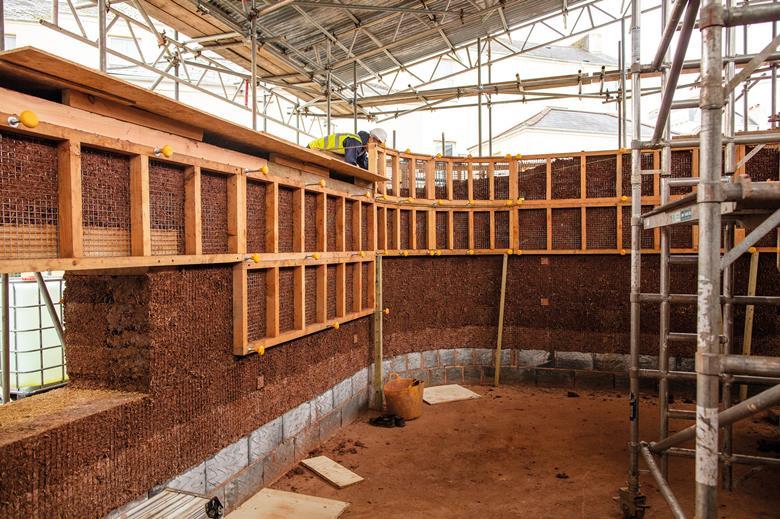 The wall is built in one go to form a monolithic structure, eliminating the secondary insulation fixing process. The insulating layer can be placed on the outside for regularly occupied buildings to take advantage of the thermal mass of the inner, structural layer. For buildings with occasional heat demand, such as meeting halls, the insulation could be placed on the inside for faster warming-up. Getting to this point has taken years of research. The team experimented with six French soil types and six British ones, as well as with six different types of fiber. 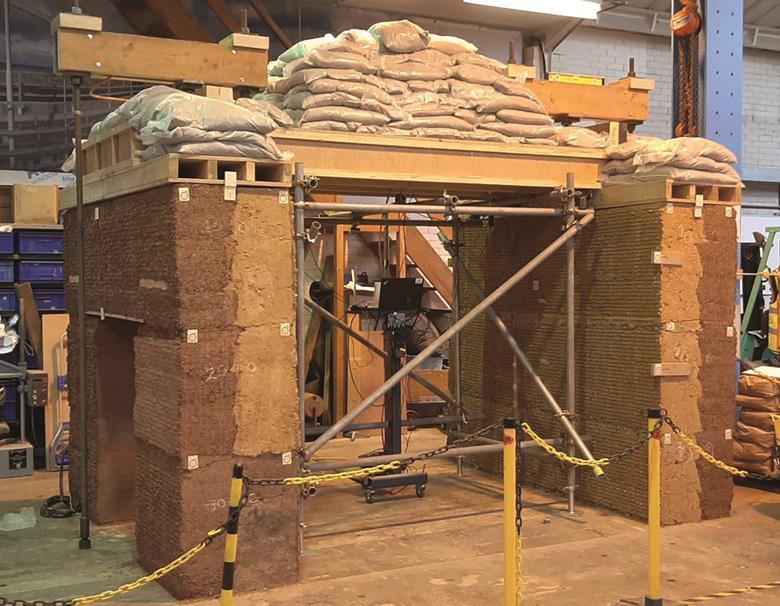 The load-bearing capacity of the wall is being tested in the university’s civil engineering laboratory. Two parallel walls have been built and loaded with a combination of sandbags and hydraulic jacks. These have been progressively loaded and at the time of writing were carrying a total of 11.3 tonnes, which comfortably exceeds the structural requirements for a two-storey residential building. 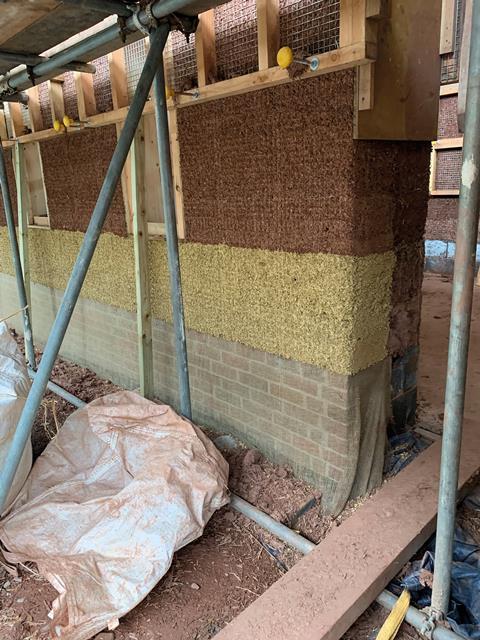 A new building is being constructed on Plymouth University’s campus as part of the Sustainable Earth Institute and is a single storey teaching and meeting space. The design is deliberately modern, with crisp, white rendered walls and a single pitch roof.

The building features a conventional strip foundation and a 600mm (2 feet) high plinth built with an outer brick skin and a double-block inner one, with the cavity infilled with foamed glass insulation. The slab is built on foamed glass and features a high percentage of cement replacements to minimise its carbon footprint. The roof of the structure includes a generous overhang to keep water away from the walls.

The rich red soil for this project was sourced from an area with a high number of cob buildings. For the structural mix, water and straw are combined with the soil using a rear-mounted bucket on an excavator in a skip. The clay for the insulating section of the wall is placed in a tank of water for a few days to enable it to break down. This is then mixed up with a plasterer’s paddle mixer. “You get a wonderful mixture that is like chocolate mousse,” Goodhew says. The slip is mixed with hemp shiv in a ratio of three parts of hemp to one of slip in a vertical axis mixer.

Specially designed formwork is used to place the two mixes. This consists of a timber frame 600mm (2 ft.) high and faced with mesh. A wooden box occupying the half of the wall where the insulating layer will go is positioned on the inside of the formwork and buckets used to place the structural mix. This is compacted by treading and beating the material down with a wooden thwacker. Then the wooden box can be removed and the insulating mix placed and compacted, and the process repeated around the building perimeter. The two different mixes bond firmly to form one homogeneous structure.

Goodhew says that a layer 300mm (1 ft.) deep could be placed in one day. The formwork can hold two layers and is used two sections deep – in other words, enough to support four layers. The cob is given a week and a half to dry – a process aided by using a mesh for the sides of the formwork rather than solid board. Once the cob is sufficiently dry, the lower section is removed and placed over the existing top section ready for the next two layers. There is very little apparent shrinkage, which needs to be below 2%. 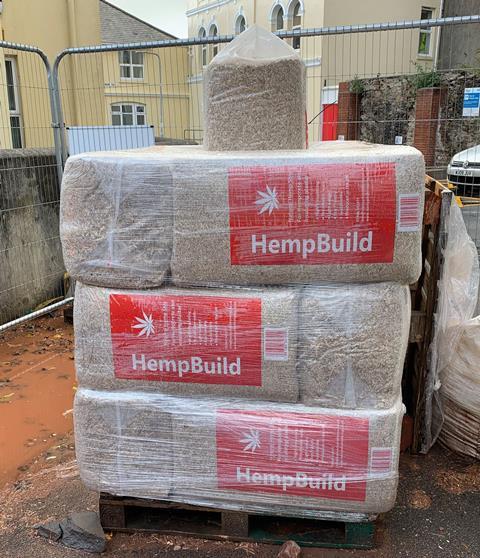 The cob walls took about seven weeks to complete and will be finished with a clay plaster internally and a lime render externally. The insulating layer of cob is friable and easily damaged – the render will protect it from abrasion and driving rain, plus it helps give the building a more modern, crisp appearance.

Goodhew concedes that cob has some disadvantages, which include the time needed for the material to dry before the next layer can be placed. He says this would not be such an issue where several houses are being constructed on a development, as the cob team could place a layer then move onto another home the following day.

Goodhew accepts that cob is not going to take over the world but sees it as a positive contribution to a basket of zero carbon construction solutions. He says the material is ideal for areas of the UK where there is a tradition of cob construction, as the materials and skills are more likely to be available. He says councils and housing associations are more likely to embrace cob than are private housebuilders, as many of these have ambitious carbon reduction targets and are happier to take on innovative forms of construction.

You can read the original article at www.building.co.uk