Overall, straw is a sustainable material that has plenty of redeemable features when it comes to construction, though it may not be suited for everyone or every situation. Take time to look at the risks and rewards (and limitations) while considering a straw bale house.

Straw bale houses are considered eco-friendly thanks to the main material, straw, being a completely renewable byproduct of the agricultural industry. Straw comes from growing cereal grains like wheat, oats, and rice—the straw itself is made up of the dry stalks of the cereal plants after the grain has been removed. 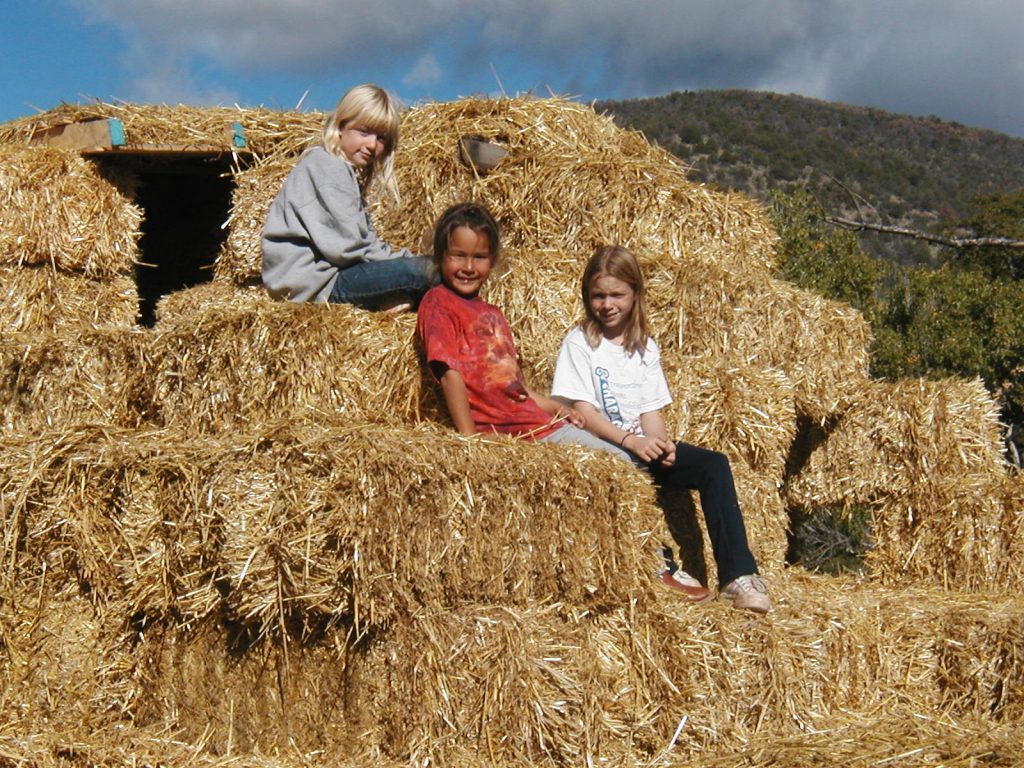 It’s been used for thousands of years as a building material for reinforcing clay or mud structures as an inexpensive, renewable resource with good insulating value. Straw already has many uses, such as mulch or bedding for animal pens, and can be regrown quickly each year rather than the lengthier time it takes for a tree to mature for lumber.

Harvesting lightweight straw also requires less energy than producing and transporting wood—farmers can even leave it in the fields to protect soils from erosion, add organic matter, or return nutrients to soil. The core material of a straw bale house can be returned to the earth at the end of its life. The straw, the natural clay plaster, and most other parts can simply be plowed back into the soil to decompose naturally.

Straw is cheap (sometimes free) and the entire process reduces construction waste that can have a negative impact on the environment; any excess straw or natural plaster can be used on site in compost or as ground cover to protect the soil. One paper found that straw bale buildings save 40% of construction costs when compared to traditional homes. Not only is straw typically less expensive than traditional building materials like wood, concrete, and steel, a straw bale house can cost less to heat or cool due to its high insulation factor. 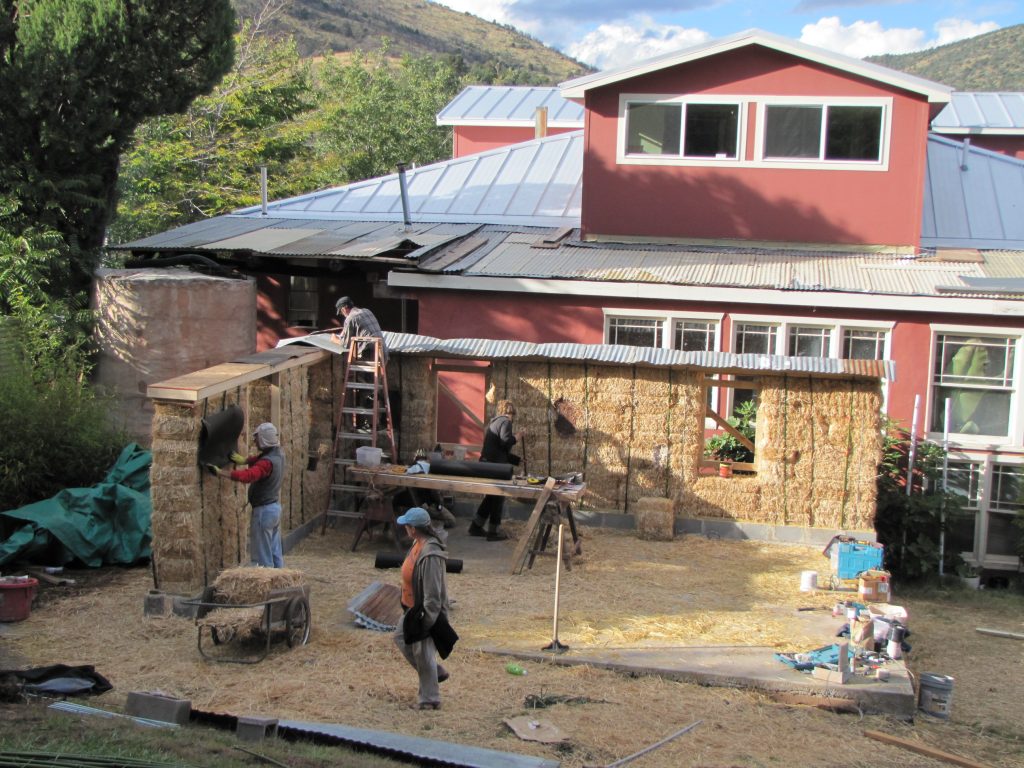 This one may seem far-fetched, but straw bale homes don’t actually pose a higher fire risk than traditional homes (once they’re finished, that is). Since the straw bales are tightly packed, there isn’t much airflow available to sustain a fire. In general, a straw bale home that’s covered with plaster, drywall, or stucco is considered the equivalent fire resistance as a wood frame construction. According to fire safety tests conducted by the National Research Council of Canada, a straw bale house was able to handle temperatures topping 1,850 degrees Fahrenheit for two hours.

Growing and processing straw doesn’t take much energy outside of the sunlight needed during its growth phase, the bailing process, and transporting the bales to the construction site. A 2017 study in the Journal of Building Engineering performed a Life Cycle Assessment with a straw bale wall to investigate its energy and environmental performance. Researchers found that while the wall offered adequate thermal insulation under steady winter conditions, the lightness of the structure could be detrimental for unsteady summer conditions and lead to overheating in warm climates. Overall, the paper concluded that the use of straw bales in walls is capable of reducing both energy and carbon embodied in a building. Studies in Italy show that the embodied energy (the sum of all the energy required to produce the home) is about half that of a traditional home, while the CO2 equivalent emissions differ by over 40%. 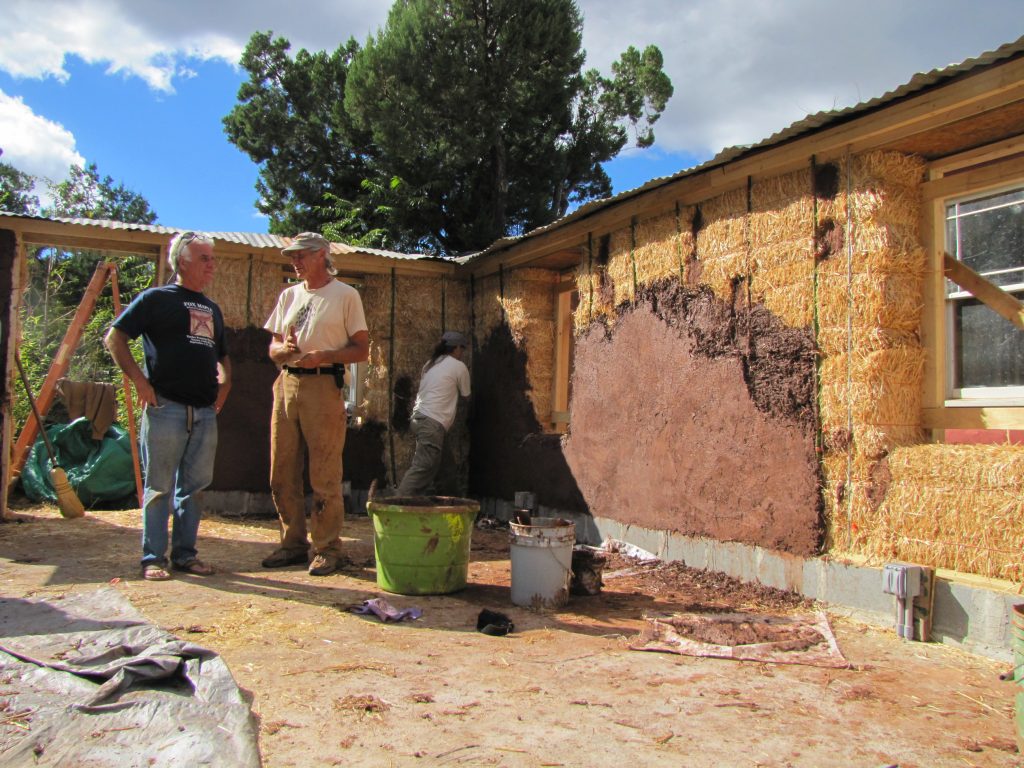 Apart from dealing with difficult protocols when planning a straw bale house, some states may not even account for them within their building codes; this can make it challenging to obtain a building permit. Whether or not your state has a building code for straw bale construction depends on the region. Those planning to build a straw bale home will want to research the code book for their particular state and check in the alternative building section as well as any local or state addendums. In California, for example, straw bale homes have their own guidelines; these include a minimum bale wall thickness of 13 inches, a one-story maximum in the case of buildings with load-bearing bale walls (unless it has been designed by a civil engineer or architect licensed by the state), and at least 40 other requirements.

Likewise, city officials may find the concept unconventional and be uncomfortable accepting the straw bale house based on the home’s aesthetics compared to the rest of the area.

Moisture can come from cracks in the plaster, plumbing pipes, damage from flash flooding, or in instances where windowsills or joints have not been properly sealed. For this reason, climates known to be particularly wet or humid may not be ideal for straw bale houses. To keep the house in good condition, it’s important to periodically inspect the plaster layer for cracks and holes to avoid excessive dampness and subsequent mildew. Straw bale houses are more susceptible to moisture-related problems since straw will decay and weaken if it becomes damp, which can quickly turn dangerous for inhabitants.

Since often there is no wood supporting the structure, straw bale houses do not have studs in the walls. Hanging anything on the walls, including shelves, cabinets, or even picture frames, will be a much more complex endeavor than in a regular home.

Some of the biggest concerns over straw bale houses have to do with insect and rodent issues, though straw bale enthusiasts would argue that selecting and applying the appropriate plaster would take care of either. However, depending on where they came from, straw bales may arrive at the building site already containing grain-eating pests. 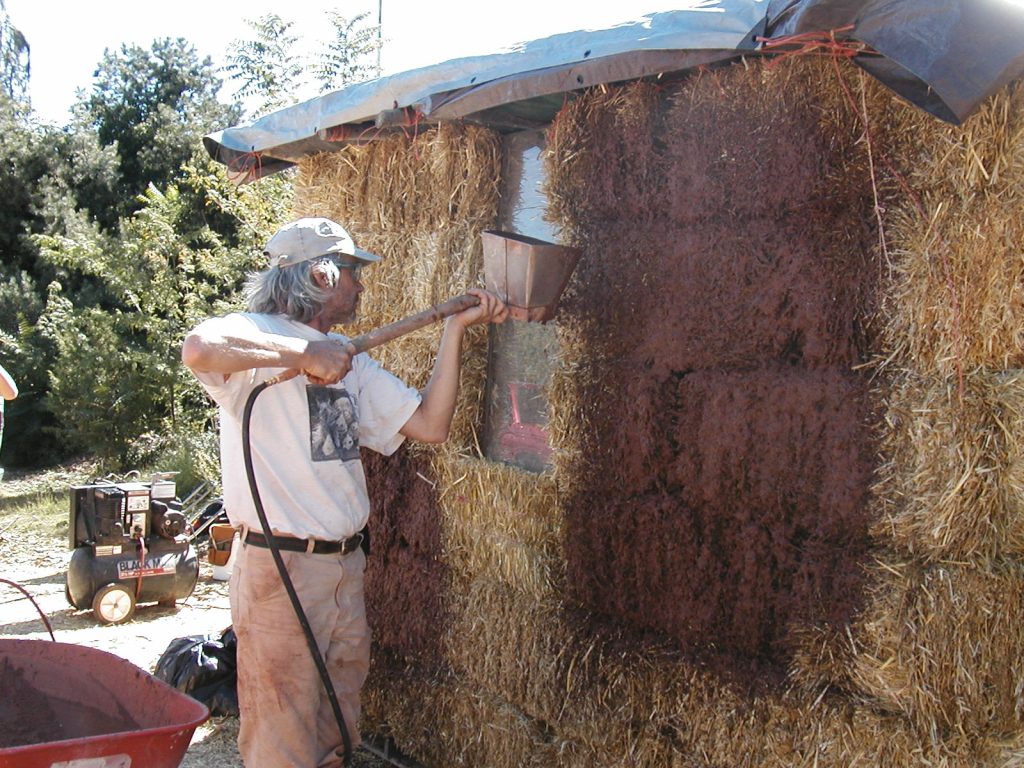 The plaster layer that keeps the straw dry and safe from mold or mildew doesn’t last forever. Once it starts to degrade, it must be replaced, meaning maintenance for a straw bale house is required more often than with most other modern homes. The layer of plaster on the outside ranges from cement stucco, which can cause moisture issues when it cracks, to clay-based earth plasters, which require reapplication regularly.

You can read the original article at www.treehugger.com

2 thoughts on “Pros and Cons of Straw Bale Building”