Thousands gathered in the World Heritage city of Djenné in Mali for the annual Grand mosque plastering ceremony. This adobe building is considered to be one of the greatest achievements of the Sudano-Sahelian architectural style. 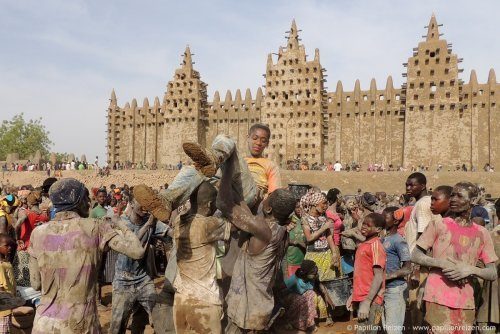 The plastering is done with banco, which is a mixture of sand, water, shea butter, rice bran and baobab powder to protect the mosque from bad weather before the rains set in. The entire community of Djenné takes an active role in the mosque’s maintenance via the unique annual festival.

In the days leading up to the festival, the plaster is prepared in pits. It requires several days to cure but needs to be periodically stirred, a task usually falling to young boys who play in the mixture, thus stirring up the contents. Men climb onto the mosque’s built-in scaffolding and ladders made of palm wood and smear the plaster over the face of the mosque.

Another group of men carries the plaster from the pits to the workmen on the mosque. A race is held at the beginning of the festival to see who will be the first to deliver the plaster to the mosque. Women and girls carry water to the pits before the festival and to the workmen on the mosque during it. Members of Djenné’s masons guild direct the work, while elderly members of the community, who have already participated in the festival many times, sit in a place of honour in the market square watching the proceedings.

You can read the original article at www.africanexponent.com