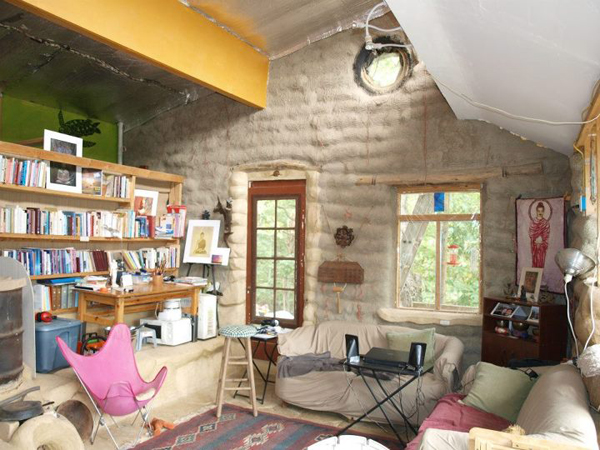 “Building an earthbag home is possible to do even if you have no construction knowledge. The two women who built the earthbag home I toured built it basically all by themselves in about nine months and consulted an earthbag home book to guide them. They had people help here and there, but for the most part the two of them built their home, which amazes and inspires me.

The women noted that for their 14-x-20-foot home it cost them about $10,000 to build. For less than the average cost of a new car, they built a small home. I know you’re thinking that a 14-x-20-foot space isn’t a whole lot, and it’s not really designed for more than two people to comfortably live in. However, you can make these structures bigger and finish them out to look more like a traditional home. If you want to make your earthbag house look more traditional, you might have to spend more money, but you do have that flexibility.

As mentioned in the other Zing post about earthbag homes, these types of homes provide a pretty much impenetrable fortress. The women living in the earthbag home mentioned that every once in a while they get gale force winds or even tornados in their area. They’d sit in the living room watching trees fall around them and even on their house but did not flinch one bit. They even said a tree fell on their house and it broke in half! The only thing damaged in the house was the papercrete exterior, which can be patched up easily. Several times the women mentioned they can’t think of a safer place to be than their home during severe weather. I really couldn’t agree more. The house basically felt like a rock; the walls were basically 12-14 inch thick stones. [Ed.: Most are 18” thick.]

More at the source: Quicken Loans.com

See their previous article: What is an Earthbag Home and Why Should You Build One?

I found this article while testing out the IxQuick.com search engine. Their privacy page says they don’t record your IP address. With all the NSA spying revelations lately, I’d like to find a search engine with the speed and thoroughness of Google without the associated spying software.