I am pleased to report that after a little more than a year of periodic work on the Ninos y Jovenes Earthbag Project in Mexico we have finally come to a successful point of completion!  We put a final coat of white roof paint on the outside, making the dome gleam like a jewel. 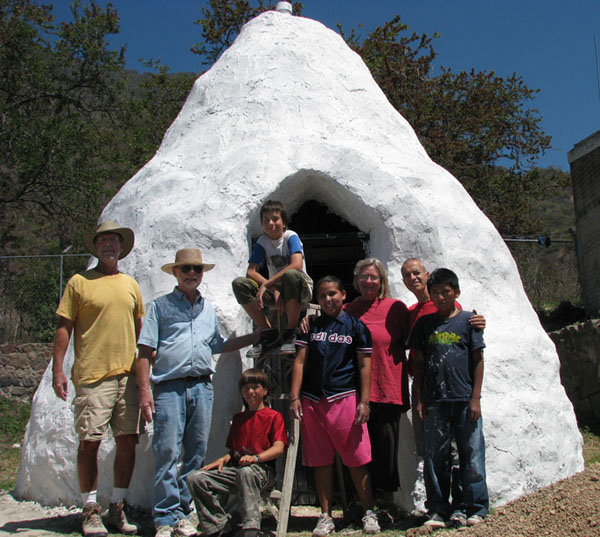 Here you can see our smiling faces with the finished dome in the background.

This project was only possible with the dedicated cooperation of the Lake Chapala Green Group,  the students and staff at the Ninos y Jovenes boarding school in San Juan Cosala, the many adults who came from both the Mexican and the foreign community to join our Saturday morning work force, and the generous donation of funds from many people to help with the cost of materials.

The project has satisfied every aspect of our intention to create a physical demonstration of an ecological way of building a small house for very little money. Many of the students who worked with us are native Huicoles who can now take what they have learned back to their communities to duplicate if  they want. We will be giving them printed instructions in Spanish with photos of the various phases of the project to help them remember the important steps in the process. 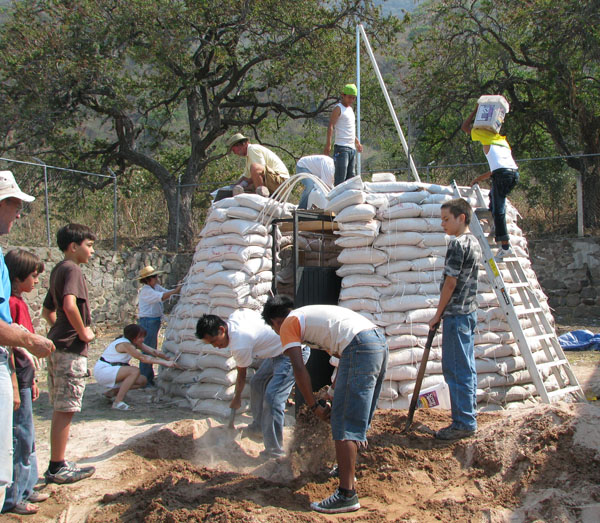 In addition to the students, we have worked along with at least five different Mexican adults, and as many people from the foreign community, who are planning to take what they have learned to other localities to build with earthbags. Some of these other projects are already well along, and they include both homes and a school in an alternative community near Guadalajara.

We have succeeded in having the dome project publicized in the media, with at least four articles having been published in local newspapers and magazines, both in English and Spanish. So is has been a huge educational success, and of course the dome itself will stand on the grounds of the school for a very long time I expect. It will be a beacon and a demonstration for all to touch and experience who stop by to see it. We intentionally left some of the interior of the dome free of plaster so that people can immediately see how it was actually built with the bags of soil. 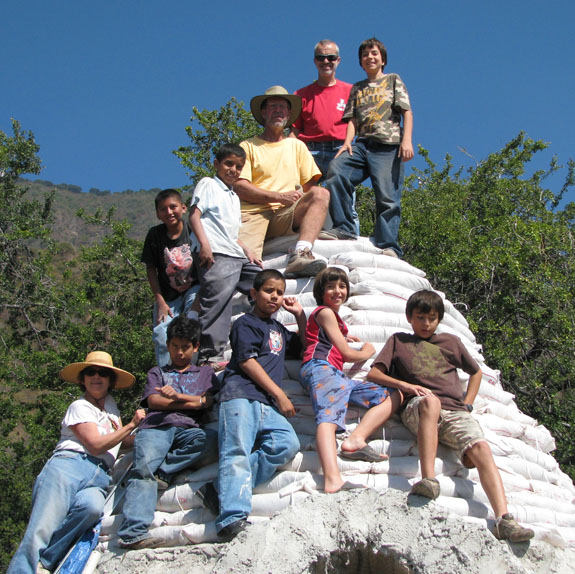 We initially estimated that we would need to spend a little over $1,000 US to build the dome, and this would include the purchase of new bags, barbed wire, a custom steel door fabricated, windows and vents, wood to build a loft inside, soil delivered to the site, plastering materials, and some basic tools and tarps. In actuality, we spent closer to $1,500 US, mainly because we spent more for tools (and other reusable supplies) and plastering supplies than anticipated. If someone used soil dug on the site, found used bags and/or barbed wire, and found other used components, this cost could easily be halved.

The potential living space that this small dome provides is about 200 sq. ft., so that would be between about $4 and $8 per sq. ft…..not too bad in this day and age! And not only is the building quite ecological, with mostly soil as the building material, but it will be much better at conserving energy because the walls are so thick, so it would be more comfortable than conventional buildings to live in.

I want to thank everybody who has helped out with this project; it has been immensely worthwhile. You can see a complete set of photos and description of the process of building this dome at www.flickr.com and a slide show of the same pictures at www.flickr.com