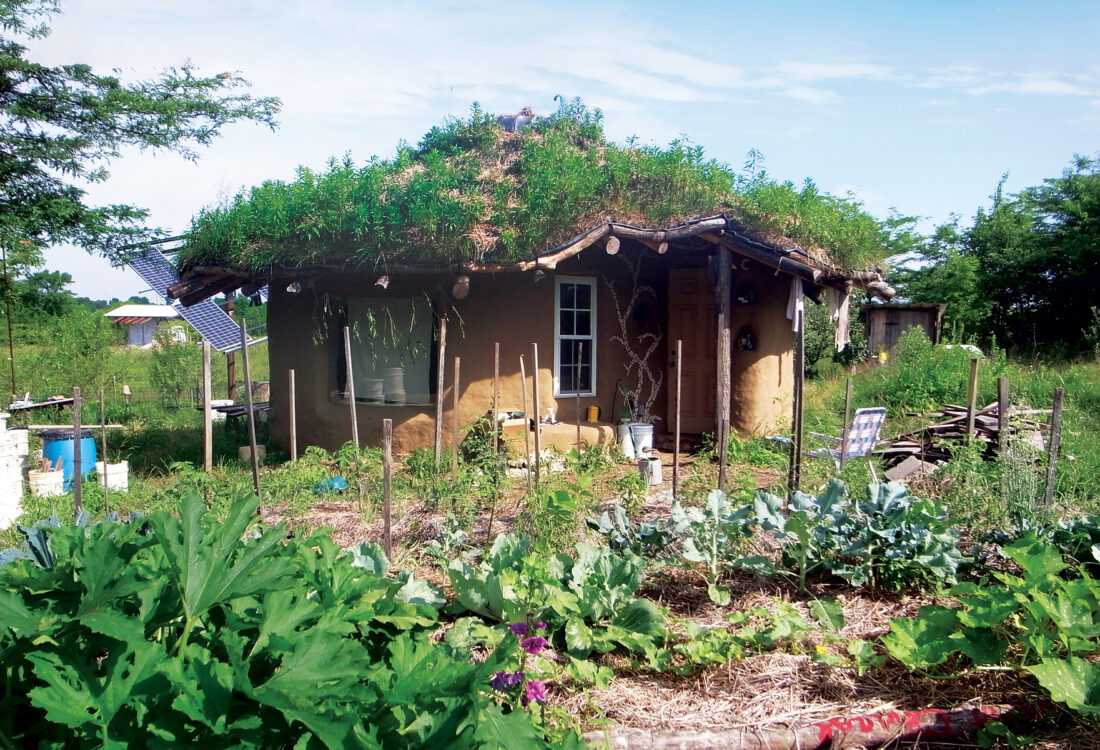 A Cob Construction Appendix has recently been approved for inclusion in the International Residential Building codes in the United States and a number of other countries. The new code requires builders to test their cob mixes for shrinkage, compressive strength, and, in some cases, modulus of rupture.

The shrinkage test is the most straightforward and can easily be done on-site by the builder. All you need is a box that is 24 inches long, 3-1/2 inches wide, and 3-1/2 inches high. Line the box with thin paper or plastic sheeting before filling it completely with cob, troweled smooth on top. Leave the cob in the box to dry completely. If you’re in a hurry, you can put the cob block in the oven to speed the drying process after it becomes firm enough to remove from the box without deflection. To meet the code’s requirements the cob block should shrink no more than 1 inch out of its 24-inch length. To test for compressive strength five samples of the cob mixture, 4 by 4 by 8 inches tall, must be made and dried without using an oven. When the blocks are dry, coat the two 4-by-4-inch faces of each one with a thin layer of plaster of Paris to make them completely flat and parallel. These samples can then be submitted to a laboratory for testing, or if the building official agrees, the builder can conduct these tests. Even if your building official insists on laboratory testing, you may still want to pre-test your mix to be certain it will meet the strength requirements. That way, you can adjust your mix if necessary by using a different clay source or different ratios of clay to sand to maximize its strength before submitting samples to the lab.

Here’s how you can conduct your own compressive strength testing: Since the standard cob block is 4 by 4 inches when viewed from the top, the block has a cross-sectional area of 16 square inches and must support a minimum of 960 pounds. Testing blocks on-site presents three main challenges: applying force to the test block, distributing that force evenly across the surface of the block, and measuring how much force is being applied when the block fails. Stacking 960 pounds of weight on top of a block would be dangerous; when the block breaks, all of that weight would fall. The safer approach is to use a long (and strong) lever to apply the force, a piece of plywood to distribute the load to the top of the specimen, and a round bar to accurately measure the length of the lever and apply force to the center of the cob block. Be sure to secure the stationary end of the lever under something heavy; that end of the lever will push up on the restraint with over 1,000 pounds of force if the cob meets the standard. Some objects that could provide sufficient anchoring weight include the bucket or structural beam of a tractor, the tow hitch of a fully loaded truck, or a portion of cob wall specifically designed to withstand and distribute these upward loads.

To measure the force applied to the block, hang a bucket securely from the end of the lever and slowly fill it with sand. Add the sand gradually while another person watches for cracks in the test block. When the block has broken, the bucket will droop or land on the ground. Once the block has cracked or compressed, stop adding more sand. Weigh the sand and bucket to determine the force applied to the lever. The mechanical advantage is found by dividing Length A by Length B in the figure. The equation for how much force was applied to the test block can be written: F = weight × A ÷ B. To calculate the pressure on a standard 4-by-4-inch test block, the equation would be PSI = (A ÷ B) × weight ÷ 16. Lengths are assumed to be in inches and weight in pounds.

One final test is required by the code, but only for cob that will be used in shear panels. These cob mixes need a demonstrated modulus of rupture of 50 psi or greater. Modulus of rupture, also known as “flexural strength,” is a measurement of a material’s capacity to withstand bending forces without cracking. The samples for this test must be 6 inches wide by 12 inches long by 6 inches high. Again, top and bottom surfaces (two of the larger faces of the prism) should be coated with plaster of Paris after the samples are dry. Five samples must be submitted to a testing laboratory (unless the building official agrees to on-site testing) and the fourth-highest value must exceed 50 psi. The same testing lever described above can be used to test modulus of rupture with only minor changes to how the test block is supported. Rather than placing the block on a flat, hard surface, support it on two metal pipes or other strong cylinders. Measure the distance between these cylinders for use in the calculation later. Apply the load to a third cylinder on top of the block, placed halfway between the two supporting pipes. The force applied to the test block can be found in the same way as in the compression testing. To calculate modulus of rupture, the equation is MOR = (3 × force × L) ÷ (2 × W × t²), where “t” and “L” are shown on the figure and “W” is the width of the specimen. For the standard 6-by-6-by-12-inch test block, this reduces to MOR = (3 × Force × L) ÷ 432. Again, lengths are assumed to be measured in inches and force measured in pounds. Setting up your testing apparatus may be a challenge, but no more so than many other stages of the building process.

You can read the original article at www.motherearthnews.com

Read more about the cob code update at Cob Code.