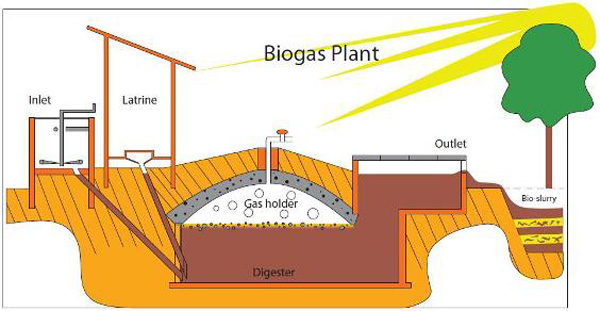 Our blog focuses on low cost, sustainable ways of building homes with local resources. It’s equally exciting and practical learning about alternatives to costly centralized grid systems (electrical, gas, sewer, water) that tend to lock people into the system and make them vulnerable to price controls. Biogas is one of many renewable energy systems that provide greater independence at very low cost. Biogas is especially practical in rural areas where running power and gas lines are cost prohibitive. Distributed systems such as biogas and other biofuels, solar water heaters, wood stoves, solar ovens, etc. located at or near the source typically keep functioning during times of emergencies. When a whole city or region is without power, water and sewer during a blizzard, your family can be safe and snug.

“Biogas typically refers to a gas produced by the biological breakdown of organic matter in the absence of oxygen. Organic waste such as dead plant and animal material, animal feces, and kitchen waste can be converted into a gaseous fuel called biogas. Biogas originates from biogenic material and is a type of biofuel.

Biogas is produced by the anaerobic digestion or fermentation of biodegradable materials such as biomass, manure, sewage, municipal waste, green waste, plant material, and crops. Biogas comprises primarily methane (CH4) and carbon dioxide (CO2) and may have small amounts of hydrogen sulphide (H2S), moisture and siloxanes.

The gases methane, hydrogen, and carbon monoxide (CO) can be combusted or oxidized with oxygen. This energy release allows biogas to be used as a fuel. Biogas can be used as a fuel in any country for any heating purpose, such as cooking. It can also be used in anaerobic digesters where it is typically used in a gas engine to convert the energy in the gas into electricity and heat. Biogas can be compressed, much like natural gas, and used to power motor vehicles. In the UK, for example, biogas is estimated to have the potential to replace around 17% of vehicle fuel. Biogas is a renewable fuel, so it qualifies for renewable energy subsidies in some parts of the world. Biogas can also be cleaned and upgraded to natural gas standards when it becomes biomethane.

In India, Pakistan and Bangladesh biogas produced from the anaerobic digestion of manure in small-scale digestion facilities is called gobar gas; it is estimated that such facilities exist in over two million households in India and in thousands in Pakistan…

The Chinese have been experimenting with the applications of biogas since 1958. Around 1970, China had installed 6,000,000 digesters in an effort to make agriculture more efficient. During the last years the technology has met high growth rates.”