In a thesis written by Bryce Daigle, titled “Earthbag Housing: Structural Behavior and Applicability in Developing Countries,” It was determined that the compressive strength of unplastered earthbag housing specimens meets or exceeds the vertical compressive strength of conventional stud-frame and alternative construction techniques such as straw bale housing technology, using a variety of fill materials, with the greatest strength being observed for soil-filled bags. The weakest specimens tested (the small, granite gravel-filled 9-bag stacks) obtained maximum compressive strengths almost 10 times as great as those typically achieved by conventional stud-frame housing in terms of load per metre of wall length.

It should be noted that the above conclusions regarding earthbag housing are based on the unplastered tests conducted in this thesis. It is possible that plastering of specimens will lead to increased stiffness. 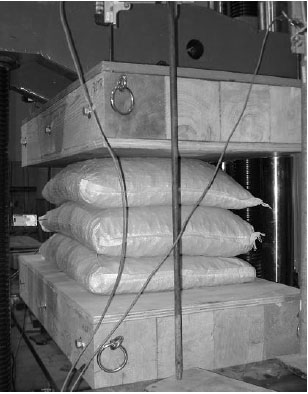 Furthermore, the thesis states that with regard to constructability and material availability, earthbag housing is a very attractive construction technique. Soil, of one form or another, is available in virtually all inhabited regions of the world, and polypropylene bags are already manufactured for a variety of purposes in many developing and developed countries. The level of expertise required to assemble an earthbag house is attainable by virtually anyone, regardless of previous construction experience.

Soil-filled earthbag specimens were stronger and stiffer than gravel-filled specimens fabricated with bags of the same size and assembled with an identical stack height. There was little difference in stiffness between specimens filled with topsoil and those filled with a 4:1 ratio of topsoil to masonry sand.

For unplastered specimens, it was found that a folded, pinned closure was sufficient to prevent premature failure due to fill loss through the bag opening. It was also found that taller earthbag stacks led to lower specimen strength and stiffness.

The entire 182 page thesis is available to download as a PDF file at earthbagbuilding.com.