Wood provides a natural form of carbon sequestration, so there’s a move to use timber in place of industrial materials for building. Indeed, some countries are calling for public buildings to be made at least partly from timber, and large-scale timber buildings have been appearing around the world.

As the timber industry seeks to produce wooden replacements for traditional concrete and steel elements, the focus is generally on harvesting the straight sections of trees. Irregular sections such as knots and forks are turned into pellets and burned, or ground up to make garden mulch, which will decompose within a few years; both approaches release the carbon trapped in the wood to the atmosphere.

Catlin Mueller and her Digital Structures research group at MIT have been developing a strategy for “upcycling” those waste materials by using them in construction — not as cladding or finishes aimed at improving appearance, but as structural components. “The greatest value you can give to a material is to give it a load-bearing role in a structure,” she says. Using upcycled materials in place of those high-carbon systems is especially impactful in reducing emissions. 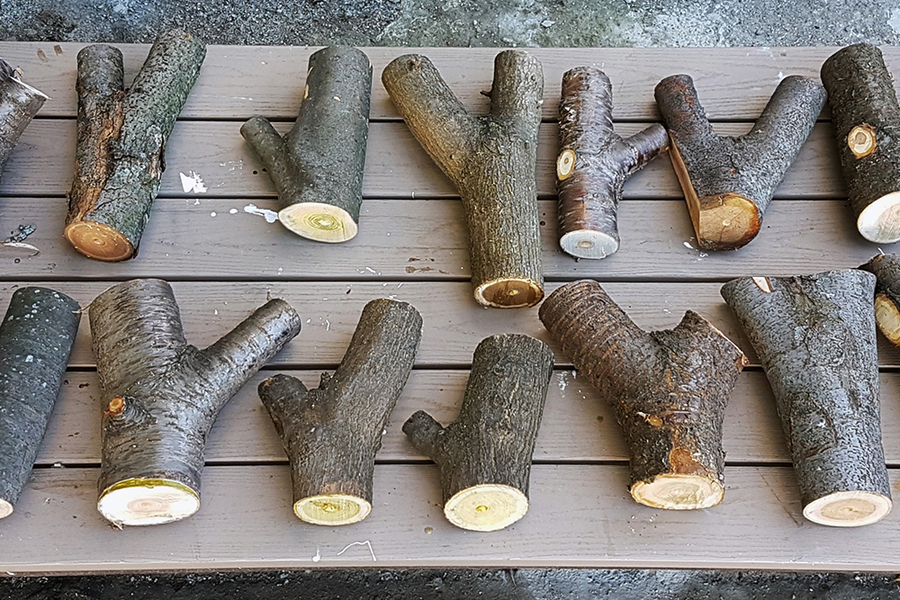 “Tree forks are naturally engineered structural connections that work as cantilevers in trees, which means that they have the potential to transfer force very efficiently thanks to their internal fiber structure,” says Mueller. “If you take a tree fork and slice it down the middle, you see an unbelievable network of fibers that are intertwining to create these often three-dimensional load transfer points in a tree. We’re starting to do the same thing using 3D printing, but we’re nowhere near what nature does in terms of complex fiber orientation and geometry.”

She and her team have developed a six-step “design-to-fabrication workflow” that combines natural structures such as tree forks with the digital and computational tools now used in architectural design. While there’s long been a “craft” movement to use natural wood in railings and decorative features, the use of computational tools makes it possible to use wood in structural roles — without excessive cutting, which is costly and may compromise the natural geometry and internal grain structure of the wood.

Given the wide use of digital tools by today’s architects, Mueller believes that her approach is “at least potentially scalable and potentially achievable within our industrialized materials processing systems. Tree branches have a very specific geometry that sometimes lends itself to an irregular or nonstandard architectural form — driven not by some arbitrary algorithm but by the material itself.”

Step 2: Create a digital material library of available forks, where each fork is represented by a “skeletonized” version showing three straight bars coming together at a point. The relative geometry and orientation of the branches are of particular interest because they determine the internal fiber orientation that gives the component its strength.

Step 3: Find the best match between the initial design and the material library. A typical architectural design is filled with Y-shaped nodes where three straight elements meet up to support a critical load.

Step 6: Assemble the available forks and linear elements to build the structure.

“All the information for the geometry is embedded in the joint, so the assembly process is really low-tech,” says Mueller. “It’s like a child’s toy set. You just follow the instructions on the joints to put all the pieces together.”

Plans include working with larger material libraries, some with multibranch forks, and replacing their 3D-scanning technique with computerized tomography scanning technologies that can automatically generate a detailed geometric representation of a tree fork, including its precise fiber orientation and density.

With digital tools, it has become easy for architects to analyze the embodied carbon or future energy use of a design option. “Now we have a new metric of performance: How well am I using available resources?” she says.

You can read the original article at news.mit.edu