It is mid-afternoon in Nakuru County, Nairobi, a few meters from the shores of Lake Elementaita. On this day, a group of men and women, old and young, are busy working at a construction site. From a distance, nothing looks unusual about the ongoing work. After all, Saturday is a working day for most people. It is not until you move closer that you realise that this is not your usual building work which is ongoing.

The ”construction workers” are mostly farmers, agricultural workers, and a few masons from around the area. They are actually learning about natural building while doing it. It is here that we meet Ms Elke Cole, a natural building specialist, a volunteer who has travelled all the way from Canada to come to Elementaita to show how this technology is used.

“My idea is to pass the knowledge of natural building to the local people so that they can do the same using readily and locally available materials,” says Ms Cole. 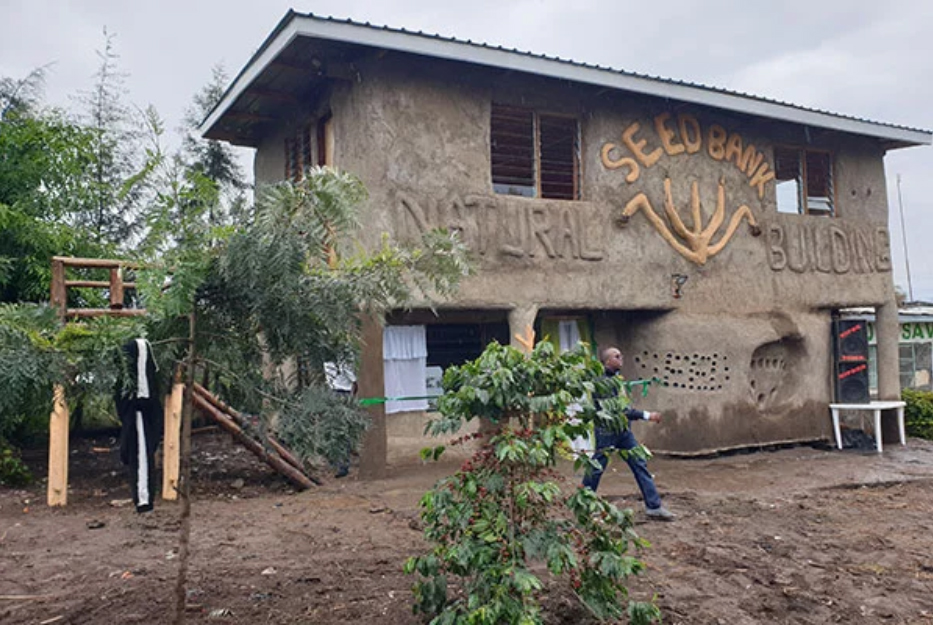 This particular building is a seed bank in the compound that hosts Seed Savers Network. The upper floor of the building hosts an office which gives a scenic view of Lake Elementaita. The seed bank is made of locally available materials, some of which would otherwise have ended up being toxic to the environment if not well recycled.

“One basic principal of natural building is to use natural materials which are locally available and recyclable,” says Ms Cole, adding that in most cases, this concept endeavours to avoid the use of cement due to its massive carbon footprint.

The grass straws are used on the walls and smeared with a mixture of fine soil before being painted to make colorful walls. The building also has an underground hole in which some seed varieties that require a cool and dark environment will be stored.

Francis Ngiri, a farmer based in Makongo village, says he regrets having discarded so many gunny bags which he considered as litter. “I used to throw away some of the bags and gave out others to anyone who wanted them. Little did I know that they would be so useful in construction around my homestead,” says Mr Ngiri who was mainly in charge of the decorative part of the one-storey building.

“At the end of this work, all those who participated in the construction will go home and think of what they can recycle and make the environment cleaner,” says Ms Cole. The technology is learnt hands-on and can be passed from one person to the other thus attracting more people to adopt it.

Finally, after about seven weeks of intensive yet interesting teamwork, stakeholders gathered to witness the official opening of this building of its kind.