In January 1973, when Fred Black was a first semester student at the University of New Mexico School of Architecture, the overwhelming sentiment in academia was that we had an environmental emergency in progress.  Humankind had been burning fossil fuels at an alarming rate since the beginning of the Industrial Revolution and there was hard, empirical evidence that we were changing the climate.  Our professors said we had to start designing structures that heated and cooled themselves, produced electricity, and actually improved the environment around them.  The oil embargo that same year reinforced our realization that the earth was finite as were our sources of energy.

So it was with a sense of urgency that he and his wife built their first solar home in 1977 in the high country near the Navajo Nation in western New Mexico.  It was built of stone and wood framing.  The floor was 3 feet below ground level to tap the natural warmth of the earth.  A windmill pumped water, a wood burning stove cooked meals (and provided back up heat) and they read at night by the light of kerosene lamps. 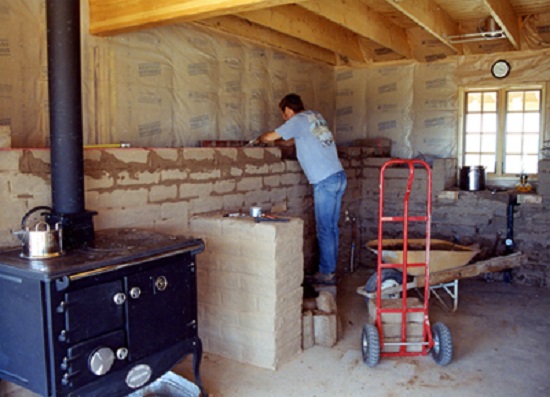 In 2000 they began building their third solar home on 200 acres in the high sage brush and forests of Taos County.  Technically, it was massively different from that first home.  The idea was for the house to be “off grid” and keep their carbon footprint below the world average of 4 tons per person per year,  (the average American puts out about 20 tons).  But we would actually have electricity and everything a “normal” house would have.

When it comes to building in the American Southwest, adobe is a natural choice because of its low embedded energy.  Traditionally, adobe has been the product of mud, straw, sunshine, and human toil.  These days, even with the use of a front-end loader and dump truck, it is still a very environmentally friendly building material.

Another natural choice here in the Southern Rockies is the use of sunshine to heat.  We have about 300 days of sunshine a year.   Winter storms come through, dump snow, and leave days of brilliant sunshine in their wake. In this climate, during the month of January, any south-facing window will gain more energy than it loses.  Make that window double glazed, put an adobe wall behind it, cover it at night with an insulative shade, and you have a heating system. 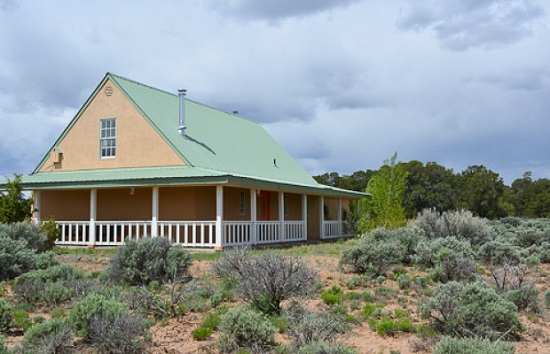 The winter sun is very low in the sky and, on a clear day, it floods the home with sunshine all day.  Typically, at the winter solstice, the adobe walls have a temperature somewhere between 75 and 78 degrees which will warm the house at night and through cloudy days.  Even a fire in the stove all day does not give you as much heat as one sunny day.

The opposite of winter, the high summer sun comes just a few inches into the house on the south side, producing little or no heat.  Strategic placement and size of north, east, and west windows keeps summer solar heating to a minimum.

They started building this house in the fall of 2000.  Like their first house, with no electricity on the site, this home was built entirely with hand tools.  Some things, like the concrete foundation, were contracted to professionals.  After that, every board was cut by hand, every nail driven with a hammer, and every ton of adobe mud was mixed by hand in a wheel barrow.  The house is basically a highly insulated wood frame house that surrounds 225,000 pounds of adobe.  Like a thermos bottle, the adobe walls are surrounded by insulation and kept warm in the winter and cool in the summer. 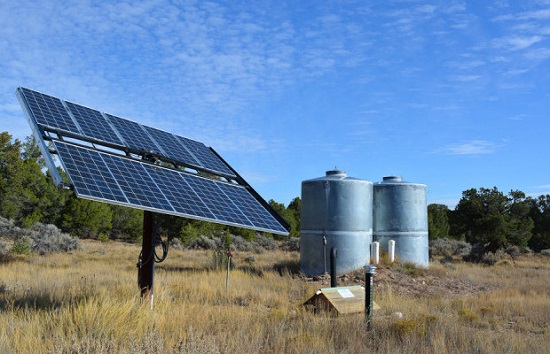 The well and house are each supplied with electrical power by 10 – 130 watt solar panels on solar trackers with banks of batteries that store energy for night and cloudy days. The refrigerator is the biggest load on the system because it is always cycling off and on.  They have a super efficient model and it just sips the energy.  Electronics, like the TV and computer, draw very little power and can be switched off when not in use to avoid “phantom loads”. The batteries will supply plenty of energy during a week without sunshine, although in 18 years, we have never seen that many consecutive cloudy days.

You can read the original article at www.motherearthnews.com