Research shows that, even in cloudy areas, a large chunk of our heating needs could be met with a few well-positioned (and well-managed) skylights.

“I’ve been interested in passive solar heating for quite a number of years, but we live in a cloudy climate. And there has been a lot of skepticism about how well passive solar heating can work when you have a winter that’s dominated by cloud cover and rain,” said Alexandra Rempel, a building scientist in the Environmental Studies Program at the University of Oregon. 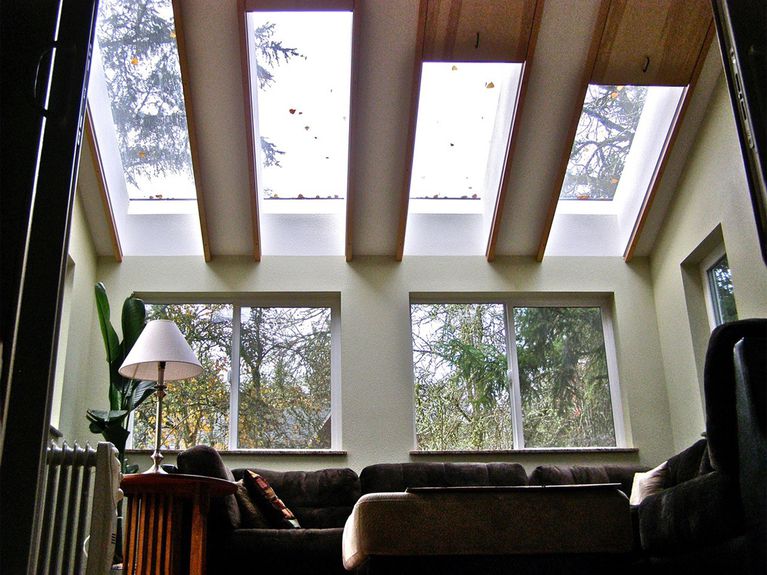 The researchers found that there is enough solar radiation available to provide about one-third of residential heating needs nationwide. The calculations were based on homes having 100 square feet of skylights oriented towards the south. To understand the potential, the researchers used home energy consumption data and paired it with satellite observations of solar radiation.

The passive solar energy collected couldn’t take the place of a heating system in most climates, but it could cut heating costs — especially in the fall and spring when temperatures aren’t so cold and the days aren’t so short.

In Western Oregon and Washington there’s enough solar radiation to provide about three megawatt hours of annual heating energy relief for homes with 10 square meters of well-positioned, unobscured skylights. This is enough to power the average U.S. home for more than three months in 2020. On the east side of the two states, where there’s less cloud cover in the winter, there can be more than 5 megawatt hours of passive solar energy captured — but heating costs are higher there, as well.

In some places promoting passive heating, the focus has largely been on windows and roof overhangs designed to maximize heat collection in the winter and sun blocking in the summer. Skylights have been more of an afterthought where the problems outweigh the benefits.

A U.S. Department of Energy publication on passive solar design states, “Sloped or horizontal glass (e.g., skylights) admit light but are often problematic because of unwanted seasonal overheating, radiant heat loss, and assorted other problems.” But the researchers found that skylights are ideal for capturing solar energy because of their orientation to the sun. It’s the angle of these skylights that allow this type of heat collection to be possible — especially in cloudy climates.

The cloudier the climate, the closer to horizontal the skylights should be in order to catch the diffuse solar radiation. “They’re broad optimums. If you’re off by 10 degrees plus or minus, that’s not so bad. You’re still getting 90% or some large fraction of the available energy,” Alan Rempel said.

Using more passive solar heating could free up capacity on the grid as the Northwest transitions away from fossil fuels by electrifying transportation and buildings.

The research was published in the Journal Renewable & Sustainable Energy Reviews.

You can read the original article at www.opb.org