It’s Sunday afternoon in College Park’s Calvert Hills neighborhood, and Desta Anyiwo — a 23-year-old student at the University of Maryland, College Park, — is being peppered with questions from curious onlookers.

He explains that he and a group of volunteers are building an eight-by-eight-foot structure through earth bag construction — the use of heavy bags of dirt, sand and other materials as building blocks for temporary housing. A completed structure, he said, can sustain heavy rain and high winds.

After a major earthquake struck Haiti on Jan. 12, killing more than 200,000 people, Anyiwo decided earth bag construction might be cheap and reliable enough to help the victims, many of whom are now homeless or live in tents. On Saturday, he and a group of about 20 people will leave for Haiti, where they will spend a week demonstrating, assisting and teaching Haitians how to build their own shelters. 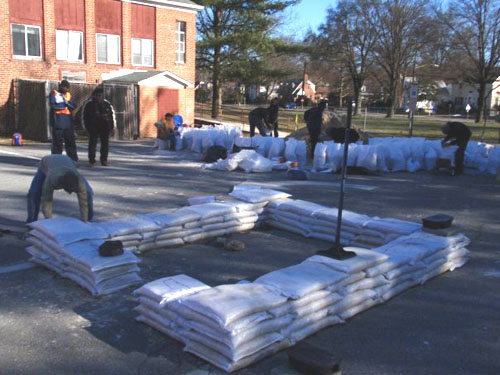 “They’re about to have a rainy season right now [in Haiti],” said Anyiwo, who helped organize the trip with alumni and faculty from Howard University in Washington, D.C., some of whom had previous humanitarian experience in Haiti. “Some people are raising money to send tents down … [but] this is a way more effective way of helping people.”

About 13 UM and three Howard students will make the trip, along with a handful of engineering professionals. Their main goal is to teach earth bag construction to Haitian residents and students in hopes that they’ll be able to teach others to use it for years to come.

Earth bag structures have been built in Haiti and in parts of Africa and the southwestern United States, but are still relatively rare, said Tom Marable, a professional engineer on the project. Anyiwo’s group spent three days in College Park building a test shelter to make sure they had experience with the method.

The earth bags were flattened and carefully placed, with each layer of bags held together by barbed wire and plaster or stucco. Finished structures are usually topped with a tarp, bamboo or thatch roof.

“[The materials] depend on what’s available in their area,” said Vicki Bleus, president of Washington, D.C.-based Phoenix Contractors Inc., which has lent engineering guidance. “If they’re near [Haiti’s capital city] Port-au-Prince, they might have access to crushed rubble.” 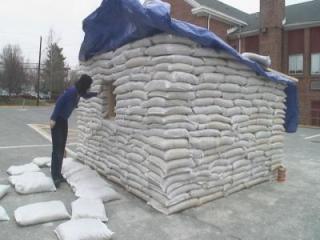 The group plans to bring about 4,000 polypropylene bags to Haiti, but all building materials will have to be found in the country. The College Park prototype required about 400 bags of dirt, so they hope to have enough bags to do a week’s worth of demonstrations before leaving March 20.

Each student paid about $800 to make the trip, while the professionals paid $1,000 each, Bleus said. Anyiwo said he plans to make a second trip to Haiti this summer.

The trip will have added personal meaning for UM sophomore Joshua Jean, who is among several Haitian-Americans who have volunteered. This will be his first time visiting the nation where his parents were born.

“Most of my family is still there, so I thought this would be a good opportunity to help,” Jean said, adding that all his known relatives survived the quake. “Everyone’s OK, but still, there’s extensive damage and there’s going to need to be repairs for years to come.”