On 50 scenic acres in Carson, New Mexico, sits the Veterans Off-Grid (VOG) property — a nonprofit organization founded by Ryan Timmermans, whose mission is to restore a sense of purpose, community, sustainability, and peace to veterans in need.

The story of VOG began in 2017 when Timmermans realized his vision and bought the acreage about 35 miles west of Taos. Since then, volunteers have accomplished many goals in their mission to help homeless veterans, help themselves, and promote eco-friendly living.

It’s intimidating thinking about building your own home if you’ve never worked in the building trade. But it’s frightening to think about being homeless. The number of homeless veterans increased across the country in 2020 even before the effects of COVID-19 damaged employment prospects and financial resources.

Timmermans served in the U.S. Army as an Intel Analyst and Psychological Operations specialist. He completed multiple tours to Afghanistan, both as a soldier and contractor. Like many vets, PTSD didn’t give Timmermans a pass. He vividly recalled coming home after his last tour in Afghanistan finding his mind and spirit had fallen into an abyss. “We lose 22 to 24 veterans a day to suicide. I bought this land because I lost two of my friends to suicide,” Timmermans shared. “They deployed with me to Afghanistan. And they lost their mental battle. We didn’t know anything was wrong and then they’re not here anymore. So, if I don’t provide a place for veterans to really feel normal again, who will?” 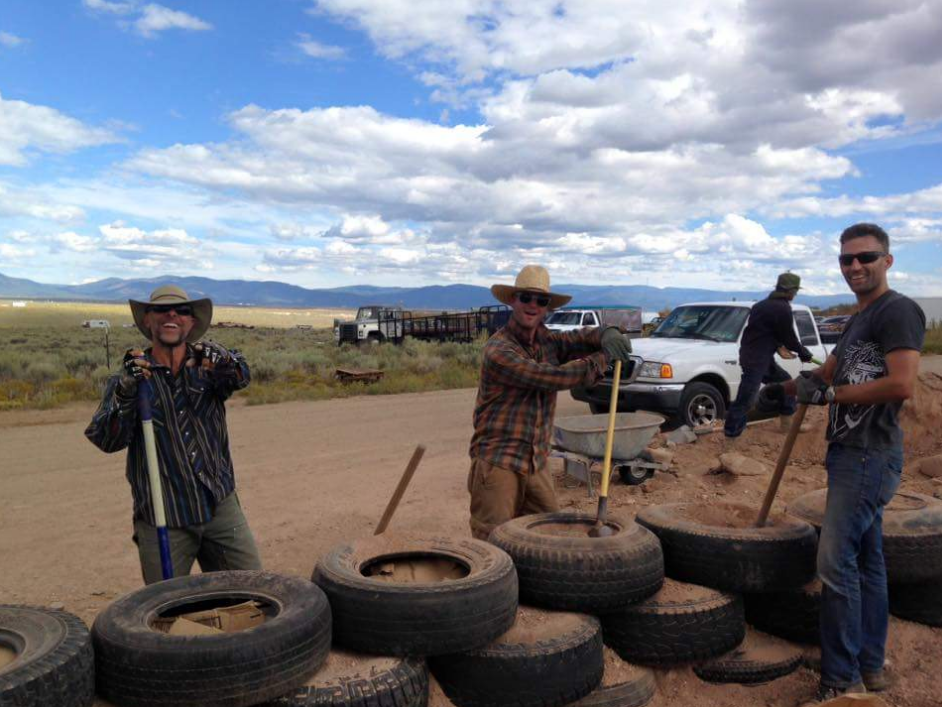 The concept at VOG is that anyone staying there has no bills. No one gets paid for any work they do there. But they do pass it forward by helping build more structures for others to stay in. And through that, they teach green-building skills. Participants can then feel confident in building their own homes and/or getting jobs in construction.

There are a few permanent dwellings on the property so far: the hyperadobe which UNM-Taos students helped build in a collaboration he co-created with UNM-Taos Construction Technology Program Coordinator Mark Goldman; the earthbag; a yurt; and one being built with a tire-wall system. There is also a greenhouse that over the summer nurtured rows of squash, cucumbers, and zucchinis.

They are building one structure of each type of eco-friendly style and materials to not only educate the students and volunteers but to show everyone the seemingly unconventional things that can be used, such as the mesh grocery store bags used for limes and potatoes. “You can use those bags to build an entire house,” Timmermans explained. “Two-thousand feet for $35. You can fill around those with adobe and it dries in a day. Adobe bricks can take up to two weeks to dry. And then you smear mortar in between.” All the dwellings have a “solar mass” aspect to them, which keeps the inside warm. They use a lime plaster mixed with crushed glass for the outside of the buildings. “The more people we can teach to green-build, the more self-reliant they become and the more we help Earth.” 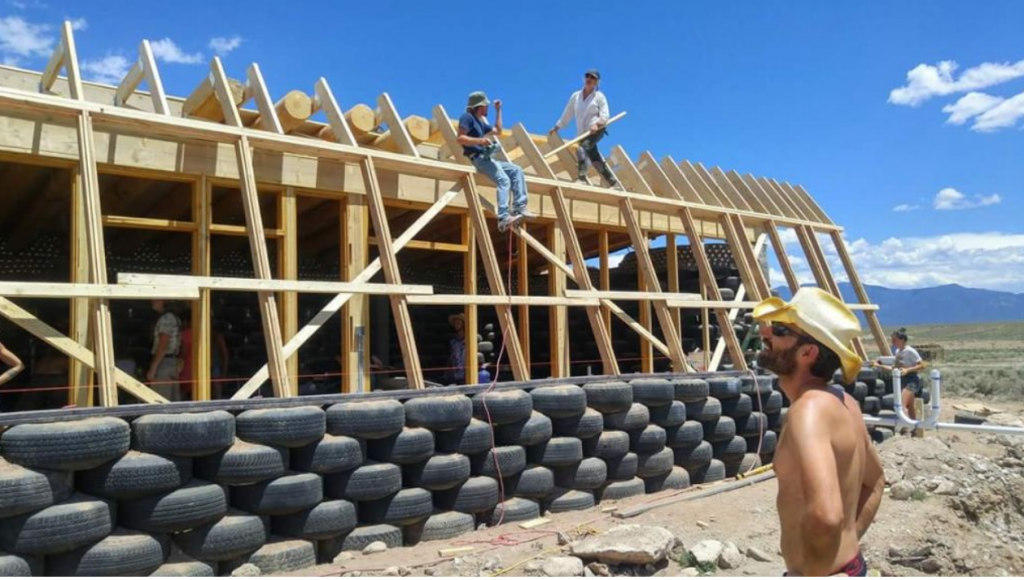 You don’t have to be a veteran to volunteer at VOG. People who come through VOG know they’re going to be OK because they’re learning to be self-sufficient. There’s an undeniable brotherhood. All of the things that are on the property are designed to help a veteran feel normal again. “I take the heavy military aspect out if it and remove the yelling and the forced exercise, and all that kind of stuff. Natural building is exercise and you’re doing it with a purpose,” said Timmermans.

Now armed with purpose, someone is helping the next guy, pulling him up while they’re working together. Someone is eating organic food. A group is sitting around a fire chatting and laughing under the radiant, quiet night sky. Another is thinking about their future — a future of independence and security.

To further his construction knowledge, in 2018 Timmermans took one of Mark Goldman’s construction courses at UNM-Taos. Goldman learned of Timmerman’s mission and started informally helping with VOG. The fruits of their labor have come to fruition. This spring semester marks the “soft rollout” of the VOG program, with a “hard rollout” expected next fall. Initially, the program will feature two courses: Cooperative Education and Design for Green Building.

Cooperative Education is similar to an internship but not one. Goldman described it as “100 percent hands-on work” at VOG. The idea is for this course is to be held both in a classroom and onsite. “Together, they are much more valuable than the sum of their parts,” he said.

Goldman will be teaching Design for Green Building, based solely at VOG. Besides being an instructor, Goldman is a New Mexico state-registered architect and builder. He will cover floor plans, how to make models from designs (such as with a 3D printer, which he also teaches), and a heavy dose of building code education. “We’re in a time with the most code changes going on,” he knowingly said.

And while the typical green-building styles of traditional adobe, hyperadobe, earthbag, and tire-wall systems will be employed, Goldman is open to any green-building method students are interested in trying. He doesn’t want to dictate the solution. He sees it as a real learning experience and that “makes it interesting.”

You can read the original article at taos.unm.edu

7 thoughts on “Veterans Off Grid in New Mexico”