Celine Ramjit is an artist working in eco-architecture, weaving; and tattooing. Now she is building a community and a homestead through an art practice that is immersed in nature.

Ramjit grew up in Trinidad where she started a tattoo apprenticeship in 2013 which revealed the anthropological history of body art. Ramjit volunteered to work for an earthworks project being facilitated by a natural builder from South America; he opened her awareness to art and design in natural building. Since then, she has worked on projects focusing on alternative, regenerative, ecological forms of natural building that use sustainable technology and design. 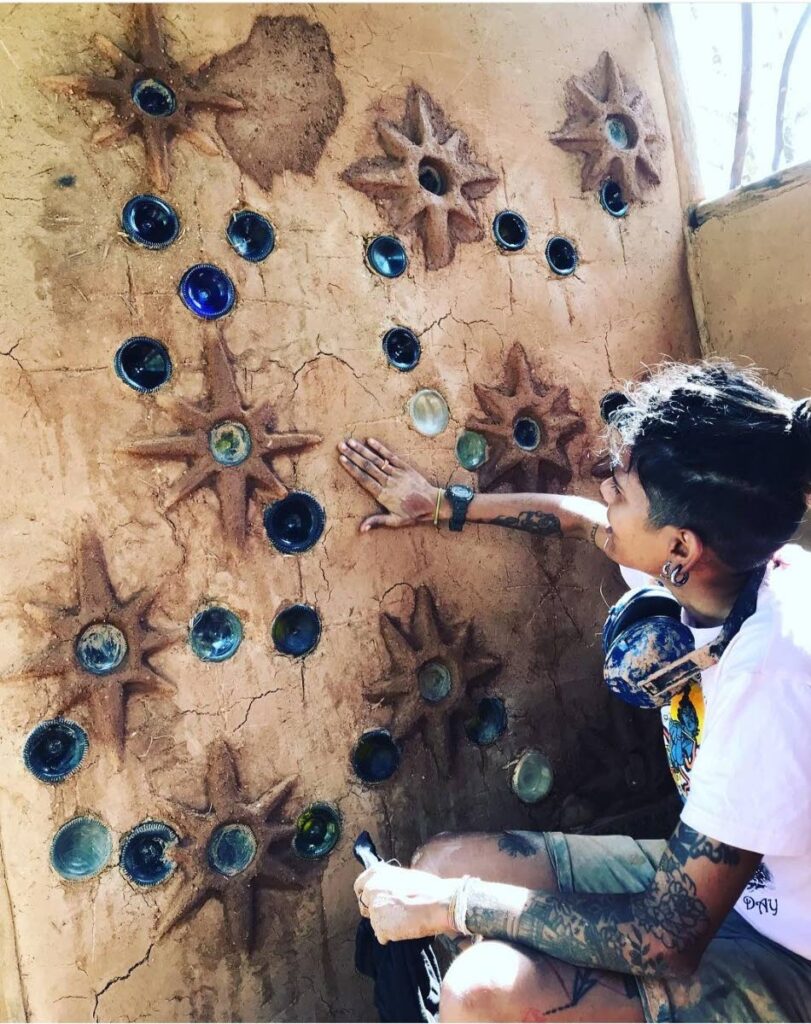 She taught natural building and weaving (native grasses) courses in workshops. Participants got hands-on training in design and application of concepts through practical builds using local clay and grasses; they were encouraged to appreciate the connection of buildings and the home as extensions of Mother Earth.

There are many advantages to working with clay as a building material; it is cost effective and abundant, highly durable, able to store and release heat. It is non-toxic, non-allergenic, with low environmental impact both during and after construction. It is estimated that 1.5 billion people (30 per cent of the world population) live in earthen dwellings. 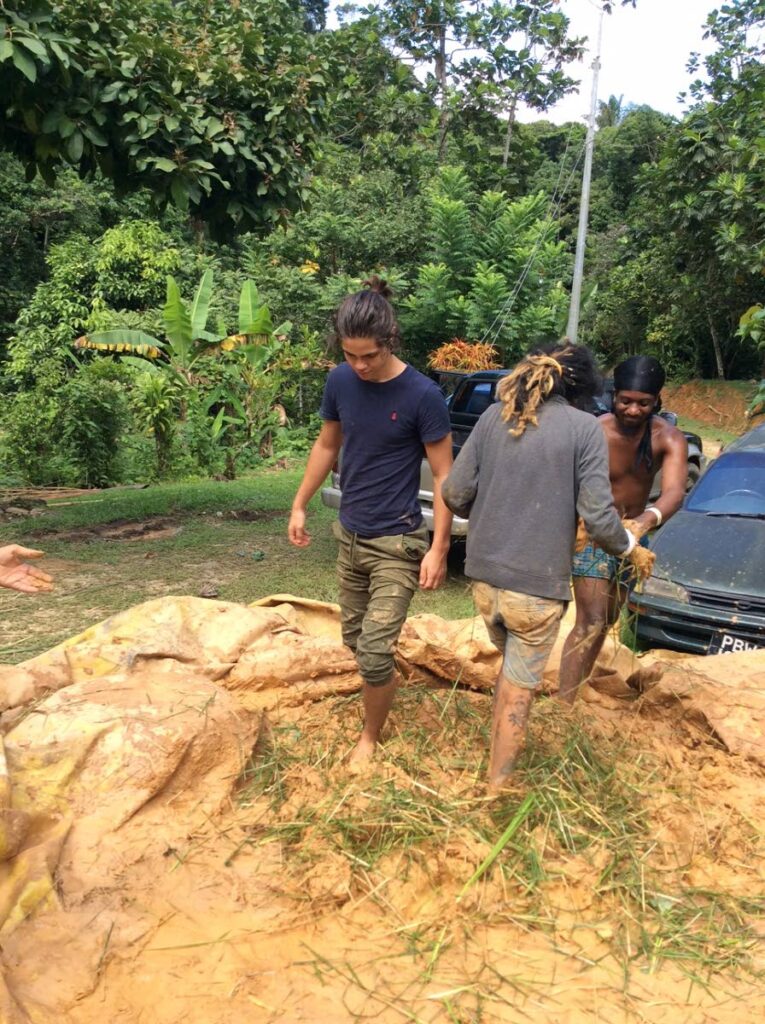 Ramjit was recently commissioned to repair the wall of an outside kitchen. With her guidance, it was rebuilt by her team of eco builders and clay enthusiasts. “You could always re-use material from the original structure by incorporating with fresh clay, grass, wood shavings, whatever is at hand. You have to understand how the materials are combined and work together.”

Other considerations in natural building involve optimum design that considers the environment (natural drainage and water table), the climate (wind and rainfall), and the embodied energy in the maintenance of building through its life.

She rejects the misconception that earthen architecture should be used for small structures, or primarily housing in poor or rural areas. There are examples of multi-story buildings, airports, embassies, hospitals, museums, schools and factories made from clay. Archaeologists have found evidence of mud brick buildings constructed ten thousand years ago in the Middle East and North Africa, with many specimens and forms in Britain, France, the US, Peru, Yemen, Iran, India, Morocco and Mali. In Trinidad these houses are called tapia: they use wooden frames supporting walls from raw earth combined with grasses or bark or wood shavings or manure. 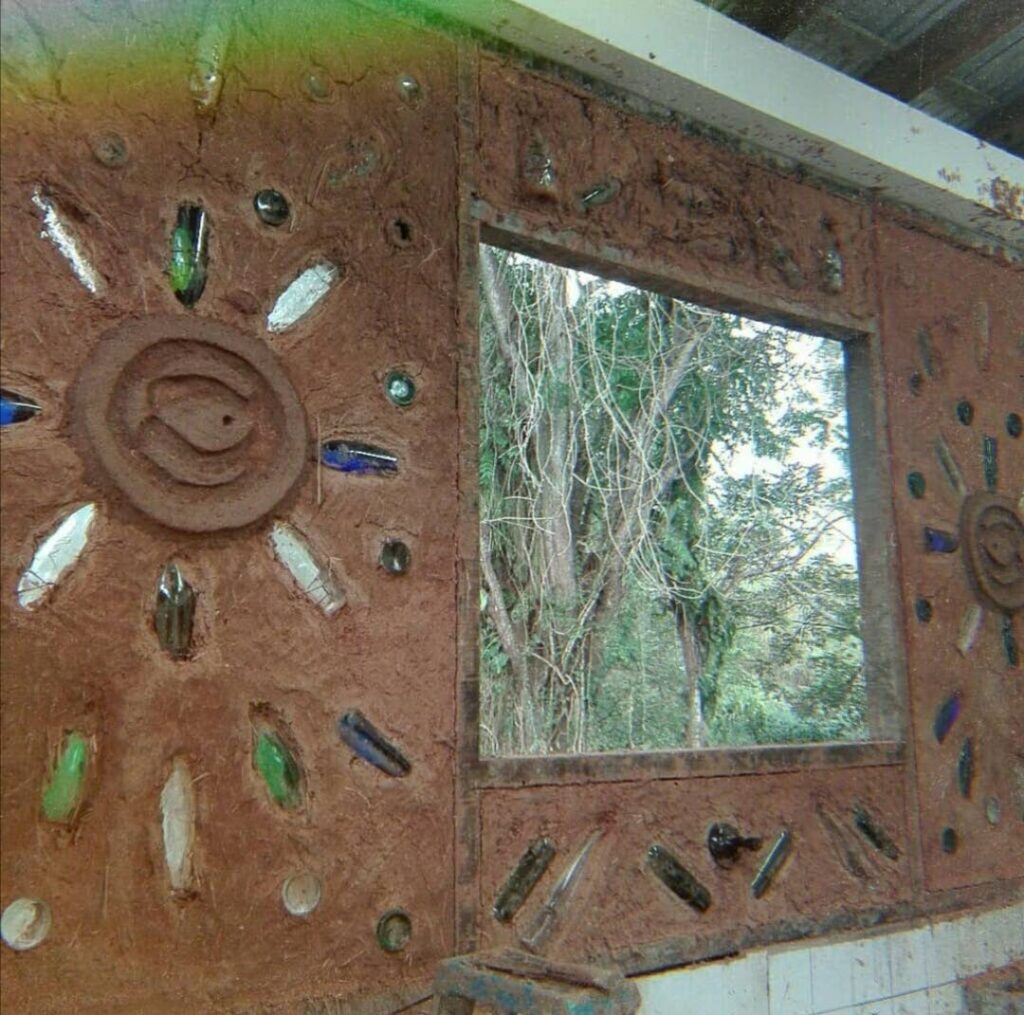 Other materials include timber for the frame, posts and beams; bamboo; straw, vetiver grass; stone or gravel; sawdust, and recycled material such as glass bottles or tires. Additives such as molasses and linseed oil are used to waterproof and seal these structures.

Ramjit believes that building is an art. Consider her bottle walls which emerge as relief sculptures with personality and a narrative. Her earthen wall installations are inspired by work in Shamanism, and the belief in the mystical, living qualities of clay. She believes that earthen works are transformative from the initial design and concept stages, immortal in many ways, healing to the environment as well as to the builder and resident. Her experience of working with clay is grounding, nurturing, expanding imagination, tapping into the creative force.

You can read the original article at newsday.co.tt