I own a few acres of desert property in Southern New Mexico and have often wondered what the underground temperature would be about 6 feet below the surface in this region. Summers can be quite hot and winters are fairly mild, so digging into the ground might be a good way to develop a residence that would be pleasant all year round, with very little additional energy input. To test this theory out, I thought that somehow burying a recording thermometer deep under ground would provide useful information. 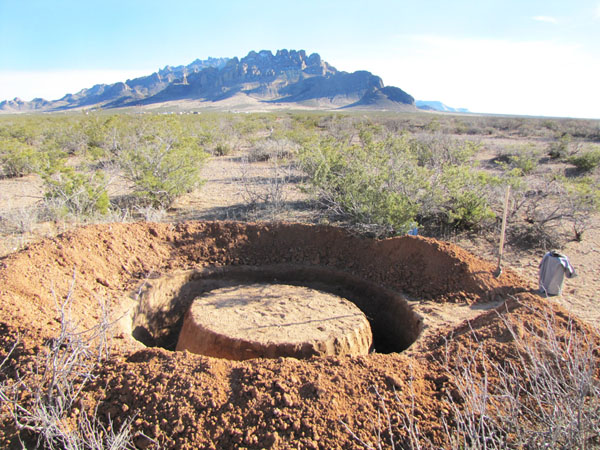 Many people have asked about burying earthbag domes, and unfortunately I know of few actual examples of doing this. So I thought that a fun and informative experiment would be to build a small earthbag dome underground on our property, place the recording thermometer inside, and completely close it up for a year.For this experiment I outlined an 8 foot interior diameter circle in a suitable spot and started digging out  the soil to make a trench wide enough to lay bags into. I hoped that I could continue digging this way easily enough to go perhaps 5 feet down.  The top couple of feet were fairly loose adobe soil that would make excellent fill for the eventual bag work. But the lower I dug, the more compact and rocky the soil became. I persisted however, by pouring water down in the trench and allowing it to penetrate the soil, making the digging easier.

My intention was to build the dome upwards by consuming all of that cylinder of soil eventually. In practice this concept worked quite well. It was easy to place the bags up against the inner wall as a guide, and simply shovel soil directly into the bags from the center. After laying the first course of bags, I stretched a piece of black plastic around the outside of the bags and secured it in place with soil packed between it and the outside of the trench. This would also allow me to expose only that portion of the bag wall that I was working on, and it would eventually provide a moisture barrier on the outside of the dome. 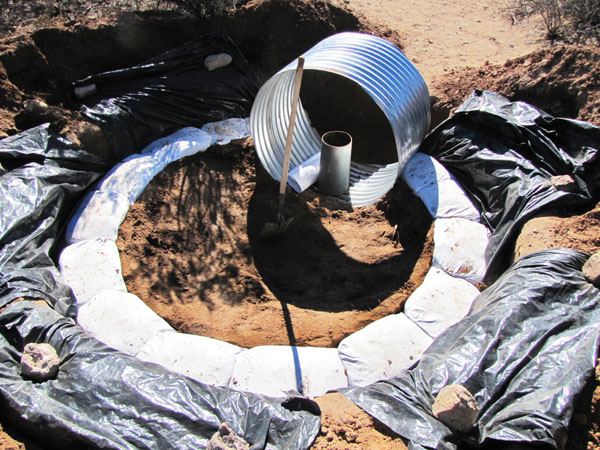 I needed some way to enter the dome once it was completed and I thought that a simple and effective way to make an entrance would be with a section of a large metal culvert. I found a perfect one about four feet in diameter that I salvaged for the project. After the bags were laid up to three courses, I felt that it was time to set the culvert into place.

Each time I completed placing a course of bags, I was careful to pack soil up against it from the outside. As the wall rose, I didn’t want the outward thrust of the dome walls to be able to dislodge any bags. Eventually I needed to use a ladder to carry the dirt up in buckets to pour into the bags. And then pretty soon I had used all of the available interior soil and needed to start using some that was stacked on the outside. 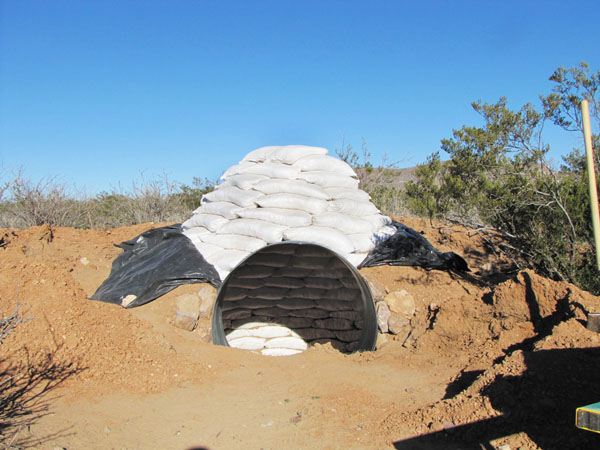 It was exciting to be nearing completion of the dome. I was very careful to tamp the soil (mostly with my feet) so that the entire structure was solid as it rose. The final closure created more of a mound above grade than I had hoped, but it was all quite firm. I carefully set up the thermometer that would record the historic high and low temperature experienced inside the dome. In fact, I buried the probe about another foot deeper under the floor to have an even more accurate reading. Once that was set I proceeded to seal the culvert door with more earthbags so that I could cover the entire structure with more soil. 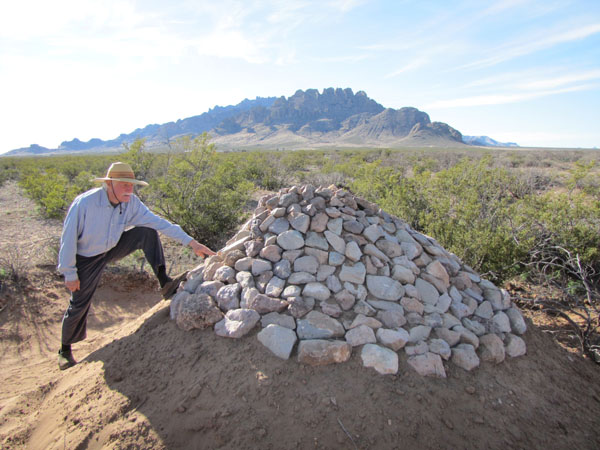 I realized that the top of this mound of dirt was quite vulnerable to erosion from wind and rain, so in an attempt to protect it, I collected rocks from a nearby arroyo and carefully placed them on the peak. This gave the project a distinctly decorative or sculptural look that pleased me.

If we ever decide to develop this property further, this little underground dome could be used for storage or as a root cellar. In this case the doorway and entrance would need to be fixed in such a way that it could easily be entered and kept secure. This project demonstrates that it is possible to create a potentially habitable space with an armful of bags, a sheet of plastic, a piece of culvert and a shovel.

Building this little underground dome is described in much more detail in the book about Earthbag Architecture that I am about to publish and will publicize on this blog.