Liz Hatch is building an Earthship in Greensboro, Vermont. Surrounded by a mass of scrap tires, cardboard and piled fill materials, she said “All this stuff, a lot of it, is just garbage.” She had been trying to live sustainably in her 19th-century Massachusetts home, converting it to geothermal energy. “I have wanted to minimize my footprint,” she said. But she wanted to go even further and the Earthship concept seemed ideal. 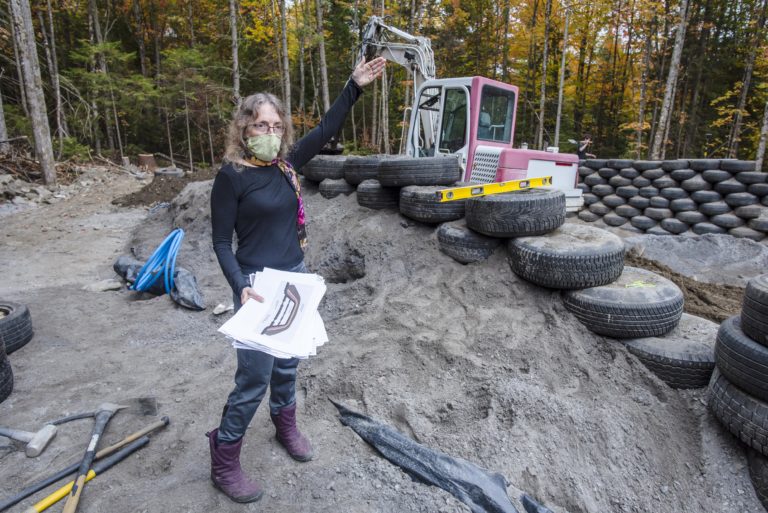 She enlisted the help of Regenerative Retrofits — a building group led by Brenden McBrier — and since the summer the crew has been working three days a week on the planned 800-square-foot home.

With Earthships, tires are used like bricks (Hatch’s project calls for about 700 of them) and the walls of the home will eventually reach 13 tires high. The cardboard is placed into the bottom of each tire, then  the space is filled with dirt, packed with sledgehammers and shovels.

Between exterior windows and glass interior walls will be a greenhouse. This will act to capture heat from sunlight so it can be released into the building when the sun is away.  “The design turns the house itself into a battery, basically, allowing the inside temperature to moderate over time.” Hatch said. “This house will have an average temperature of somewhere in the 60s.”

She sold her old home to fund construction of the new building, which she said will cost about $40,000 to complete.

James “Buzz” Surwilo, an environmental analyst with the state’s solid waste program, said Earthship buildings could be one way to address tire recycling in Vermont, a longstanding problem. Vermont banned tires in landfills in 1992, and because there is no in-state processor, about 700,000 scrap tires each year are sent to Maine, New York and Massachusetts, he said. Most scrap tires are chopped up and burned for fuel, he said, when they could be used in a more eco-friendly way.

McBrier, head of the construction crew, has been working on Earthships for about 10 years. “The idea that homeowners can do it themselves” appealed to him, he said, as did the community-minded spirit of the building style. “You’re using a product that would be burned or buried,” McBrier said during a break. “You’re giving value to a wasted object.”

You can read the original article at vtdigger.org

3 thoughts on “An Earthship in Vermont”