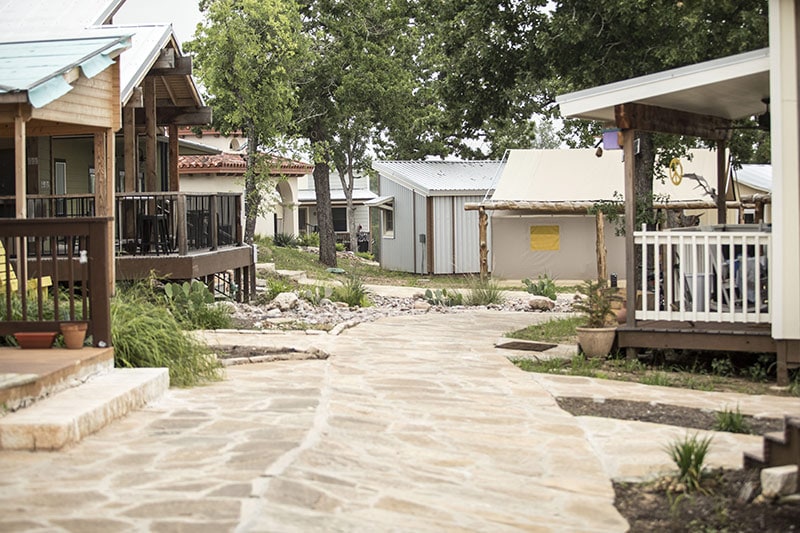 When Alan Graham refers to the residents of Community First! Village as “neighbors,” he’s speaking about the community created in this enclave of tiny homes, micro-homes, and RVs soon to expand beyond its 51-acre plot in East Austin, Texas. Graham was a former real estate developer who launched the faith-based social outreach ministry Mobile Loaves & Fishes in 1998 to serve Austin’s homeless community. He conceived of the neighborhood as a way to help people transition from chronic homelessness. “I started developing pretty deep relationships with men and women out on the streets,” Graham says of his work. “In 2003, I started spending the night out on the streets. I’ve personally spent about 250 nights there.” He learned that the greatest cause of homelessness is a profound, catastrophic loss of family. “I learned that the greatest yet most ineffective entrepreneurs on the planet are the panhandlers standing on the street corners, relegated to doing the only thing that we allow them to do now, which is the First Amendment free speech right to beg,” Graham says. Nearly 350 individuals formerly experiencing homelessness reside in the village, which provides permanent housing and sits just outside Austin’s city limits. The village’s retention rate for residents is about 88%. Through a series of new investments, Community First plans to soon triple its footprint.

Graham started the village by helping set up one homeless man with an RV to live in. Then, he did the same for several others. By 2012, he secured 27 acres of land to build what became the neighborhood’s initial phase. It’s since grown to a community of about 350 occupied units, mostly single-occupancy, though there are some couples among the formerly homeless residents. Graham and his wife live in a modest Community First home among their formerly homeless neighbors—a stark contrast from the Westlake neighborhood where they lived for 34 years while Graham worked in real estate. Graham declares Community First to be the best neighborhood he’s ever lived in.

Community First launched as a primarily private venture, with Graham lining up angel investors to seed the vision and partnering with companies to create houses and provide needed materials for maintenance and upkeep. A $36.6 million grant from the Michael & Susan Dell Foundation, announced last December, will anchor MLF’s plans to create an additional 1,400 homes for the homeless through a $150 million capital campaign, calling it “a significant next step in delivering upon our broader Ten Year Plan to Mitigate Homelessness in Austin.”

The city of Austin is now stepping in with fee waivers totaling more than $4 million for the planned next phases of MLF’s community-building work, but even today, the upcoming phases will be largely donation-driven. The community itself generated $1.2 million last year through the various micro-businesses  established in the village, employing a number of its residents in the process. Community First has an art studio—including two kilns for firing pottery and a jewelry-making station leading to a collaboration with famed Austin jewelry magnate Kendra Scott—that creates revenue and provides artists in the community a creative outlet.

The village also has what is essentially a tiny home hotel created near its entrance, serving as vacation rentals for people visiting Austin, with residents serving a range of roles to help operate it. There’s even an auto shop on-site where people can bring their cars in to be repaired or get annual state inspections required for vehicle registration. Residents are expected to pay their way, though rent and utilities are scaled to enable homeless people to transition into life at Community First! Village—once they get through the three-step process to be admitted. First, a prospective applicant goes through a coordinated assessment with one of several Austin-based homeless-serving agencies that  determin that the applicant is chronically homeless and living in the county for at least one year. Community First residents average nine years on the streets before getting into their homes, and according to Graham’s estimate, anywhere from 70% to 80% are receiving either federal disability, social security, or veterans benefits. Step two involves the prospective applicant touring the neighborhood to determine if they want to live there. Finally, if the person wants to apply, they fill out an application and join the waiting list. Each new house is furnished and is even decorated with the resident’s preferred color palette and tastes. And once a resident is in, that person can stay as long as they can maintain their rent and utility payments and live civilly among their new neighbors. You can read the original article at www.yesmagazine.org

Also see this blog post about the village: naturalbuildingblog.com