Over one-third of the world’s population still lives in mud homes made with mud, but their popularity has been steadily declining. A recent survey conducted by scientists from India and The Netherlands found that cement’s popularity and availability were the main reason. It is a matter of “societal image” that is the key barrier to accepting earth as a building material.

But mud may yet make a comeback. India’s housing shortage and the critical need to reduce carbon emissions are driving many to reconsider. The Indian government aims to achieve housing for all by 2022, but with the cost of cement and concrete rising this seems a distant goal. 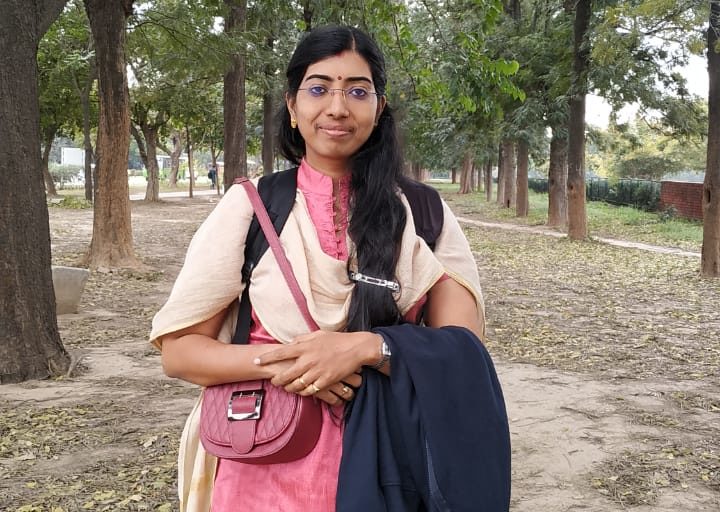 According to Lekshmi M.S., a research scholar in civil engineering, the advantages of mud are multifold.  Besides its eco-friendliness, it is also known to keep the indoors cool and is much more economical. “Unlike burnt materials such as bricks, mud possesses the unique property of breathability,” says Lekshmi. “This improved the indoor air quality and comfort for inhabitants.”

It is reported that usage of traditional materials like mud, laterite, and lime for walls in Kerala decreased from 63.7 percent in 1961 to 30.4 percent in 2001. Lekshmi noted, “Though mud constructions are strong and durable, people are skeptical about the reliability aspects. In addition, the lack of skilled labor may result in poor aesthetic appearance with bulges and cracks demanding proper maintenance.” She realized that proper selection, testing, and stabilization of soil with fibers from agricultural byproducts like straw could overcome many of the technological challenges of building with mud. She  sees this as a way out of two global dilemmas – climate change and agricultural waste disposal.

Unfortunately, the idea of poverty is entrenched with earthen housing; bamboo, mud, grass, reeds, thatch, etc. are treated as an official indicator of deprivation in the formulation of the poverty line. For earth to be considered a practical solution to the current housing shortage, it is important to promote construction using local materials and provide consultancy and knowledge for safe construction with the earth.

The Thannal Mud Homes Trust is a natural building awareness group founded by Sindhu Bhaskar and her architect husband Biju in 2011. After years of workshops, interactions with traditional masons and artisans, and building projects that included their own earthbag home built entirely with natural materials, Bhaskar and her team are now working along with scientists like Lekshmi M.S. to discover and document the scientific basis of their mud success stories. 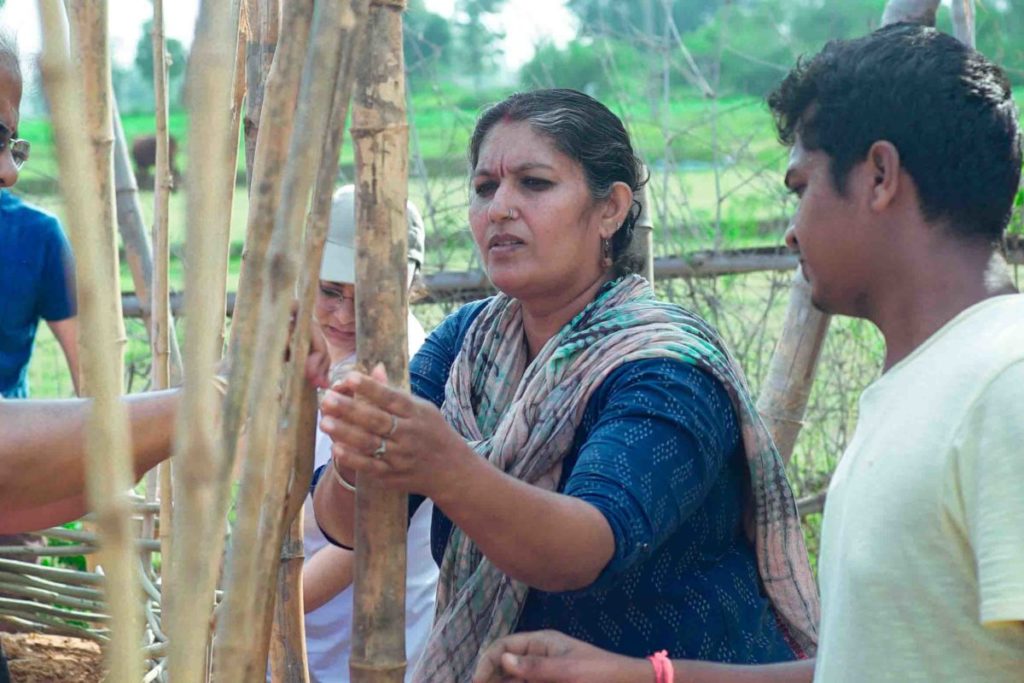 Bhaskar is most known among the community to be a virtuoso with plasters which can be thought of as the skin of the building. They are the key to protecting the structure from harsh environmental conditions and they add aesthetic value to mud buildings – this is significant considering the role of ‘image’ in the public’s resistance to mud homes.

After years worth of trial-and-error, Bhaskar and her team have developed and refined five different recipes for plasters. These use different proportions of mud, lime, and other natural materials such as cow dung, egg whites, aloe vera, and fibres. Their work is based on age-old ideas such as how cow dung has been used since ancient times as an insecticide and a waterproofing agent; similarly, cashew nutshell extract has been used as termite-proof for wooden door frames and is an excellent antioxidant.

The popular practice of mixing mud with cement needs to be re-evaluated, believes Lekshmi, “It is true that the addition of cement can enhance the strength and durability of mud, but at the same time, it will deprive us of the inherent natural properties of mud. The moment cement is added to mud it becomes no longer breathable. A combination of lime, natural materials, and bio-extracts would be more compatible with mud than cement.”

When restoring old buildings, Selvaraj has one mantra – know the properties of the materials and the technologies that were used to build them. This is where her specialty lies – in identifying materials used, finding its properties, and understanding how it was processed. Based on this information, she looks for locally available materials that are most suited to restore the original structure. “Respect the original architect,” she stressed. 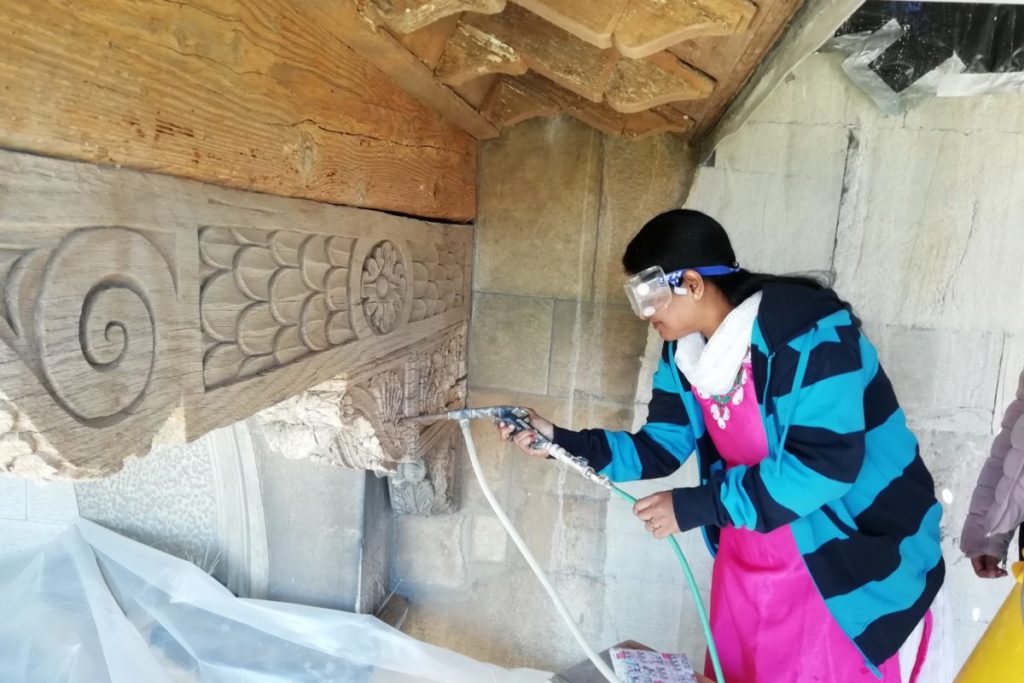 One solution that Thirumalini Selvaraj, a civil engineer, repeatedly encounters in her job is lime.  Besides being an effective, breathable, and healthy building material, it is recyclable. Within the structure, lime hardens with time as it sets back to limestone and during this process it absorbs carbon dioxide from the atmosphere.

Selvaraj faced the daunting challenge of deciphering the cocktail of natural extracts used to strengthen the limecrete (similar to concrete, but with lime instead of cement). “We needed a lot of data to accomplish this. Eventually, she was able to determine which fermented plant extracts and hemp fibers were used by the original builders.”

It’s not just for heritage buildings that Selvaraj sees value in natural building materials. “People think that cement is good because it is stronger. This strength may be needed for high-rise buildings but not for low-rise ones,” she says. Bhaskar and her team are proving that a cement-free natural home is possible and practical – and according to her, anyone can do it. “You don’t have to be a learned man or someone with great dexterity,” says Bhaskar. “Thannal’s aim is to give this back to regular people, to convey to local people that they can build a small home themselves. How can a family live in a place content and comfortable – that is all we are teaching.”

You can read the original article at india.mongabay.com

3 thoughts on “Natural Building as a Solution for India”