Cocoa husks, dried orange peel, and ground blue pea flowers are among the ingredients that constitute a new class of building materials that could revolutionize construction. Not only are they biodegradable but some also absorb toxins. They are waste products that are used to make “Orb”, a sustainable building material that is carbon neutral. It can be used for furniture or as a substitute for a wood-based sheet material. 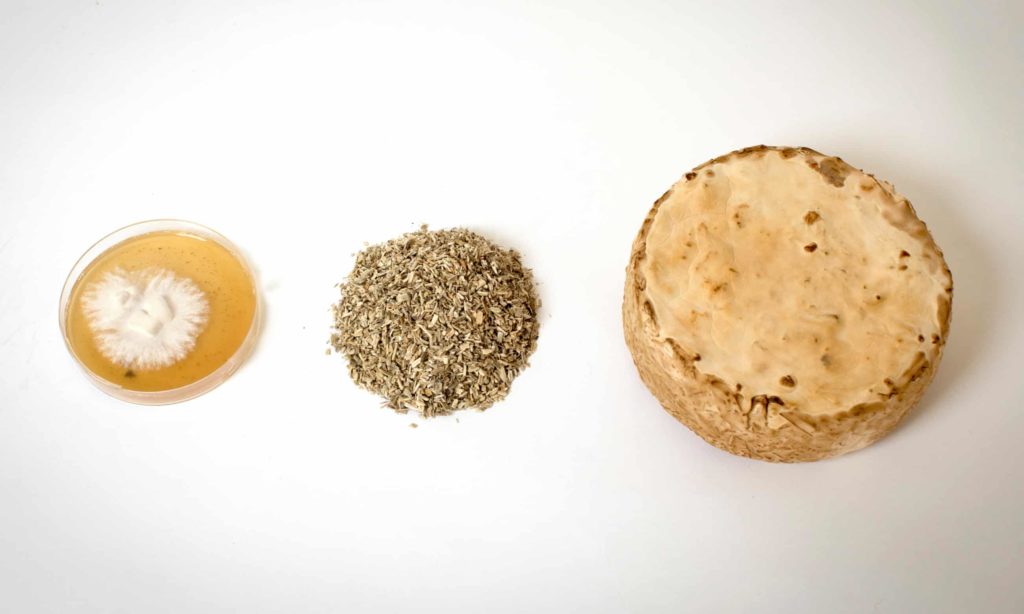 (From left) pure mycelium cultures at the Biohm lab; hemp shiv; and a mycelium puck for testing color, strength and texture.

Orb is produced by Biohm, a startup founded in 2016 by Ehab Sayed, who grew up in Doha, Qatar, and says his home town is one of the “biggest motivators” for him to inspire change. “Although it is the richest country in the world, it is likely one of the least sustainable and a contributor to the climate crisis,” he says. “Growing up in this environment resulted in a resentment towards the impact we are having on our planet. I have always been shocked at how manufacturers and material developers don’t extend their responsibility to their product’s end of life and how inefficient our waste management processes are. The concept of waste has never made sense to me,” he says. “It is a human construct that has resulted in major problems.”

During his studies Sayed explored which industries caused hazardous levels of waste in the UK. “Everything pointed towards construction,” he says. Then he looked at the environmental impact of waste materials. “That was even more shocking,” he says. He decided that the way to tackle this is to create buildings from natural materials. “I started exploring what could be used, knowing that I absolutely had to find a solution for structural materials, insulation and sheet materials.” 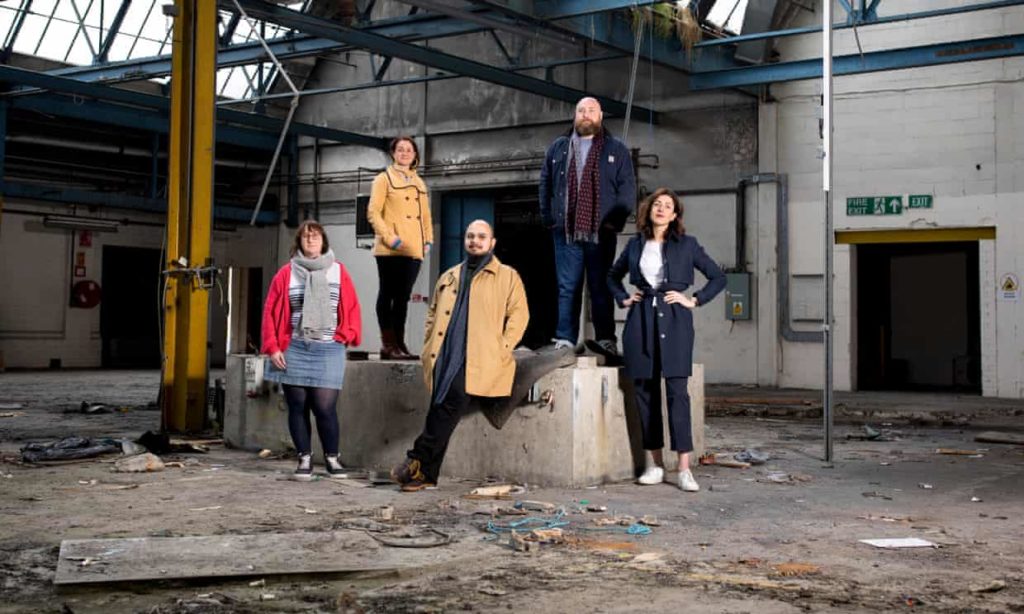 From left: Sally Lowndes and Naomi Griffith from the Onion Collective, and Biohm’s Ehab Sayed, Harry Darkly and Oksana Bondar.

With a small team of designers, engineers and scientists, he has developed two materials: Orb, made out of food or agricultural waste, and mycelium insulation, made by feeding waste to the root system of mushrooms.

“The aim is to replace every harmful construction material with something sustainable and higher performing,” Sayed explains. So far, mycelium insulation outperforms almost everything on the market. “The only thing it doesn’t outperform is polystyrene, which is flammable and there are specks of it all over the place.” Sayed said. Sheet material and insulation are just two of the products being manufactured. Plant-based concrete is also in development.

The waste used by Biohm comes straight from industry. For instanced orange peels are collected from the staff canteen of a tech giant and the grass cuttings are collected from a London airport  The orange peel board – which is cork-like in texture and varies in tone from warm honey to rich brown, depending on how long the peel has dried for – is then sold in the form of panels, tiles and risers. 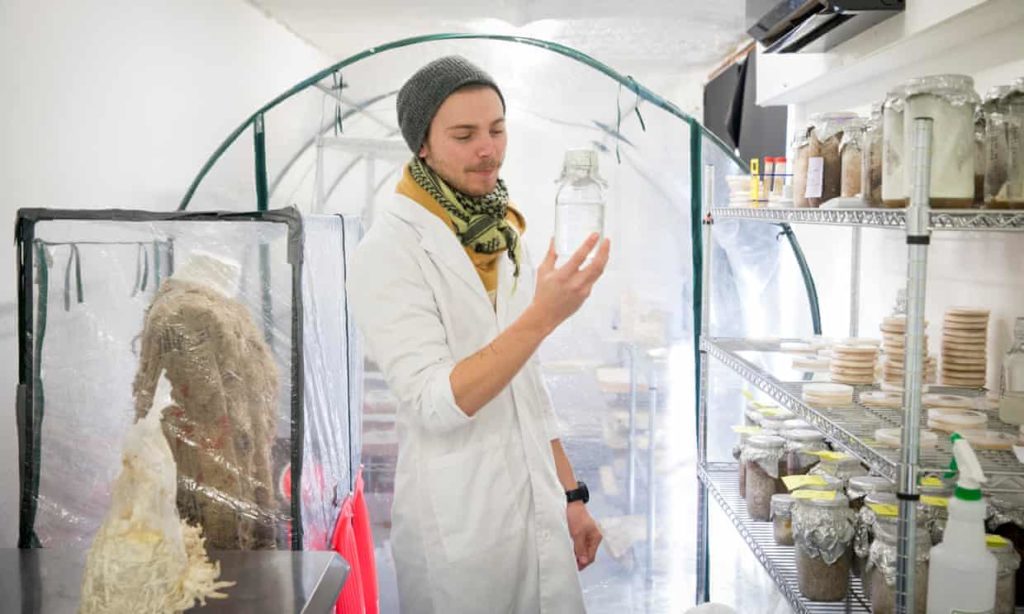 Mycelium insulation can be grown from more toxic byproducts because it can break down petrochemicals into harmless hydrocarbons, which are then absorbed into the material. When they were developing a strain of mycelium in the lab it slowly grew out of its jar and consumed a nearby plastic sponge. “When we cut the mycelium open, there were absolutely no remnants of the sponge at all,” Sayed explains, “just a small square where it had been.” 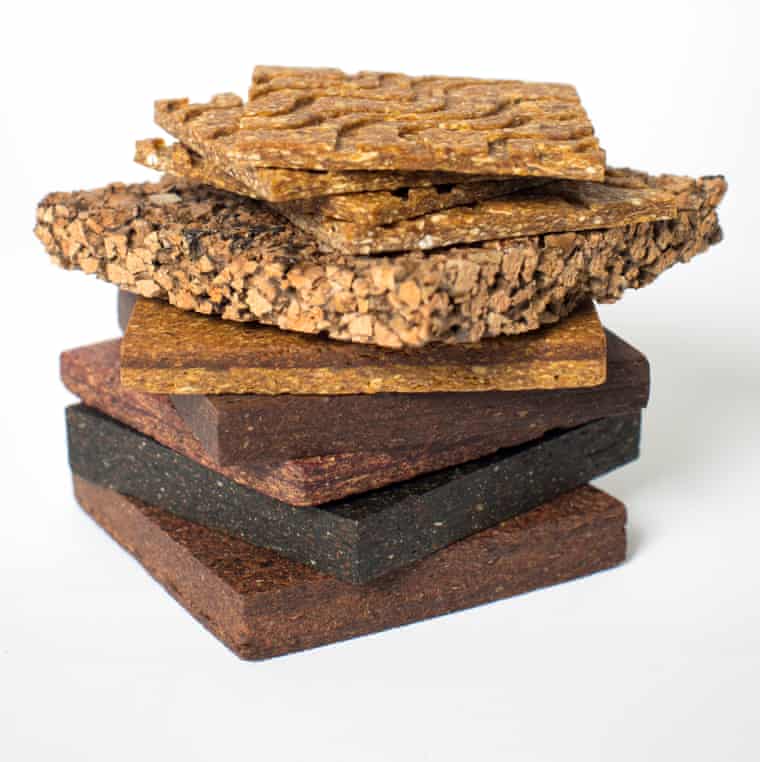 Samples of Orb made from food or agricultural waste.

“Because we’re working with natural living organisms that do most of the work, there is very little machinery involved,” Sayed says. Much of the equipment set up in the lab has been adapted from the food and agriculture industry. There is what looks like a huge bread mixer and a standing press for molding the boards.

In another lab are jars of mycelium covered in foil lids. Sayed explains that there are up to 5 million species of mycelium in the world. Biohm is developing around 300 strains that have been gathered by hand from forests and gardens. They begin the growing process by feeding the mycelium with a nutrient-rich food source, such as grain. This is then mixed with a substrate (the waste product), to see how well it grows. Those that perform well are cloned and developed further by Biohm’s biotechnology engineer. 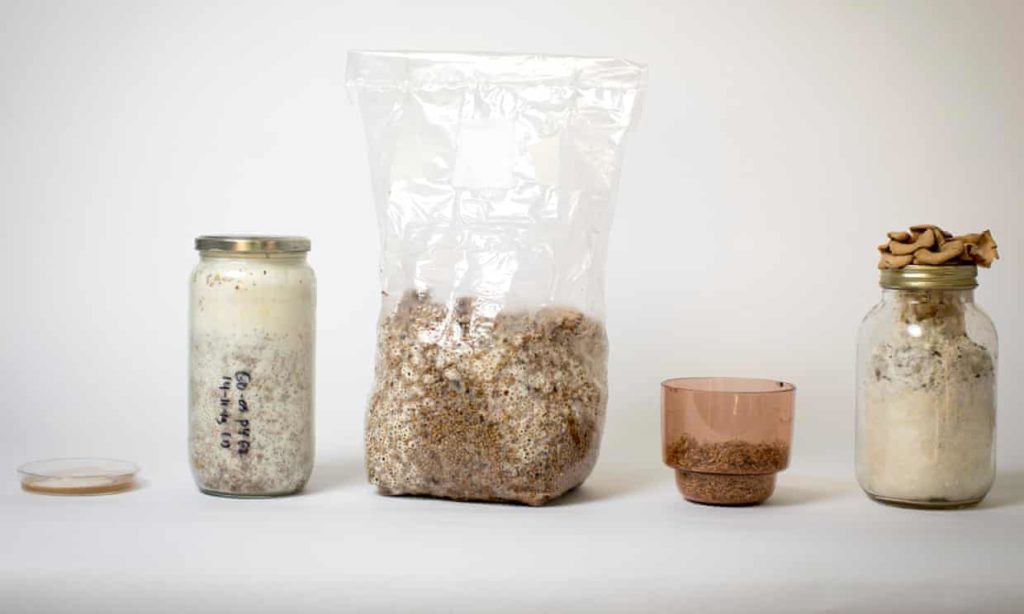 Because it involves so little machinery, products can have high profit margins and a double revenue stream: Biohm is paid to collect waste and can sell the material created from it. As a result, Sayed claims its products can compete with everything in the market. Customers are contractually bound to return any materials to Biohm at end of life – they are collected free of charge (the cost of this is built in). “This is how far the manufacturer’s responsibility should extend,” insists Sayed.

Biohm will open its first mycelium production facility outside London, in a disused paper mill. “We’ve always wanted to have social impact embedded in our business model – we just didn’t know exactly how we were going to do that,” says Sayed. In its second year, Biohm was contacted by the Onion Collective. They were looking for a pioneering biotech company with global ambitions to replace the 175 jobs that were lost when the town’s paper mill closed in 2015.

At the old paper mill, 3,000 sq m of mycelium insulation will be produced per month – enough to sequester 16 tonnes of carbon. “Just by creating the material, we’re having a positive impact,” says Sayed.

All photos were  taken by Alicia Canter of The Guardian

You can read the original article at www.theguardian.com